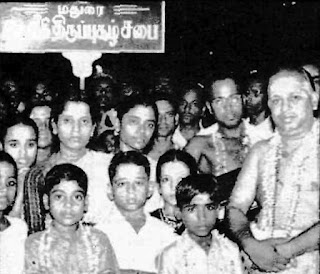 TN Seshagopalan’s mother was his first music ‘guru’, and she taught him many songs of the bhajana variety, but little did she imagine that he would become a classical concert musician one day. Her exposure to such concerts was limited. Seshagopalan himself did not have too many opportunities to attend concerts; he heard Mali once when he was six or seven. Alathur Brothers, Madurai Mani and GNB were the other stars he did listen to “live”. The radio was a different matter. The young Gopu, as he was called at home, loved listening to it and had enough discrimination even then to shut it off when it broadcast second rate music of any kind.
This listening habit begun in childhood stayed with Seshagopalan through the years. Though he did not admit to being influenced considerably by any musician, he confessed Ariyakudi was his favourite. Rather than any one aspect it was the overall impact of his music that appealed to TNS—to such an extent that he heard a recording of Ariyakudi’s Subrahmanyaya namaste at least a hundred times.
When he was six or seven Gopu joined the Padmalaya Bhajana Troupe led by Sri Rajagopala Iyengar, a prominent lawyer, and consisting mainly of his fellow practitioners. Every Saturday his mother took him there where he became quite an adept at the bhajana paddhati, flourishing under the benevolent, encouraging care of the other devotees. He was also enrolled in a Tiruppugazh hymnody group. With these two troupes he often travelled outside Madurai to participate in their performances. He was invariably the star attraction, being so young and talented, but he also came in for adverse criticism for having ascended the stage before learning the essential aspects of Carnatic music, such as raga elaboration and swara singing.
In his own words:
“I went to a school called the Sambandhamurthy Elementary School where I received much encouragement from the Headmaster Sri Ganapathiah Pillai. He taught me Tiruvachakam and Tevaram and made me sing to the rest of the class when he took the Hobby class for us. He was keen on music and believed in nurturing young talent. The day before the arrival of the District Educational Officer at the school, he would tell me: “Tomorrow you have to sing Tiruvachakam, so don’t you go home and drink iced water. Be here at nine in the morning; no playing kabaddi then. You have to sing at ten.” He was a gigantic man, dark complexioned, with streaks of sacred ash on his forehead, his attire consisting of dhoti and short sleeved shirt. Though stern of appearance, he was a soft-hearted man, a good teacher. On Saturday afternoons he would take me home and make me sing before his family.
“After school, my daily routine included an evening session at the Tiruppugazh Sabha. There my talent was spotted by one D.V. Subramanyam, also known as DVS Iyer, who organized concerts at important temple festivals in Madurai. I don’t know what he did for a living; perhaps he was a landlord. He was convinced I should be given a chance to perform as a soloist. So, through his efforts, I sang at an annual festival organised by Punalur Subrahmanya Iyer for Sabarimalai pilgrims at Kulathuppuzhai on Chitra Vishu day, when I was just seven and in my third class. 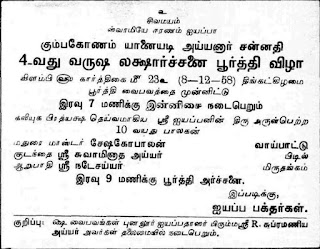 The occasion must have been memorable for young Gopu. Two thousand people brought together by religious fervour and reports of this sensational young singer waiting in an expectant hush. The boy, his hair neatly plastered, his loose-fitting, short-sleeved shirt and slightly outsize knickers pressed specially for the occasion, ascended the stage and sang in a clear voice untouched by nervousness or fear. The songs came in a cascade, the accompanists beamed approval and the elders of his own troupe proudly looked on from the wings. Spontaneous and continuous applause rent the air. Seshagopalan assumed a wistful expression as he recalled the thrill he experienced on the occasion of this concert held on the bank of a river that had to be crossed on a raft for the devotees to reach the temple on the other bank.
“That was my first solo effort. It was a two-and-a-half hour affair before a crowd of two thousand people. In the place of raga alapana which I wasn’t trained to perform. I sang a viruttam preceding each song: a viruttam on Murugan before a song on him, a pasuram before an ‘Oothukkadu’ composition, and so on. Every little detail had been written down by my mother, who could not attend. There was much praise at the end of the performance—obviously the child’s voice and slight frame evoked kind feelings in the hearts of every one.
Young Seshagopalan was not very good at games and spent most of his spare time on his music, which he enjoyed. In the wake of the Kulathuppuzhai concert came several opportunities to perform at surrounding semi-urban centres. Tanjavur Narayanaswami, a family friend, was mainly instrumental in arranging these concerts at places such as Rajapalayam, Vattalagundu and Kumbakonam.
Gopu also sang at Ayyappan pujas at temples. His mother who had lived in Trivandrum, during her childhood, knew many Ayyappan songs which she taught him. (She had learnt Ashtapadi, Tarangini and similar works from Sivaramakrishna Ayyar at Nagapattinam). She sang with a nice blend of hhakti and sangita.
Seshagopalan’s acumen was by this time sharpened to the extent of identifying the ragas as soon as a kriti was begun. At a Kumbakonam concert he was accompanied by no less than Alwaye Natesa Iyer, guru of Umayalpuram Sivaraman, on the mridangam. TNS dispensed with the violin accompaniment when he learnt to play the harmonium at the Tiruppugazh Sabha. So, in a manner of speaking, he accompanied himself.
Posted by Sruti Magazine at Friday, July 13, 2012