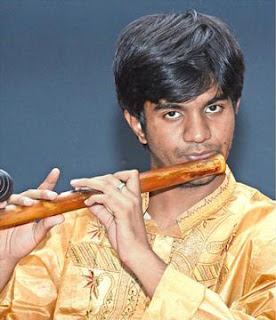 20-year-old flautist JA Jayanth will surely find a place in Carnatic music’s list of child prodigies, as he made his concert debut when barely seven. His talent is hardly surprising as he is the grandson of senior flute vidwan and Sangeet Natak Akademi awardee TS Sankaran, a disciple of TR Mahalingam, the man who revolutionised the pullankuzhal tradition.
Today a promising  young concert musician, Jayanth has received much praise not only for his  knowledge and creativity but also his fingering and blowing technique, which enables him to switch smoothly between the normal and bass varieties of the instrument. Jayanth also has a keen understanding of raga swaroopa and sensitive feel for the lyrics of the kritis he plays.
Jayanth was barely four when his late grandmother vidushi VS Sundari gave him his first music lessons. His grandfather started him on flute learning when he was five, embracing him in a particularly warm guru-sishya relationship.
In addition to being a regular at sabha cutcheris, Jayanth is also frequently featured on radio and television. He has been accompanied by many senior violinists like M Chandrasekharan, Dwaram Mangathayaru, Vittal Ramamurthy, Sikkil Bhaskaran and S Varadarajan and percussionists of the calibre of Guruvayur Durai, Tiruvarur Bhakthavatsalam and the late Vellore Ramabhadran.
Jayanth has won a number of honours including the awards of Best Instrumentalist at the Music Academy and Carnatic Idol of the Year 2007 from Carnatica and Raghalaya Trust, and a Ministry of Culture scholarship. He has been featured in three CD albums.
Jayanth appears to be a young man with eclectic tastes, enjoying listening to good music beyond his own Carnatic tradition, a positive factor in the popular tukkada segments of his concerts.
Sruti Magazine at Thursday, September 06, 2012
Share