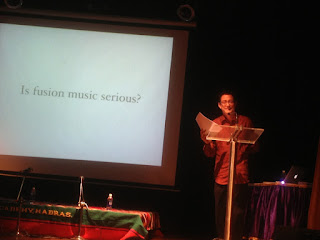 Professor David Claman opened his lecture on “The Concept of Fusion Music with respect to Indian Classical Music” by greeting the audience with namaskaram, vanakkam and namaste. According to him, real fusion started when Jazz and Rock musicians collaborated and formed a new genre of music called ‘Jazz Rock Fusion’. He also mentioned the record West meets East by Ravi Shankar and Yehudi Menuhin, one of the first releases of fusion that combined Carnatic and Western styles of music.

Mr Claman began by looking at the Greek worldview that he described as the Margin and Center Paradigm, with the Greeks at the centre of a universe inhabited by barbarians. In the Separation-Reunion Paradigm, east and west were together many millennia ago, have now been separated and will at some point in the future merge again. He also put out Ananda Coomaraswamy’s vision of a modern and scientific west fusing with a spiritual and traditional east. Mr Claman called these theories “false dichotomies.” The professor also dismissed the common notion that Indian music is based on melody while Western music is based on harmony.

“It wasn’t fusion, but total confusion.” These were the words spoken by a Carnatic musician after performing a fusion concert. Claman attributed the confusion to the lack of preparation and practice before most fusion concerts. This can have disastrous results. Carnatic concerts need no rehearsal as all the artists know most of the kritis. It is the same in Jazz where artistes know the major works and therefore have the scope to improvise. However in a fusion concert, the artists don’t know each other's standard pieces, and each therefore needs to spend time learning, understanding and practising the other system...

One of the first fusion releases was by Shakti founded by L Shankar and John McLaughlin. Their collaboration was a success as each artiste trained in the other’s style of music. Claman says you can notice the differences in each person’s style, yet they combine seamlessly. Claman played a song from ‘the Shakti album in raga Chalanatai to demonstrate this point. He said that Jazz and Rock artists look at the scale of Chalanatai as a pentatonic scale with added ‘chromatic passing tones’ used to seamlessly slide between tones. These passing tones are given less importance by the jazz performers. Shankar took it as a heptatonic scale and improvised. Thus the artistes improvised and their approaches to the scale were different in ways that reflect their musical backgrounds. They skilfully combined the two systems because they had knowledge of each others systems and we can still distinctly tell the difference between the two styles. Another great experimenter was the legendary Jazz trumpeter, Miles Davis, Mr Claman noted in passing.

Mr Claman concluded by playing snatches from the music of the Madras String Quartet led by V.S. Narasimhan, Bombay Jayashri with Eero Hameenniemi and Guitar Prasanna with Vijay Iyer. He said that these artists look very promising in the area of fusion music. The most important message of the presentation was that collaborators in fusion efforts must spend some years together playing, improvising, listening and learning each other’s music, in order to be taken seriously.

Overall it was very enjoyable but very different from the normal Music Academy lecdem. I also loved the way Mr Claman peppered his talk with Tamil words here and there.
Posted by Sruti Magazine at Monday, December 24, 2012