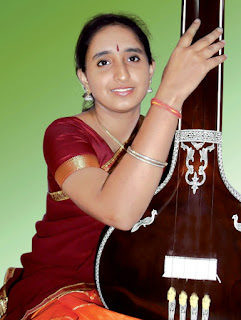 The pursuit of any form, music for example, requires many attributes –talent, interest and involvement, good teachers, a congenial domestic atmosphere, an abundance of opportunity, and not least, Lady Luck. Twenty one-year old vocalist Aishwarya Shankar possesses all these plus a clear focus towards classicism in music.

This Kolkata born and bred girl who completed her schooling in that city shifted to Chennai to further her music training. While most musically talented youngsters take to professional courses in engineering, medicine, accountancy and management, Aishwarya’s focused vision directed her to take up B.A. (Music). She has now decided to do her Masters and then aspires to move on to the doctoral level in music, taking in her stride the positives and the negatives the field will inevitably throw up.

Aishwarya’s paternal grandfather was a diehard fan of Carnatic music and her doctor father Shankar learnt to play the veena from ‘Calcutta’ Anantharama Bhagavatar – popularly known as Ambi Sir – of the Dikshitar tradition. Aishwarya’s mother has also learnt Carnatic music. In such an environment, Aishwarya started her musical training at the age of four with Indira Ranganathan, a respected teacher in Kolkata of vocal music and veena. This continued for fourteen years and when Aishwarya’s family shifted to Chennai in 2008, she came under the tutelage of vidushi Suguna Varadachari, a major guru in Chennai. Her repertoire as on date is more than 450 ‘uruppadi-s’ or items – a major achievement for one so young. She is a recipient of the Government of India scholarship for advanced music training.

When her father was pursuing FRCA in England, Aishwarya gave a few public concerts there when she was only ten years old. Back in Kolkata, she continued to give concerts, including in the two prestigious sabha-s – South India Club and Rasika Ranjani Sabha. After shifting base to Chennai, she has performed in numerous cities and towns in India, including a concert at the Shanmukhananda Sangettha Sabha in Mumbai.

While in Kolkata, she learnt the structure of pallavi-s from a family friend, T. Chandramouli, who also taught her a few ‘nadai’ pallavi-s. Suguna Varadachari has also taught her many pallavi-s. However, inclusion of an RTP in the present day concert format of less than two hours is quite difficult.

Some notable features of Aishwarya’s music are a mellifinous voice, purity of pathantara, clarity and diction, and excellent sruti and laya alignment. Good manodharma and excellent use of ‘ghana’ and ‘naya’ (‘vallinam’ and ‘mellinam’) ingredients are additional attributes.

Along with vocal music, Aishwarya also learnt Bharatanatyam for fourteen years, but focused as she is on music, she has placed dance on the backburner.

We are certain to hear much more about this talented youngster in the days to come.