In his lecdem, Professor S.R. Janakiraman spoke on the ragas Narayanagoula and Kannadagoula. SRJ Mama as he is popularly known, started the lecdem by singing an invocation on Tyagaraja by the composer’s sishya.  After rendering another prayer dedicated to Muthuswami Dikshitar by Dr V Raghavan, SRJ wasted no time and delved right into the topic. Narayanagoula, he said, had not been mentioned by the Sangita Ratnakara of Sarangadeva or Venkatamakhin’s Chaturdandi Prakashika and is also not on of Annamacharya’s 108 ragas engraved on copperplates found in Tirupati. However it has been mentioned by Subbarama Dikshitar’s Sangeeta Sampradaya Pradarshini. Subbarama Dikshitar gives the lakshanas and lakshana slokas of the raga. Then he gives his own concise description of the raga. Mama then demonstrated the raga’s arohanam and avarohanam.  Surprisingly, it did not start with shadjam but with rishabham. SRJ said that it was not always necessary for the arohanam to start with shadjam. He also said that Veena Kuppaiyer’s Narayanagoula varnam which he demonstrated earlier had all the admissible prayogas of the raga and was like an encyclopedia on Narayanagoula. 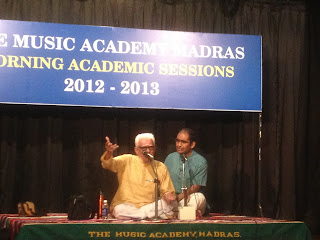 After this introduction, Mama and his disciple Prasanna performed the Narayanagoula varnam in Ata talam. After that, Mama sang tanam in the tune of the varnam while Prasanna sang the original composition.  It was truly splendid.  He also mentioned the etymology behind the word tana: tanyati iti tana (allows elaboration). SRJ then sang Tyagaraja’s Kadale vadu in Narayanagoula, after a quick introduction.  He said that the song hovered around Ri, Ma, Dha, and Ni.  Next was Dikshitar’s Sree Ramam.  Here Mama made a very interesting statement.  He said that if Thyagaraja caught the raga, Dikshitar taught it.  In the Sangeeta Sampradaya Pradarshini, Subbarama Dikshitar gives a Kaivara Prabandham in Narayanagoula.

Now Mama moved on to Kannadagoula.  He began by singing an alapana in swaras.  He also said that this raga should not be confused with Karnataka Devagandhari or Abheri.  He and Prasanna then demonstrated Sogasu juda tarama.  He sang it in the Rupaka tala that has only one laghu and drutam.  Later Ravikiran brought up the point that some songs do not sound correct if they are sung in this type of Rupaka tala and vice versa.  Then came the Nilotpalamba kriti of Dikshitar.  After this fantastic composition, SRJ mama concluded the lecdem.

Stalwarts like SRJ have so many dimensions (Classical languages, Literature, History, Linguistics, Music) to them, it is hard to believe so much knowledge exists in just one single person.  I feel this was the best lecdem so far and was made even better and lighter with Mama’s hilarious jokes and comments.  The lecdem was thoroughly entertaining, thought provoking and educational.