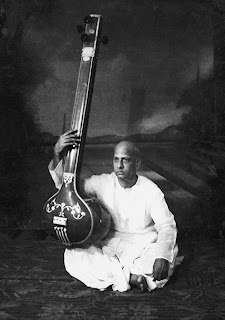 Dr. Sripada Pinakapani has been a Sruti favourite for almost all the time we have been in existence, starting with an extensive tribute to his musical prowess and scholarship we paid in 1983, the year he was awarded the Sangita Kalanidhi title. Though he did not achieve a doctorate in musicology, he was rightly called Dr. Pinakapani for his medical qualifications that made him Chief Surgeon at a government hospital.

It was however a frequent misapprehension that Pinakapani had earned the distinction as a musicologist, so profound was his knowledge of his art. His honorific and his reputation as a treasure house of musical learning tended to work to his disadvantage as organisers of music concerts and festivals could not picture him as a performing musician. Even the Music Academy made him only a last-minute offer of a “season” concert opportunity the year he was designated Sangita Kalanidhi.

Pinakapani, whose disciples included topnotch performers like Voleti Venkateswarlu, Nookala Chinna Sathyanarayana, Nedunuri Krishnamurthy, Srirangam Gopalaratnam and Malladi Suribabu and his renowned sons the Malladi Brothers, will go down in history as the man single-handedly responsible for introducing the authentic Ariyakudi (or “Tanjavur”) style of Carnatic music to Andhra Pradesh, which before his time, offered a different brand of vocalisation, perhaps not as rigorously orthodox. Internalising the nuances and subtleties of the doyens of the golden era of Carnatic music, he evolved his own Pani bani.

Pinakapani was reputed to have understood the different styles of the Trinity and, with devotion, intellect and effort, brought out the quintessence of their compositions in his pursuit of the classical Carnatic music tradition. A selfless teacher, he came to be known in his own lifetime as a Gana Rishi.

Pinakapani was born on 3 August 1913 in the village of Priyagraharam in Srikakulam district of Andhra Pradesh. His father Sripada Kameswara Rao was a junior professor of education at the Government Training College in Rajahmundry, and involved in theatre of which, in those days, music was a vital part.

Pinakapani sat in his sister’s music class with B.S Lakshmana Rao, who taught drama music in the classical idiom. Starting his own lessons in 1924, Pani completed his music training under Lakshmana Rao by the time he passed out of high school in Rajahmundry in 1929.

Saraswathi Gana Sabha in Kakinada run by a zamindar (with some financial support from other landlord patrons) held a 10-day music festival every year. Attending concerts there from 1928 onwards, Pinakapani was exposed to the music of Ariyakudi Ramanuja Iyengar, Kanchipuram Naina Pillai, Papa Venkataramiah, Kumbakonam Rajamanickam Pillai and Tiruchi Govindasamy Pillai.

Pani was particularly impressed by Govindaswamy Pillai, Ariyakudi, Naina Pillai and the khanjira-playing of Palani Subramania Pillai. He became pretty good at imitating Ariyakudi’s and Govindaswamy Pillai's music. Finding that the many kritis he had already learnt sounded different from the way Ariyakudi and other outstanding musicians sang them, Pinakapani realised he was now imbibing great music from the Tamil speaking areas of the Madras Presidency. He was barely 16 when he decided to acquire that particular style so that he could establish it in Andhra.

The gramophone records of the period often featured padams and javalis rendered by devadasis. Learning these songs by heart, Pinakapani also listened to the Hindustani music of Indubala, Vyas, Bal Gandharva and others on gramophone records and repeated it all flawlessly. He also absorbed the theatrical music of Andhra through his extensive exposure to the stage performances of the day in his father’s company.

Pinakapani continued to assimilate the elements of the “Tanjavur style”. He wrote down the sangatis he heard in performances or recordings. “For me, there is no one I can mention along with Ariyakudi,” he once said, “he excelled in every aspect: raga alapana, kriti, niraval, swara kalpana, gamakas, anuswaras.” He added, “I took the good points of every musician I heard and incorporated the aspects I liked in my music.”

Thanks to the initiative of his first teacher, Pinakapani soon enrolled as a very young student with violin maestro Dwaram Venkatswamy Naidu.

After completing the Intermediate course in Kakinada, Pinakapani spent the summer vacation of 1932 in Vizianagaram. Pinakapani stayed in a small room in Dwaram's house and absorbed the guru’s lessons on raga alapana to the many students gathered there.

In 1930, Pinakapani persuaded his Rameswaram-bound parents to leave him at Madras so that he could listen to the December season concerts. Staying at an aunt’s home, the boy listened to Ariyakudi, Flute Swaminatha Pillai and the veena music of the Karaikudi brothers among others at the Academy.

Musiri’s improvisation for Enta veduko, the Saraswati Manohari kriti, was the first time Pani heard niraval. Very soon, he replicated the Musiri niraval for the benefit of a senior friend, Dokka Sriramamurthy, when they sang together for his aunt. “When we began singing Inta paraka, Anai-Ayya’s kriti in Nadanamakriya, Sriramamurthy suggested we do niraval for it. I had the picture of Musiri’s niraval in my mind and applied the same approach when filling in at Kanna talli.”

From Musiri’s singing, Pinakapani learnt to sing kritis in slow speeds and from Chembai Vaidyanatha Bhagavatar, he learnt how to manage the eduppu or take off in a 4-kalai pallavi.
A rare opportunity to listen to Dhanammal’s Friday evening concert at Egmore was to have a profound influence on Pani’s music.

“Ariyakudi’s swara kalpana resembles varnams,” young Pani once told Dwaram, "because of his heavy voice, it seemed that there was much raga bhava”. When he proceeded to demonstrate that with a sample of swara-s, Dwaram predicted that he would “go far”.

Pinakapani joined the medical college at Visakhapatnam. A hostelmate – who taught him – and he practised music at 4 am everyday in the hostel verandah and on the beach. Pinakapani graduated in 1939. At his first first ‘big sabha’ performance, courtesy a lecturer in his college, the listeners included violin maestro Mysore Chowdiah, who was very impressed.

Invited by Chowdiah, Pinakapani went to Mysore, and stayed with him as a houseguest, practising and learning music. Chowdiah regularly accompanied him on the violin as he sang. A Salem Krishna Iyengar version of Inta saukhyamani in Kapi that Pani sang became Chowdiah’s favourite, because it was different from the Tanjavur style.

Pinakapani married one of two girls whom their parents had brought to sing before Chowdiah. They were Telugus who had settled down in Madras. The marriage took place in 1940.

Graduating at the top of his class, Pinakapani was the only one of his batch to acquire an MD degree. That was in 1945.

When he, along with B. Ramamurti, later an eminent neurosurgeon, was not confirmed in the post of Temporary Assistant Surgeon after four years of service (as they were “brahmin”), Pinakapani resigned, and moved to Rajahmundry, where he stayed for two years. There, Nedunuri Krishnamurthy began learning music from him. Earlier, in 1948, Nookala Chinna Sathyanarayana had become his first music student.

Back at the Vizag Medical College as Permanent Assistant Surgeon in 1951, Pinakapani was promoted as Civil Surgeon in 1954. Transferred to Kurnool in 1957, he retired there in 1968, after 17 years of service.

Pani, who continued to perform and teach music all through his medical career and afterwards, did not have many opportunities to perform in Chennai, where, according to him, “the sabha secretaries chose to view me only as a musicologist.”

Pinakapani produced numerous books to help improve the learning process. He composed six varnams on his own and tuned 108 keertanas of Annamacharya in a wide range of ragas.

Apart from Sangita Kalanidhi, Pinakapani received the title of Sangeeta Kalasikhamani from the Indian Fine Arts Society of Madras, the award of the central Sangeet Natak Akademi, and the Padma Bhushan. He was appointed as the asthana vidwan of the Tirumala-Tirupati Devasthanams.

Dr. Sripada Pinakapani lived at Kurnool until his death at age 99. Even though his health forced him to stay in bed for many years, he never stopped singing or discussing music. The Pani bani lives on in the music of his devoted sishyas.
Posted by Sruti Magazine at Monday, July 22, 2013