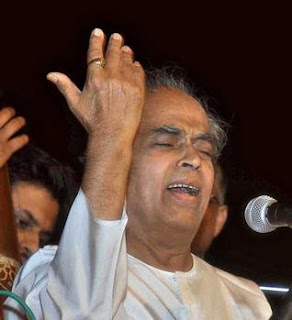 When our landline rings endlessly we know it’s a long distance call. Today morning when it rang while we were breakfasting, we knew it was my mother-in-law from Dharwad. Her calls generally come early morning.

Madhav Gudi has passed away. Check it out on DD Chandan… I’m planning to go to the funeral, she said.

My ma-in-law is 78 and lives all alone in her bungalow-house which hosts namdharaks who visit her regularly. Swananda, the bungalow, is the resting place of Sharakka, her atya and our ajji, much revered as a saintly figure. We remonstrated with her not to visit the bereaved Gudi’s family considering her age, the heat and they being ‘khatta’ Brahmins, as my wife puts it. Brahmins are generally ‘khatta’ or sweet.

I first met Pt. Madhav Gudi, then in his mid-sixties, in his rented house in Ambarnath, where he had moved along with his family from Dharwad to shore up his career as a classical singer in the city of Mumbai. As I introduced myself and elaborated on my connection with Dharwad, Panditji’s eyes lit up, his smile became broader (You are our son-in-law, then, he said) and in came a cup of steaming tea, a plateful of pakoras and Parle G biscuits with the wrapper.

It’s a magic of small towns—everyone seems to know the other. As if it’s a big family. You’re either related or the other was your neighbour, or your aunt went to the same school or as in Dharwad where music binds all. You are either sishyas of the same guru or your grandfather was one who either tutored Bhimsen Joshi or reprimanded Mallikarjun Mansur for his doleful singing.

When the write-up on him appeared in one of Times of India’s suburban supplements, Panditji called me to say thanks in his Marathi-accented Hindi. We would chat often on phone and he would regularly invite me to his concerts, which were very few. I enjoyed his concerts and he reminded me of Pt. Bhimsen Joshi, in his mannerisms and his way of singing. Pt Madhav Gudi was the foremost sishya of Pt. Joshi and lived with him for over two decades. In fact, Pt. Gudi regularly visited Pt. Joshi’s residence in Pune to tutor the latter’s son, Srinivas, on the kirana gharana style of singing.

Name and fame evaded Pt. Gudi. He hardly received invitations for concerts from the big Mumbai organizers defeating his purpose of being close to the city. Undeterred his daughter, Gayatri, an up-and-coming classical singer took the matter in her hands and organized a concert at Mumbai’s Rang Bhavan. It was a disaster. For unaware of the exercise of organising a concert in a city like Mumbai which included inserting ads in the media, sending invitations to music critics, courting the photographers and so on, Gayatri had failed miserably. More, the concert was her individual effort and lacked the blessings of a sponsor–a must for events like this.

I was there to listen to Pt. Gudi’s soulful rendition of bhajans having heard them on a cassette—a present from him on our first meeting. I had never heard bhajans of such calibre; you could feel the words.

Most of his life Panditji lived in penury despite being the foremost sishya of an illustrious guru. Agreed, success doesn’t come to all, but can fate be so cruel. Maybe his bhajans were entreaties to the Lord to make life little better. Connoisseurs blamed his lack of popularity for being a clone. Those who had heard him, of whom there were not many, came to his concerts for the bhajans.

Two hours since the scheduled time for the concert to begin we had only ten persons in the audience which included Panditji’s family members and friends. Gayatri was disheartened, she almost cried. I consoled her assuring her, ‘The time will come.’ Gudi came on stage, apologised and left.

After staying at Ambarnath for nearly two years Gudi returned to Dharwad, dejected but hoping that one day his daughter, Gayatri and son, Prasanna would achieve the fame and name that always eluded him.

I don’t know if any recording of Pt. Gudi exists other than the AIR Music fest recordings. Despite being a veteran he performed for the festival. I still have the cassette of his bhajans which Gayatri had recorded but will have to find a player for the same.

(Reproduced with permission from the author).
Posted by Sruti Magazine at Friday, July 05, 2013