Fears that some of our senior musicians may go unrewarded as Sangita Kalanidhi by the Madras Music Academy have receded somewhat with the announcement of vidwan T.V. Gopalakrishnan’s elevation to that coveted honour this year. A versatile artist of many dimensions, TVG has been a youthful, energetic presence in the world of Carnatic music, sometimes beyond it, for some seven decades, now. As a mridanga vidwan, vocalist in more than one genre, composer, guru and proselytizer, the man from Tripunithura has been known to be a swashbuckler among the orthodox, a traditionalist amidst the pro-changers, reverent towards his gurus and questioning of taboos, all at once. His admirers and critics may be about equal in number, but no one who has followed Carnatic music closely for a long time will question his credentials. He has been consistently hard to ignore, and many of us who had given up the hope – after he crossed 80 – that he would follow in his guru Chembai’s footsteps, now rejoice in this richly deserved recognition. Knowing his articulation, we can expect him to bring flair to the conduct of the academic sessions at this year’s conference.

Musicians of the calibre of M.S. Anantharaman, T.H. Vinayakram, V.V. Subramaniam, Vyjayantimala Bali (though essentially a dancer, like Sangita Kalanidhi T. Balasaraswati), P.S. Narayanaswami, Suguna Purushothaman, R. Visweswaran, and Tanjavur Sankara Iyer are some other names that come to mind as artists deserving of high honours. While the Music Academy has decorated some of them as Sangita Kala Acharya, there may still be a case for a Kalanidhi or lifetime achievement award for a few of them. Synonymous with the ghatam, Vinayakram, would, in particular, seem to be a perfect candidate for the ultimate award.

It is no easy task to select one honouree every year from a large pool of contenders, we know, and this is no attempt to offer criticism or gratuitous advice to an institution that has been grappling with it and generally giving satisfaction to all but its most strident critics. We must, however, acknowledge the very real danger that among a vast variety of specialists, vocal and instrumental – lead and accompanying, wind, string and percussion – some outstanding vidwans can escape the radar altogether. Some, like M.D. Ramanathan, were ignored for far too long, while others like Rajarathnam Pillai and Ramnad Krishnan perhaps did not live long enough.

The truly great may care little for worldly success. We know from the extraordinary lives of the Van Goghs, Gauguins, Monets and Manets of the Western artistic world, that many geniuses went unsung and unhonoured in their lifetime, but we do not often hear of giants of Carnatic music who led impoverished lives of no reward, and whose greatness the world came to appreciate only after their death. There is a high probability that there were several such instances that went unrecorded, quite literally before the advent of the gramophone, and owing to our lack of rigour in documenting our history, though there may be stories galore floating around in the realm of legend.


The Music Academy, Madras has selected eminent and multifaceted  Carnatic musician T.V. Gopalakrishnan for the title of Sangita Kalanidhi, and to preside over its 88th annual conference to be held from 15th December 2014 to 1st January 2015. Vidwan T.V. Gopalakrishnan  will be conferred the Sangita Kalanidhi title at the Sadas on 1st January 2015. 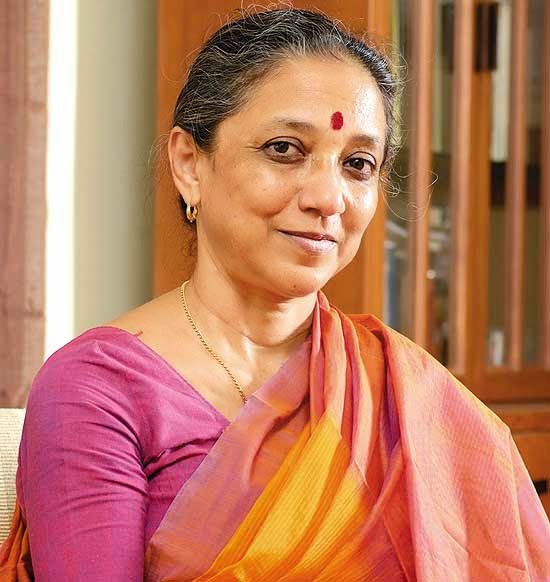 The Natya Kala Acharya Award will be presented to eminent Bharatanatyam exponent, choreographer, teacher and arts administrator  Leela Samson. She will be honoured at the inaugural function of the Dance Festival on 3rd January 2015.
Posted by Sruti Magazine at Monday, July 21, 2014 No comments:

Mridangam maestro and versatile vocalist TV Gopalakrishnan has been designated Sangita Kalanidhi by the Madras Music Academy. Born at Titupunithura, Kerala, 82 year-old Gopalakrishnan hails from a traditional family of musicians.

His father, T.G.Viswanatha Bhagavatar, was a court musician for the Cochin royal family and a professor of music at the S.K.V. College in Thrissur.

TVG started playing the mridangam at the age of four and had his arangetram at the Cochin palace at the age of six. A disciple of Chembai Vaidyanatha Bhagavatar, TVG has been a popular guru among both Carnatic musicians and others pursuing music of other genres. He has been a pioneering collaborator in several fusion efforts. His other honours include the Sangeet Natak Akademi and the Padma Bhushan awards. 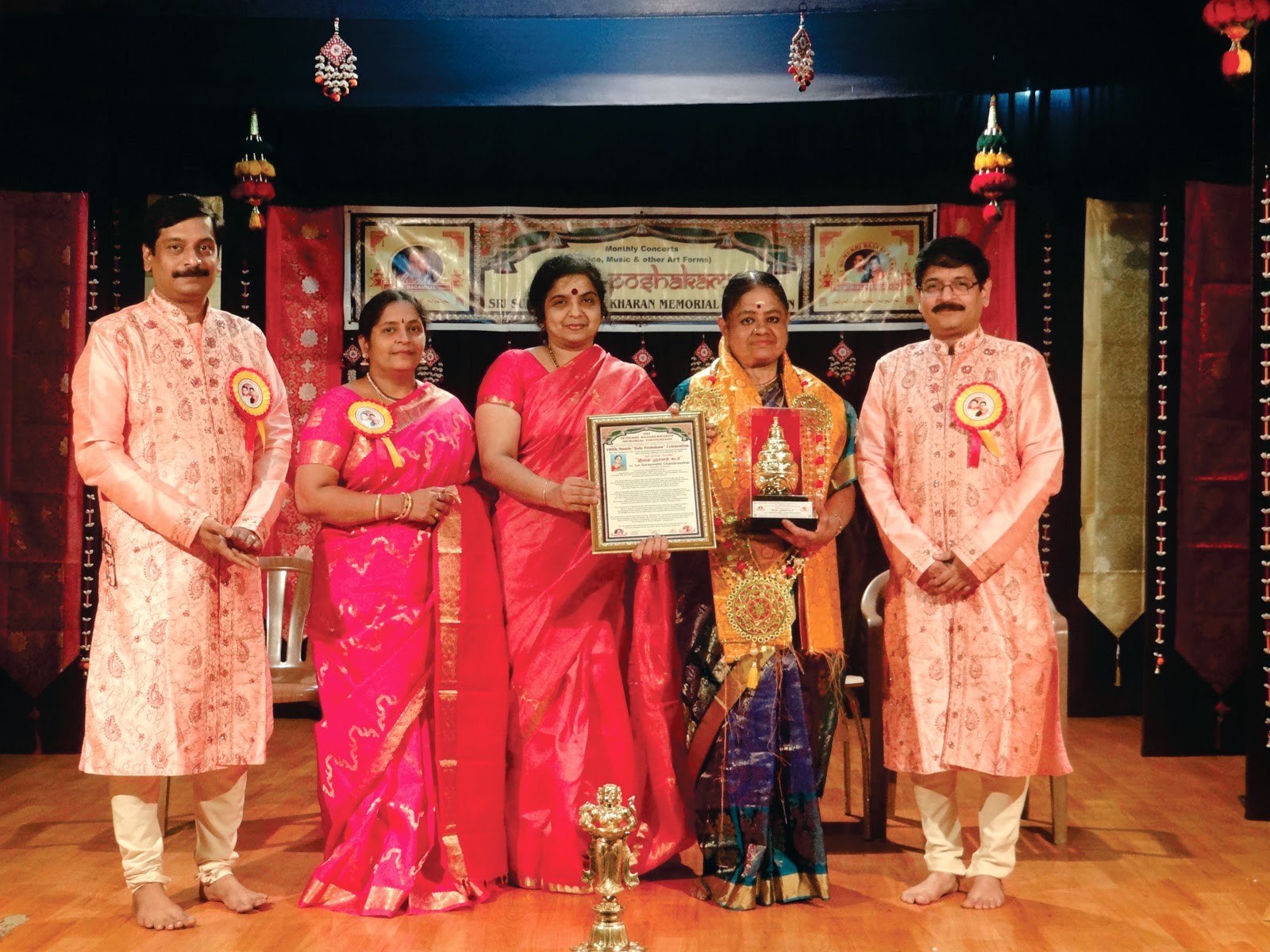 The 100th “Kala Poshakam” event of the Sri Sumukhi Rajasekharan Memorial Foundation was celebrated on 29 June at the Narada Gana Sabha hall in Chennai. The Mylapore Trio (Amarnath, Surendranath and Aparna) launched the monthly programmes called Kala Poshakam in February 2006. It was inaugurated by the late Leela Sekhar (Chairperson of IDA) and dance guru Anita Guha of Bharatanjali Trust. Kala Poshakam is today a free monthly platform to showcase any art form. 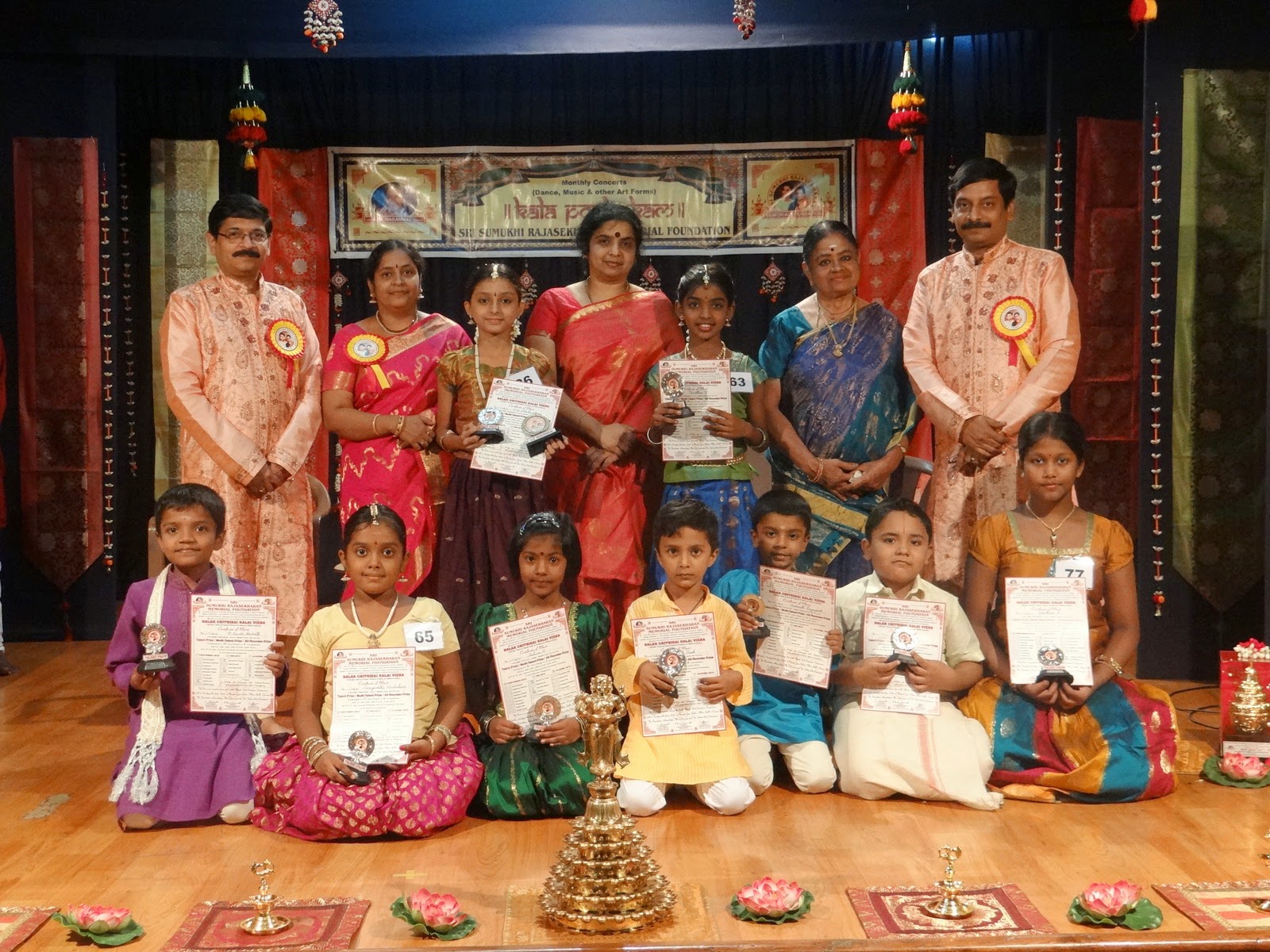 The grand 100th programme had a jam-packed audience. Chief guest Anita Guha recalled how she had been impressed by the Mylapore Trio’s Great Grand Golu and their multifacted activities in the field of art and culture, and had therefore conferred the title of ‘Satya Kala Poshaka Sundaram’ on the Mylapore Trio in 2005. She appreciated their earnest efforts in upholding and propagating cultural and traditional values among children through Sumukhi’s innovative cultural events, workshops, camps and golu.

As part of the celebrations, Saraswathi Chandrasekhar, was conferred the title “Isai Gnana Chudar” for her expertise in Carnatic music and Tamil Isai. About 150 participants of the “Balar Chithirai Kalai Vizha” competition also received their certificates, medals, and prizes. The winners presented a cultural programme which included Carnatic music, Bharatanatyam, and folk arts as well.
Posted by Sruti Magazine at Monday, July 07, 2014 No comments: