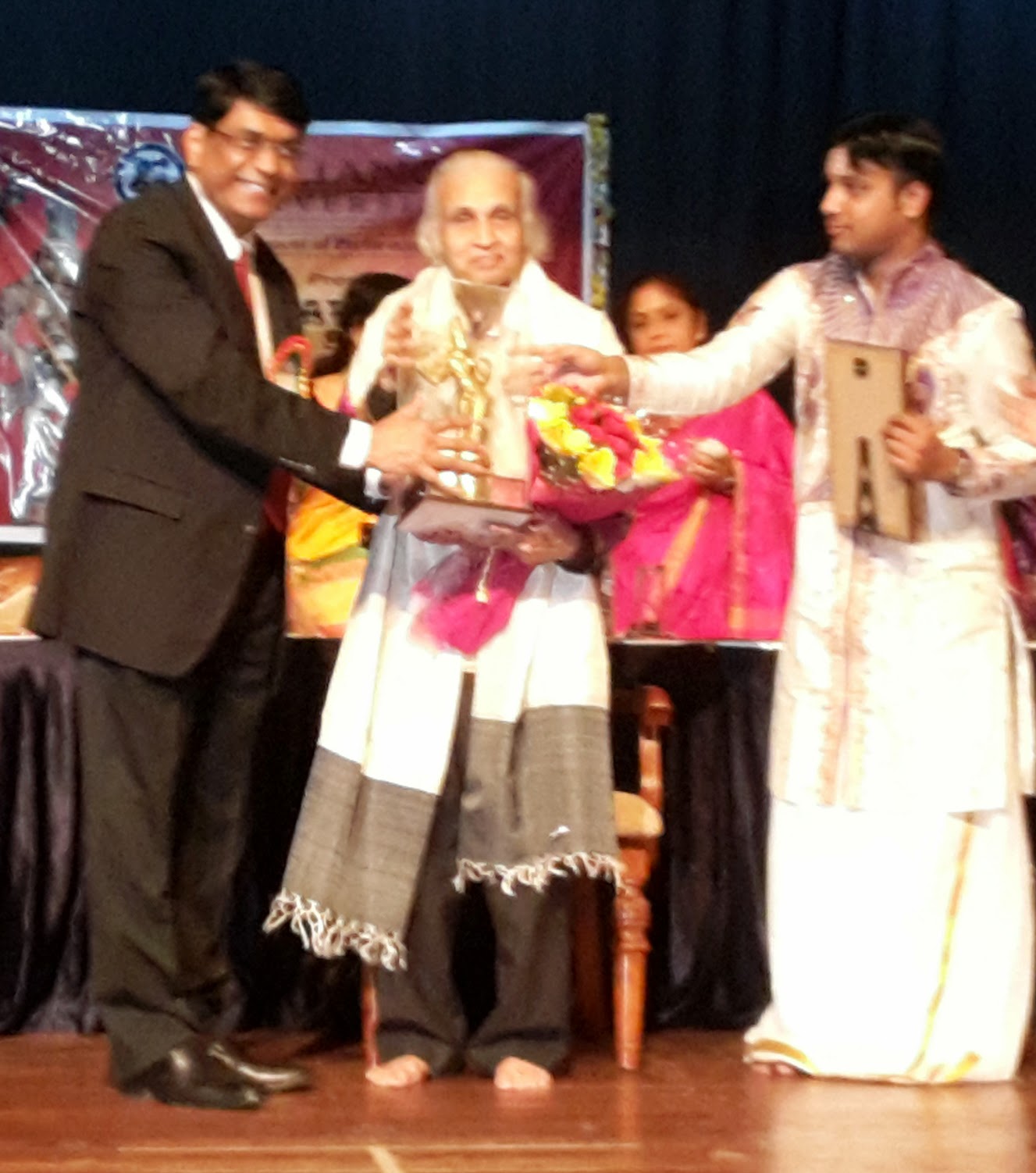 Nritya Vachaspati  Award for Dr. Sunil Kothari from Chancellor of Alliance University
on 28 April 2015 at  Bangalore on the occasion of  World Dance Day 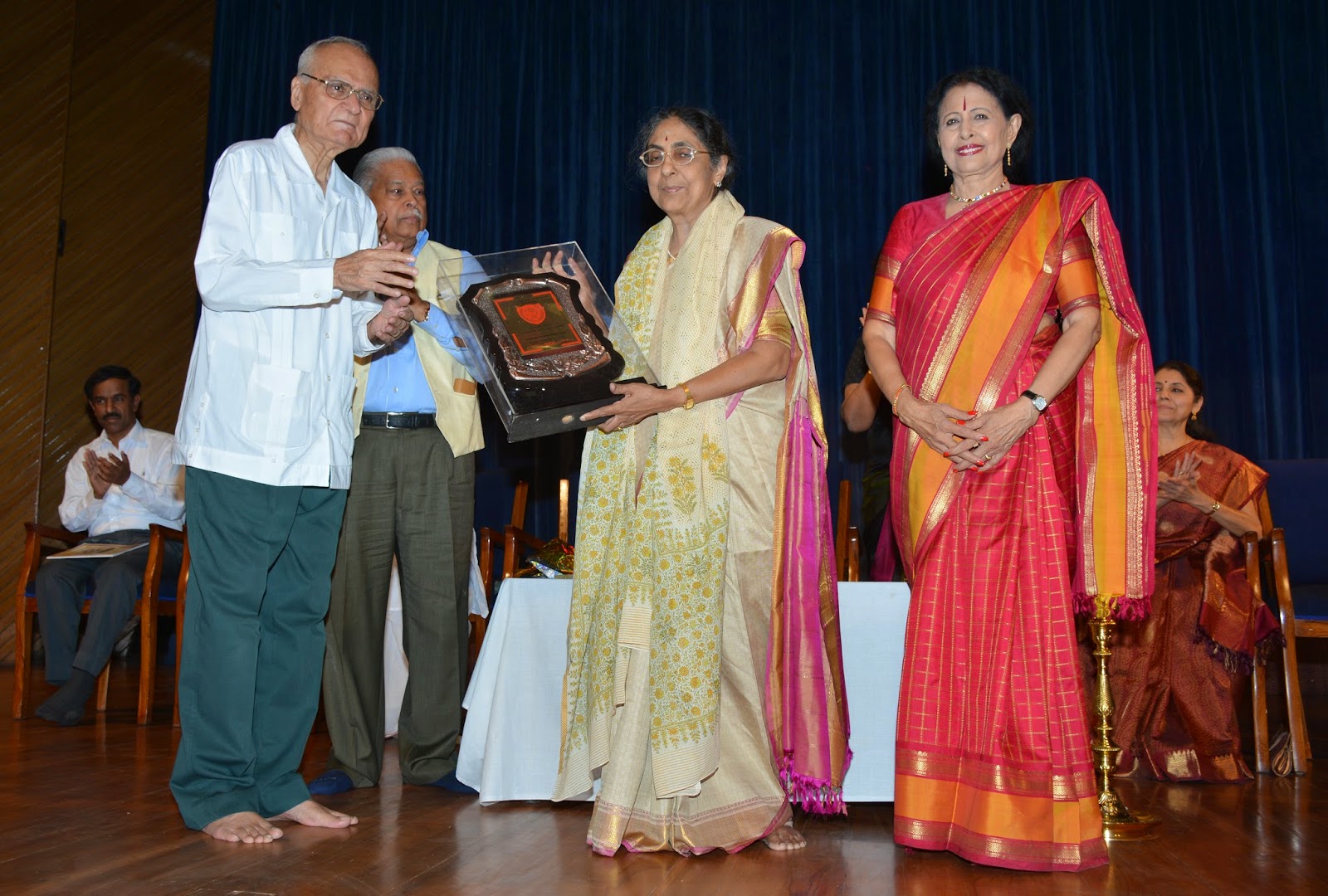 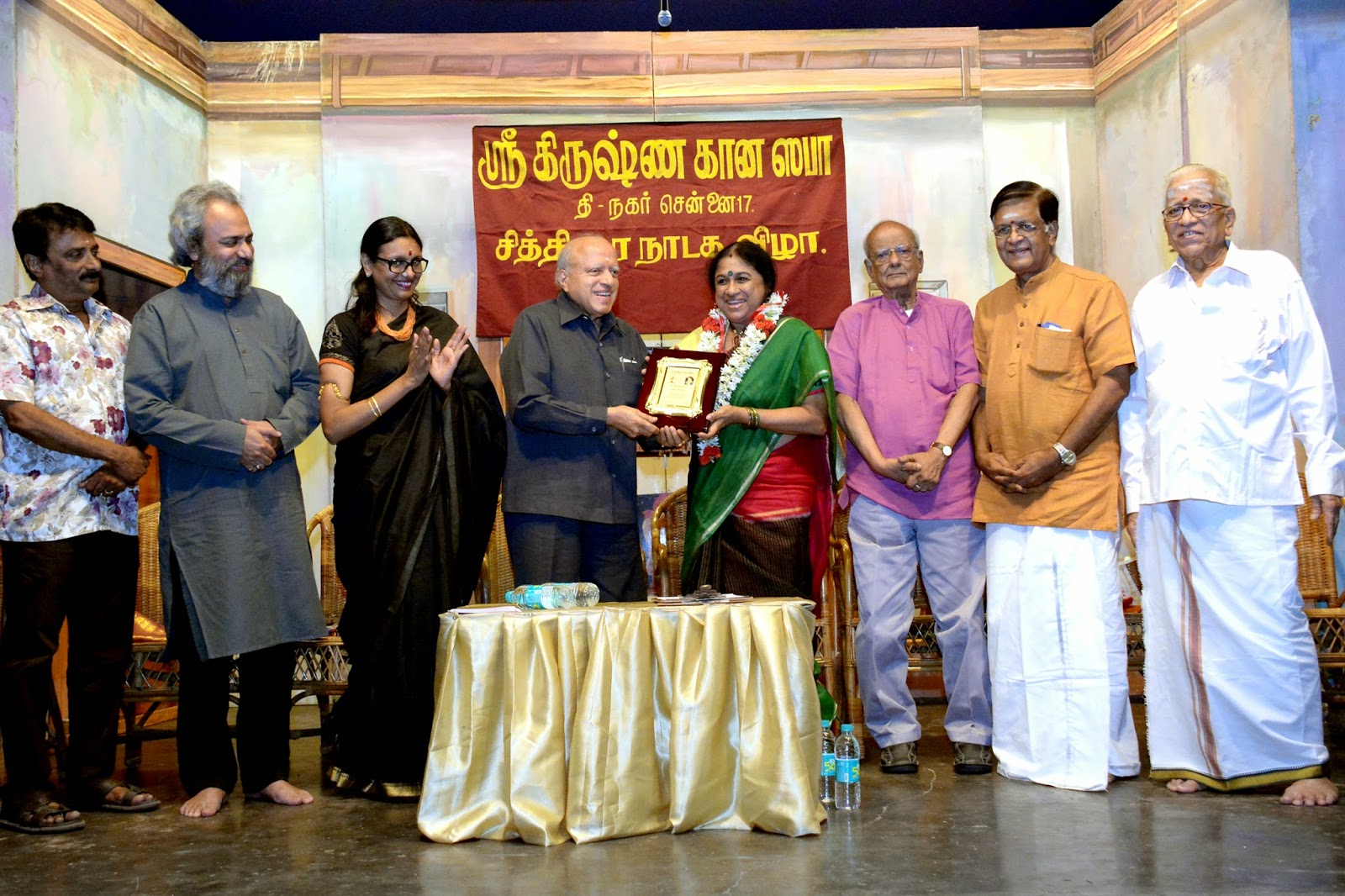 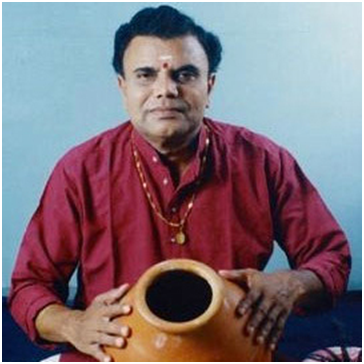 Eminent ghatam artiste, Sri E M Subramaniam, a quiet legend in every way, died of multiple organ failure this morning in a private hospital in Chennai. Having lost all his spinster siblings one by one earlier (he was unmarried as well), he had no blood relations. Gathered in mourning around his mortal remains today were an impressive line-up of his students at the Government Music College, Chennai, for some years.

Among the mourners was auto rickshaw driver Shankar who served EMS for close to 15 years--more as a son than a paid chauffeur. Heartwarmingly, Madurai Balasubramanian, a noble violinist, and a trustee of a voluntary trust, has taken up the duty of performing the last rites for Sri EMS. There were a handful of musicians visiting to pay their last respects to the percussionist, an amazingly power packed ghatam player for close to five decades. Nobody knew whom to console! As I went in for my turn, it struck me that the intricate, embellishing, entertaining laya contributions of this unpretentious artiste all these years that had been noticed by musicians, music lovers and connoisseurs had neither resulted in a reasonably comfortable life for him nor would their worth be hailed in perpetuity. May his soul rest in peace!
Posted by Sruti Magazine at Thursday, April 23, 2015 2 comments: 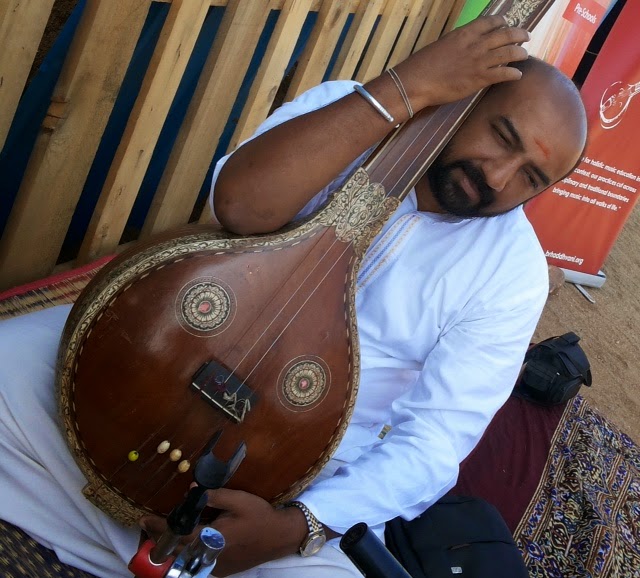 N. Sasidharan is a well known Bharatanatyam vocalist whose voice and presentation remind us of  of his guru K. J Yesudas. A recipient of titles including that of Isai Chemmal and the Best Vocalist award Sri from Krishna Gana Sabha, Sasidharan believes that singing for dance has enriched his musical experience. He speaks to Sruti about his extensive training under his guru and his experience of over two decades in the Bharatanatyam field.

Tell us about your early exposure to music.

Music was not new to my family. My mother was a good singer and she was trained by Kanchipuram Naina Pillai. On my father’s side too, we had trained musicians. My aunt was a knowledgeable musician. Though none of them sang professionally, music was a part and parcel of their lives. I had no intention of becoming a musician. In fact, I had dreams of joining the army! My mother however felt that I had talent in music and that I should become a musician.

My mother  Srimati N. Thirupurasundari was my first guru. After that, I was with Sri B.V Lakshmanan for about six years. I continued my training at the Chennai Music College. The turning point came when I met Dr. K. J. Yesudas. To this day, I continue my learning with him. I have also received training from Vidwan P. S . Narayanaswamy.

How has the experience of learning from Yesudas been?

Meeting Yesudas Sir was the biggest blessing in my life. When we went to his house for the first time as students from the Music College, I was awed by his gracious attitude. I sang for him and when I was leaving, he asked me to come whenever I was free to learn from him. I jumped at the chance and after my course, I came under his wing. It was true gurukulavasam. I would reach his house early morning, help with small household chores, listen to him practise and learn. When I was in a dilemma about taking music full time, my parents came to meet him. He said “That is not for me to decide. The decision has to come from Sasidharan. Only then will he understand the choice he is making”. He then said that if I planned to become a full time musician, I must increase my practice sessions. In a few days I made my decision and on January 14th 1987, my life charted a new course!

Having spent over 20 years in gurukulavasam,  you must have many fond memories.

Yes absolutely! There is no better way to learn music than to be full time with your guru. It is not just about learning compositions. When you are with a guru who is as learned and devoted to his art as he is, every moment becomes a learning experience. I travelled with him and accompanied him on the tambura, listened to him teach, heard his film music recordings and discussions about music. He used to often talk about life.’ Love, marriage and day to day problems are all part of life. They will come and go.’ He said the mind must be focussed on what we are doing without getting distracted He also encouraged me to watch good films and not waste time on those which would not contribute to cultivating good taste. He would often say, 'Great artistes have given their life to music and enriched it. We are just standing at the shore of this vast ocean. It is only by tapas through your music that you can achieve a small percentage of your aspirations.' These little pointers have influenced my outlook on life and my music.

How did Bharatanatyam enter your life?

Well, I might say with marriage - as I married a dancer (Gayathri Sasidharan)! Initially, I had no connection with the field. I used to go to Gayathri’s performances but was not singing for Bharatanatyam. I was working in the Padma Seshadri school as a music teacher. An opportunity to sing for the Dhananjayans came at that time through a colleague. I remember the first time I met them. I entered a Bharatanatyam class for the first time! He stopped the class and asked me to sing. He then asked me with a smile if I had come to sing for Bharatanatyam because I was interested or because I was cornered! I laughed and replied truthfully that it was neither and that I had come with an open mind with no expectations or experience in this line! On 12th December 1994, another chapter in my life began.

Did you get any specific training?

Yes, both Master and Akka trained me in the nuances of singing for natyam. Both of them were extremely musical and taught me how to tailor my music to sing for Bharatanataym. I learnt how to watch the dancer and use music to create the mood needed. They spent a lot of time teaching me. We never recorded anything then. We notated everything. I had to focus and learn on the spot. My first performance was a recording. I remember the first tillana I sang; I had to repeat the pallavi 24 times! I was so tense but Shanta Akka encouraged and guided me. I can never forget the boost they gave me. My life as a Bharatanatyam vocalist began at Bharatakalanjali.

Did you continue teaching at Padma Seshadri?

No. I had to leave the job as rehearsals and performances took my time. Mrs YGP too was so magnanimous to let me resign with her blessings. She said that if at any time I wanted to go back, the doors would be open for me. I was touched. I feel that all these artistes and rasikas put art before their personal needs.

Do you sing for other Bharatanatyam artistes?

Yes. After many years of training at Bharata Kalanjali, I started singing for others.

Any regrets at not being a concert artiste?

Initially, I did feel bad that I could not pursue music as a mainstream vocalist. However, the high calibre of artistes I met and the challenges of singing for dance drew me into this field. I gradually found that my music was taking on another dimension because of singing for dance. Firstly, my attention to sahitya bhava improved tremendously. Secondly, finding ways to use the raga to highlight emotion opened up new ways of looking at  raga delineation. As a musician, I have to be creative to decide whether a niraval, tanam or raga would be suitable to the dancer's sanchari bhava.

Can you give an example?

Once, Dhananjayan sir was performing the Tyagaraja kriti Nagumomu as part of a production. He asked me to sing and I sang in the same kala pramanam as I would in a music concert . He let me finish and then asked me to watch him do abhinaya to my music. There was a total mismatch! I then realized I was singing without paying attention to the sahitya and pace required for the dancer. For a Bharatanatyam artiste, the whole art form revolves around the sahitya. If I paid attention only to the raga bhava and not the sahitya, the music and dance would be on separate tracks! From that day on, I always ensured I knew the meaning of what I was singing.

Some musicians believe that sahitya bhava is secondary to raga bhava. Please comment.

As far as Bharatanatyam is concerned, I feel both are equal. One does not need to reduce the classical quality of the music to achieve emotion. We are just finding more ways to use the raga to create the desired effect. In that sense, the scope of the raga only increases.

Any advice for aspiring vocalists?

We have to first remember that the platform is shared by two art forms and both have to move forward together to create a shared space. A  Bharatanatyam performance is only successful if the music supports the dance. As musicians, there should be no ego. We have to sing according to the way the dance is visualized. A key requirement to be a Bharatanatyam vocalist is adaptability and an open mind.
Posted by Sruti Magazine at Friday, April 17, 2015 No comments: 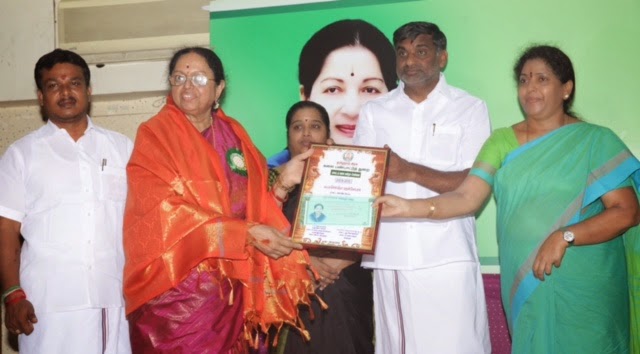 Chennai based Hindustani vocalist Soumya Madangopal received the 'Kalai Mudu Mani' Award from the Department of Arts and Culture, Government of Tamil Nadu, on 8 April 2015. The award was presented by  Minister for Textiles Gokula Indra.at the Collectors Office in Egmore, Chennai.

The award is in recognition  of Soumya's work in the field of voice culture techniques and their application. She  has trained several music students including playback singers.

Soumya hails from a music family. Her father the late R. Ranganathan was a committee member of the Madras Music Academy, and served as Secretary for some decades. Her mother  Rajeswari Ranganathan is a graded Carnatic vocalist in All India Radio, and her brother R. Visweswaran was adept in   Carnatic, Hindustani and Western music. Soumya is the niece of GNB, and granddaughter of  Gudalur V. Narayanswami Iyer, who served as Principal of Hindu High School, Triplicane,  as Secretary of Parthasarathy Swami Sabha, and was a member of the Experts Committee of the Madras Music Academy.
Posted by Sruti Magazine at Sunday, April 12, 2015 1 comment:

TS Sankaran is no more 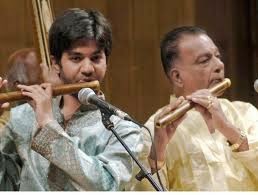 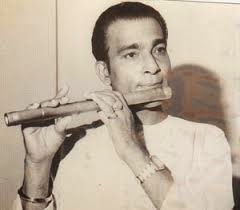 Veteran flute vidwan TS Sankaran, a disciple of TR Mahalingam, passed away at Chennai on
9th April. He was 85.

Sankaran was known for the subtle nuances of his music and delicate blowing technique. He was also a kind and generous man, with a strong patriotic streak in him.

Young flautist JA Jayanth, his grandson and prime disciple, has been hailed as one of the bright prospects in the Carnatic music concert circuit.