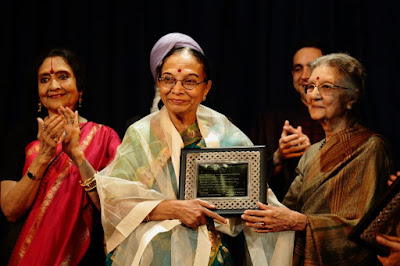 The packed hall at the Alliance Francaise, Bengaluru, had a quiet dignity about it as the sixth annual ‘Attendance’ award function (2015) kicked off to an auspicious start. A brainchild of the Khokar Dance Foundation, the event was conducted in collaboration with Alliance Francaise de Bangalore and Bangalore School of Music.

The highlight of the function was the announcement by the editor and publisher of  Attendance  - Ashish Khokar - that the first disqualification for the awards was canvassing for them! A short pada puja was performed by  children to honour the dignitaries. Elegant white shawls  instead of the customary shiny ones, and the variety of events showcased  were a welcome change from the long drawn out speeches in award ceremonies. The cherry on the cake was that the awardees under the age of 50 are given an internship with a dance company abroad and those above 50 have their work archived professionally. It was an honour for the recipients to receive their award from veteran artist Vyjayanthimala Bali.

The awardees  presented a glimpse of their work. The Upadhaye sisters showcased their versatile dancers with excerpts from the production Matsyaanga. Radha Shridhar’s disciple Aishwarya Nityananda presented her guru’s composition on Lord Siva with energy and perfection. 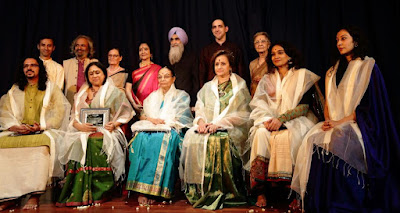 Padmini Ravi, who dons many hats, spoke about her journey which took her away from dance but finally brought her back with renewed vigour. Sheejith Krishna and Gowri Ramnarayan, who made it from Chennai braving the floods,  spoke about the purpose of art in their lives.

It was an inspiring evening which renewed faith in the integrity and importance of awards as indications of milestones in an artist’s life.

Posted by Sruti Magazine at Monday, December 28, 2015 No comments:

Every now and then, ‘concerned’ artistes and rasikas echo a lament that Carnatic music is suffering from declining popularity. I think this is a Chennai centric view. In the past two decades, Carnatic music has actually grown new wings, geographically speaking. Thanks to media, people are familiar with the US story and the rampant expansion to countries as unthinkable as New Zealand, Austria, China, Brazil and everything that is in between. This is a far cry from the isolated concert tours of MS or Lalgudi Jayaraman in the 1960s and 70s. The prestige associated with performing in Cleveland is no less than an opportunity at the Music Academy.

The more impressive, but less publicized development is within India itself. Tamil Nadu now hosts festivals in Erode, Salem, Ranipet, Kumbakonam, Devakottai, Chidambaram and Kanchipuram besides the matured centres like Madurai, Coimbatore and Trichy. Kerala, Karnataka and Andhra Pradesh have their own high profile events in smaller towns and cities and there are activities through the year. Besides  icons like Shanmukhananda in Mumbai, many organizations are hosting events in Kolkata, Pune, Delhi and even Bhubaneswar and Guwahati. These are very important developments in the spread of our music. Some of these festivals have gone on to achieve enough financial muscle to fly in artistes from Chennai. It is also not a secret that audiences pay their due gate fees and organizers do not just depend on sponsorships. That augurs well for a audience supported eco-system, which is how the world of music is commercially run.

The geographical growth also helps in development of regional artistes and accompanists and raises the bar for them. And in grooming enlightened listeners of the future. There are many stories of outstanding concerts outside Chennai by stalwarts in the 50s and 60s, including the famous one by Alathur Brothers and Palghat Mani Iyer at Trichy Nandrudayar temple in 1956 and many of GNB, Ariyakudi and TN Rajarathnam. These became gold standards for the succeeding generations of both artistes and listeners. We must go beyond the Mylapore enclave to appreciate how our music is extending itself with salubrious effects.
Posted by Sruti Magazine at Saturday, December 26, 2015 No comments: 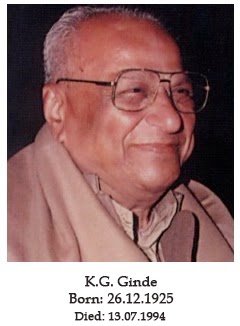 Posted by Sruti Magazine at Saturday, December 26, 2015 No comments: 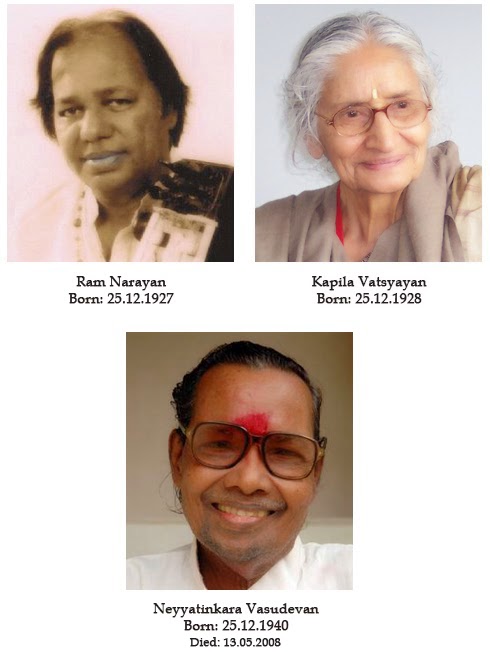 Posted by Sruti Magazine at Friday, December 25, 2015 No comments: 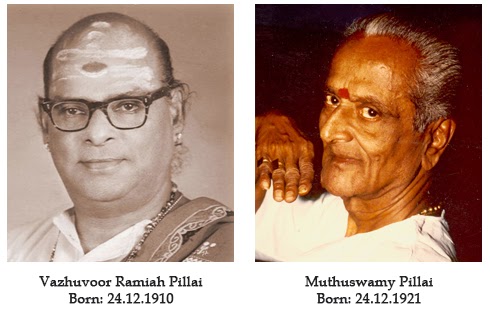 Posted by Sruti Magazine at Thursday, December 24, 2015 No comments: 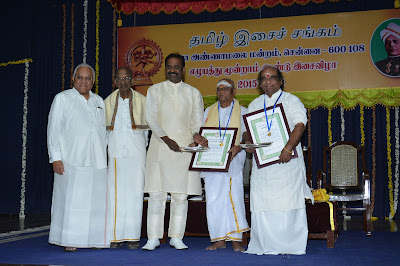 The 73rd Annual Tamil Isai Festival was celeberated today at Raja Annamalai Hall, Chennai. Thiru A K Palanivel  was awarded the Isaiperaringar, along with a Medallion and cash award.

Thiru S. Muthukumarasamy Desigar was awarded Pann Isaiperaringar, along with a Medallion and cash award.

Kavipperarasu Vairamuthu was the Chief Guest and presided over the function.

Kavipperarasu Vairamuthu  in his inaugural address said that Annamalai Chettiar started his valuable service 73 years ago for protecting Tamil Isai and he appreciated Dr . A. C. Muthiah and his family members for maintaining and leading in a wonderful way.

Dr A C Muthiah, Hony, Secretary gave the Vote of Thanks.
Posted by Sruti Magazine at Tuesday, December 22, 2015 No comments: 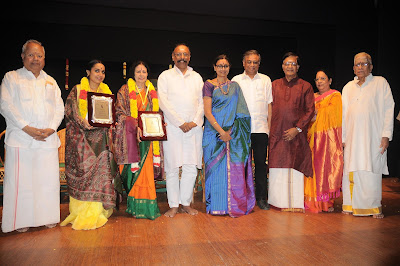 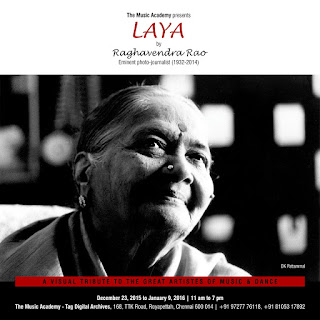 The Music Academy presents ‘Laya’ by eminent photojournalist Raghavendra Rao, an exhibition of photographs of some of the renowned artistes of our time. The exhibition is a two-pronged tribute: to the great practitioners of music and dance, and to the culturally vibrant, resilient city of Chennai, in which the iconic photographer spent a large part of his life.

Born in 1932, Raghavendra Rao was a raconteur who strung his narrative with poignant, telling, often dramatic visuals. All through his career as a photojournalist in Indian Express, India Today, and, finally, The Hindu Business Line, where he guided a team of young photographers, Raoji, as he was known to friends and colleagues, took pictures that reflected the social changes of the time, the cultural ethos, the political climate. No photograph was merely a photograph; it was a story of the times. Rao encouraged curiosity, defied convention, and was a mentor and teacher to many.

‘Laya’ is a collection of Rao’s pictures of the great masters of dance and music who defined and made up the art scene of the city. As he wrote in 2005, every picture to him was a dynamic story, an encounter with an extraordinary person, an experience to cherish. His pictures of D.K. Pattamal, Malavika Sarukkai and Dwaram Venkataswamy Naidu, among others, are moving visuals, richly evocative and profoundly expressive. At a time when gadgetry and technology were neither ubiquitous nor inexpensive, Rao captured fragments of life and society using his greatest tools – his eye and his open heart, and his most cherished instrument, light.

One year after he passed away, ‘Laya’ seeks to serve as a tribute to art and as a remembrance of the artist, philosopher and thinker that Raghavendra Rao was. The photographs shall be on display between 23 December  and 9 January at the Music Academy. Sangita Kalanidhi designate Sanjay Subrahmanyam inaugurates the exhibition at 10.30am on 23 December 2015. 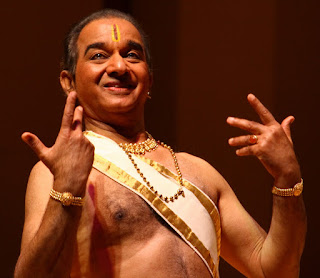 Melappadam is a musical ensemble in Kathakali. In Kerala, the  instrumental tradition of ‘melam’ refers to percussion instruments such as chenda, maddalam, edakka, timila, elatalam, chengala, and konbu which are  played on auspicious occasions, especially in temple festivals. The padam in Carnatic music generally refers to the slow paced singing of songs and compositions. In Kathakali, the dialogue between characters is highly evolved and poems are sung in bhava laden ragas. In the golden era the style of singing was called Sopanam. Now the Kathakali sangeetam has taken a different route similar to Carnatic music, leaving behind the Sopana style to ashtapadi padam singing in Krishna temples in Kerala.

The present generation of Kathakali rasikas may not be very familiar with ‘melappadam’ which is loosely translated as “musical ensemble" in English,  because of its conspicuous absence in a Kathakali presentation. Moreover,  not many young Kathakali bhagavatars are adept in this unique sampradaya  or feature in a Kathakali performance.  The time factor in today’s Kathakali presentation on a proscenium stage which could last for a maximum of three hours cannot accommodate a melappadam session which itself consumes an hour at least.

Melappadam is a musical interlude which immediately follows the vibrant nritta prelude known as ‘purappaadu’ which gives the lead line of an ashtapadi (from Jayadeva’s Geeta Govindam) at the end and usually Manjutara kunjatala keli sadane in Todi raga and Chempa tala (10 matras  count) – equivalent to the Jhampa tala, but is differently executed.

In the olden days, Kathakali bhagavatars practised and believed in lakshya  rather than lakshana sangeetam, and hence did not concentrate much on swara suddham and sruti suddham.  In the recent past, with the establishment of Kerala Kalamandalam in 1930 and the revival of Kathakali, the Kathakali sangeetam also got a filip and classically trained musicians like Kalamandalam Neelakandan Nambeesan and Kadathanadu Govindan Nambeesan infused a new trend in melappadam in combination with stalwarts like Kalamandalam Krishnankutty Poduval and Appukkuty Poduval. We do not know exactly when this feature was introduced in the Kathakali tradition, but this is a unique concept, which gave the bhagavatars a chance to explore and exhibit their virtuosity as a sangeetagna (experts in geetam, vadyam and natyam).

Melappadam is one of the most difficult ensembles with loud instruments like the chenda and maddalam, the elatalam and chengala as accompaniments to the singing.  Sometimes the 'double melam’ – with two  chendas and two maddalams) would provide an exciting “melakkozhuppu” (a full bench sound regalia).  Probably this could be compared to the ragam-tanam-pallavi and the tani avartanam in a music kutcheri or nagaswara concert.

Usually, the kalapramanam is set to begin in eight kala chauka – in the Chempa tala cycle of 10 matras x 8 = 80 matras, and then stage by stage it counts down to 40, 20,10, 5, and then accelerates to a high crescendo in chaturasra nadai – a climax you cannot imagine, but can only experience.

In a bid to revive the Melappadam tradition, recently the Sadanam Kathakali Academy headed by Dr. Sadanam Harikumar took the initiative to create a new Melappadam with the text  Mamiyam chalita vilokya from the ashtapadi and set in Atantha talam (same as Ata tala). This Melappadam was presented at the Sadanam Auditorium on 26th July in connection with the celebrations of the late Keezhpadam Kumaran Nair’s 100th birth anniversary as a tribute to the great Kathakali natyacharya. This is slightly in deviation from old tradition – that is Chempa talam to Atantha talam (10 to 14 matras) and an experiment in ragamalika instead of a single raga (usually Todi raga).

I feel privileged to demonstrate the ashtapadi in Kathakali style, accompanied by versatile musicians Sadanam Harikumar, Sadanam Sivadasan. Sadanam Ramakrishnan, Sadanam Jithin, Sadanam Rajagopalan and Sadanam Devadasan. The lecdem is from 9 to 10 am on 23 December 2015 at the Music Academy mini hall.
Posted by Sruti Magazine at Thursday, December 17, 2015 No comments: 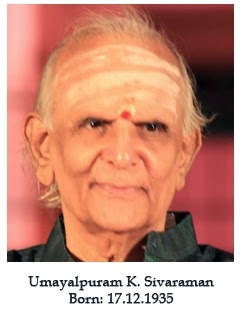 Posted by Sruti Magazine at Thursday, December 17, 2015 No comments: 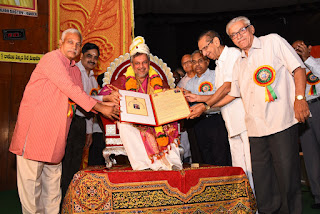 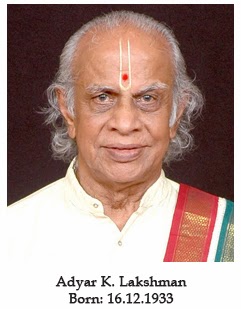 Posted by Sruti Magazine at Wednesday, December 16, 2015 No comments: 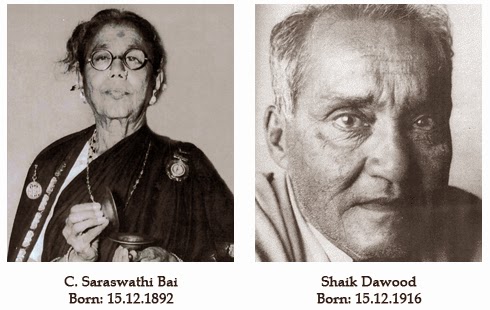 Posted by Sruti Magazine at Tuesday, December 15, 2015 No comments: 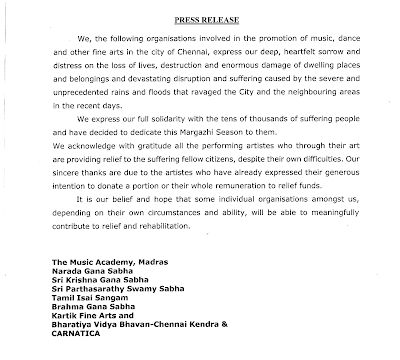 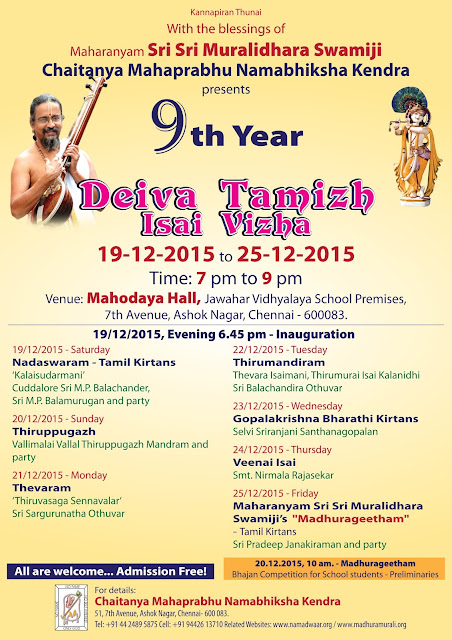