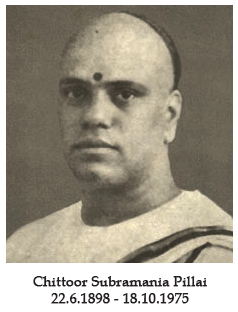 Sangeeta Kalanidhi, Isai Perarignar, Swara Chakravarti, Laya Brahma, Gaanarnava, Isai Mannar, Gaana Kaladhara and Saptagiri Sangeeta Vidwanmani were some of the titles presented to Chittoor Subramania Pillai during the six decades of his illustrious career as a Carnatic vocalist, at least in three of which he was in the front ranks. He was also a recipient of a Sangeet Natak Akademi award.

He earned plaudits not only as a leading performer but also as a teacher, especially in institutions. He was a stalwart among stalwarts in the golden era of Carnatic music. The string of awards and titles is but one aspect of his life and career. As his birth centenary is being celebrated, there should be many among the old who can recall his impressive personality and equally impressive accomplishments, but the story of his life and career must be recounted for the benefit of the young, especially those seeking to make a mark as concert musicians.

Subramaniam was born on 22 June 1898 at Gollamachannapalli, a village in Chittoor district (now in Andhra Pradesh), into a family of musicians. Perayya, his Telugu brahmin father, was a violinist employed by the Punganur Samasthanam in Chittoor district; his mother Mogileswaramma was a vocalist who belonged to the kalavantulu community. There was a tradition among the Telugu-speaking members of this community to call themselves as Naidu. Thus Subramaniam's younger brother was known as Chittoor Krishnappa Naidu. But Chittoor Subramania Naidu became Chittoor Subramania Pillai when he became a disciple of Kanchipuram Naina Pillai. Interestingly, Naina Pillai's real name was Subramania Pillai too, but he came to be called Naina (a term of endearment) by his childless maternal aunt Dhanakoti Ammal who doted on him.

Subramaniam started learning music and Harikatha from his father at a very young age and began giving Harikatha performances even as a young lad. One such performance took him to Madras (now known as Chennai). The occasion was the annual Ramanavami festival conducted by Jalatarangam Ramaniah Chetty, a great connoisseur and patron of music and musicians. There he was privileged to hear the great Kanchipuram Naina Pillai sing and the experience bowled him over. He wanted to learn at least a few kriti-s from the maestro. He requested Ramaniah Chetty to introduce him to the maestro but was instead taken to Pillai's aunt Dhanakoti Ammal. The latter, who asked the boy to sing, was struck by his fine voice, as well as by his keen interest in learning. Then and there, she taught him a Tyagaraja kriti. She also suggested that the lad should switch from Harikatha to vocal music. "Go back to Punganur and ask for your parents' permission and come to Kanchipuram," she said and added assuringly: "I shall ask Naina to teach you."

Subramaniam did as he was told and was taken by Naina Pillai under his wings. Eventually he became the maestro's most important disciple and his prime musical legatee. 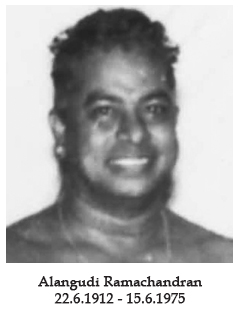 If today, ‘Vikku’ Vinayakram is synonymous with the ghatam, there was a time such giants as Tiruvilvamalai Vilvadri Iyer and Umayalpuram Kodandarama Iyer added lustre to the magic mudpot of Carnatic music. Alangudi Ramachandran was one such exponent of the ghatam, someone who made significant changes to its practice.

K. Ramachandran was born on 22 June 1912 at Koduntarapalli, Kerala and passed away on 15 June 1975. Learning the art of percussion and ghatam playing from Kuttalam Kuppuswami Pillai, Kuttalam Sivavadivelu Pillai and Needamangalam Meenakshisundaram Pillai, Ramachandran first ascended the performance stage as an accompanist of Chembai Vaidyanatha Bhagavatar. Even as a child, Ramachandran had unusual interest in music, percussion in particular, and after his father Krishna Iyer settled down at Alangudi, often walked a few miles to listen to radio concerts at Terezhundur town. Fascinated by the tavil prowess of Meenakshisundaram Pillai, he took up a job in a restaurant at Needamangalam to facilitate his joining him as a student. It was Pillai who persuaded him to take to the ghatam. Ramachandran later took lessons from mridanga vidwan Mayavaram Kuppuswami Pillai.

Big-made Ramachandran had the right physique, potbelly and all, for the effective demonstrative style of ghatam playing. Chembai Vaidyanatha Bhagavatar was very fond of him; he would not hesitate to add him as an unscheduled second ghatam artist to his kutcheri ensemble. A believer in meaningful collaboration on stage, he underplayed his role if he thought it necessary for the success of a concert. Known for his precision fingering, “the sound of his fingers would resemble hitting with steel, that too on a Manamadurai ghatam” (Centenarians 2012, Chennai Fine Arts). Even though he used a very heavy ghatam, he invariably tossed it up for dramatic effect in concerts and composed special korvais for the act, according to mridanga vidwan T.V. Gopalakrishnan, a friend, colleague and admirer.

Among Ramachandran’s happy accomplishments was his longish stint as an accompanist of M.S. Subbulakshmi and popular musicians K.B. Sundarambal and M.K. Tyagaraja Bhagavatar. He had the rare blessing of dying in harness, immediately after his tani avartanam for a D.K. Jayaraman concert at Shanmukhananda Sabha, Bombay.