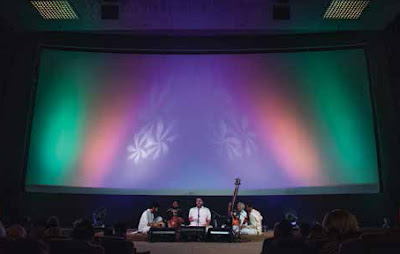 The Academy is bustling. A short walk away, Narada Gana Sabha is greeted with its signature throngs, and the traffic jam on T.T.K. Road is indicative of another season in full flow. The din is overwhelming, and a few regulars find their escapes: for some, it is a quaint house in Royapettah where, lit only by lamps, the concert’s melody remains pure. For others, it is a single screen in Sathyam Theatre, this time, with the tambura’s drone echoing off its walls. The ARTery and Madrasana offer innovative presentations, a stone’s throw away from Margazhi’s humble, century-old roots. The spaces are far from conventional but tend to bring back a style of music that we, as an audience, have probably forgotten.

“Over time there has been a drastic change in the way artists present their art. The current prosceniumlike auditorium setting is not how a concert used to be presented. Instead, it used to be a chamber performance—a temple, may be, with no amplification,” the founder of the ARTery, Ramanathan Iyer, explains.

The entrance of the auditorium, a product of Westernisation, he says, has stripped the art form of ambience, acoustics, and aesthetics. So when Ramanathan Iyer returned from the West, a career in engineering leaving his creative passions unsatisfied, he swore to restore all three. Taking ownership in 2012 of a dilapidated house coowned by vocalist S. Sowmya’s family, he refurbished the property with a solitary vision—”to present performance arts as they were meant to be presented”. “Our mission is simple: curate creativity. This could be with music, with dance, with theatre, with comedy. And boundless creativity, free of the shackles of age, seniority, and overt and opulent presentation,” he says. 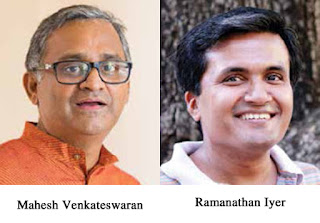 The space, he says, has perfectly dovetailed into that initial mission and as more city dwellers began to crave for what he calls the unadulterated arts, a corporate, blue collar man decided that he, too, was in search of a greater artistic experience.

“Artists have given their heart and soul for their art form. As an organiser, I felt the need to elevate the stage to respect both the artist and the audience. It is an intimate experience—thirsting for a pristine quality that honours the art at hand,” says Madrasana founder Mahesh Venkateswaran. 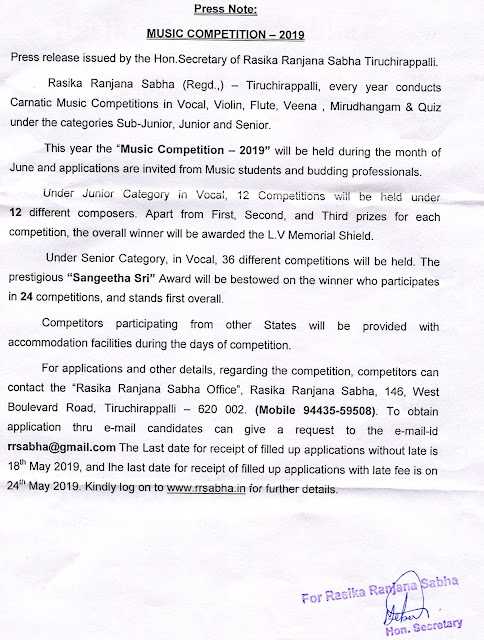 Posted by Sruti Magazine at Tuesday, April 09, 2019 No comments:

Mridanga vidwan A. Kannan passes away 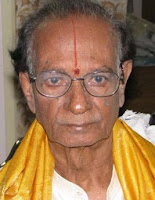 Veteran mridanga vidwan Madras A. Kannan died of cardiac arrest on 1 April 2019 in Chennai. He was 99. He was a mridangist much in demand in the 1950s and the 1960s. A contemporary of  Palghat Mani Iyer and Palani Subramania Pillai, Kannan provided mridangam accompaniment for almost all  leading Carnatic musicians of that period like Ariyakudi, Semmangudi, GNB, Maharajapuram Viswanatha Iyer, Mali  and Dandapani Desigar. He was the recipient of many awards including the Central Sangeet Natak Akademi Award, Asian Music Rostrum Award, Mridanga Samrat, Laya Ratnakara, the Kalaimamani award and Sruti's Vellore Gopalachariar Memorial Award.

Sruti offers its condolences to the family of Madras A. Kannan.

Email ThisBlogThis!Share to TwitterShare to FacebookShare to Pinterest
Labels: by Samudri 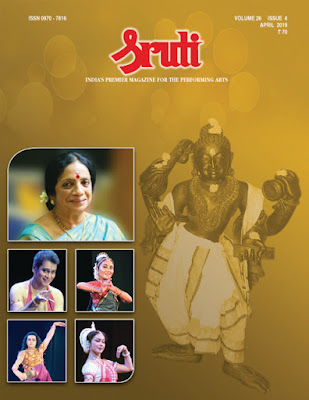 Dreams we dare to dream do come true if we have the courage to pursue them. Having a dream is important for it helps us to set our goals and achieve something big in life. With hope and endeavour, we can make our dreams come true. This issue of Sruti has a few stories about the achievements of those who dared to dream.

Padma Subrahmanyam, dancer-scholar who pioneered Bharatanrityam and is known for her pathbreaking research on the karanas, dared to dream a mammoth one. She wanted to construct a unique memorial for Bharata, author of the Natya Sastra. It took her about 25 years, but a winner is a dreamer who never gives up. By relentlessly pursuing her passion and by involving the dance fraternity and philanthropists, she realised her dream in the successful establishment of the Bharata Ilango Foundation for Asian Culture near Chennai.
Dr. V. Raghavan, whose 40th death anniversary falls in April, was a visionary. His steadfast dedication to a variety of causes—be it literature, heritage or the performing arts—saw him emerge as a pioneer in Indology. Raghavan’s love for the Sanskrit language and devotion to Sanskrit drama led him to launch the Samskrita Ranga 60 years ago. In this issue, his son and daughter share with us the story of his deep involvement in all he did. In spite of facing difficult circumstances, Samskrita Ranga is continuing the good work.

K. Omanakutty who received the Sangita Kala Acharya award from the Music Academy this year, is an admirable amalgam of concert musician, guru, academician and administrator. A busy artist for over 60 years, she has, by dint of hard work and by pursuing her passion to explore, learn and analyse, become a role model for students of Carnatic music in Kerala. We present an interesting article on her by one of our diligent contributors, C. Ramakrishnan, who has been writing a series on musicians of Kerala.

Another personality who had the courage to think differently and was willing to travel the unexplored path was Rukmini Devi Arundale. The establishment of Kalakshetra—a haven for the arts set in sylvan surroundings—was her dream come true. Inspired by the koothambalam of Kerala, Rukmini Devi conceptualised a beautiful auditorium for the performing arts which would at once reflect the Indian ethos and intelligently combine state-of-the-art technology in its design. Her vision and leadership came to mind on my recent visit to Kalakshetra. 28 February 2019 was a red letter day for the institution when the refurbished and renovated Bharata Kalakshetra auditorium was finally inaugurated after a hiatus of six years. The jewel of an auditorium has been restored to its glory. The function was short and sweet, with brief speeches by the chairman and the director of the Kalakshetra Foundation. After inaugurating the hall, the chairman N. Gopalaswami congratulated Revathi Ramachandran and her predecessor Priyadarsini Govind on taking up this project in right earnest, and dedicated the event to Rukmini Devi’s ideals. He expressed the hope that the institution would travel on the path visualised by the founder. Mentioning that procedural lapses had resulted in time overrun and cost overrun in the project, he said there was an object lesson to learn: “For those who deal with public money, implicit adherence to procedures is a must.”

In this issue too, we have tributes to S. Rajam on the occasion of his centenary. There are also interesting impressions of the dance season, with questions raised about selection of artists.
S. JANAKI
Posted by Sruti Magazine at Monday, April 01, 2019 No comments: