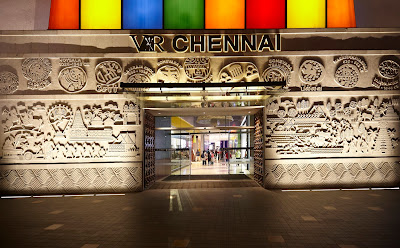 The newly opened Virtual Retail (VR) mall located in the up-market neighbourhood of Anna Nagar, stands different from most malls in Chennai. Its unique building design incorporates features of ancient south Indian architecture. Starting from its entrance, the walls, paintings and sculptures are aesthetically designed to present our rich art, culture and history with a view  to educate future generations.

On 5 May 2019, VR Chennai launched “Kathai-Kalai-Parampariyam walks”, tracing the rich heritage of south India by way of "stories, art and heritage". “We hope that the Kathai-Kalai-Parampariyam walks will engage and amaze city residents and tourists alike, and take them on a journey that connects them with the rich, albeit sometimes forgotten, heritage of this bustling, modern metropolis,” says Siddharth Yog, founder and chairman of VR. The objective is to make Chennaites and tourists aware of the art and culture of south India.

The kathai walk on day one was ably conducted by historian Sriram V who explained all the tales of the Dasavataram in a crisp manner within 45 minutes. The 10 manifestations of Lord Vishnu have been beautifully portrayed at 10 different places in the mall in various forms like   sculptures, paintings, carvings and lights. The participants of the walk were provided with a receiver and a guide. The walk started from the entrance of the mall where Sriram launched his narration with the help of a mike and receivers.

Matsya, the first avatar, was represented as a three-feet long catfish, laser-cut out of a metal sheet and located in The Tamarai Sadukkam — a small pond-like structure located at the entrance. After narrating the tale of this particular avatar and explaining other traditional designs in the mall such as the structure of the gopuram, the temple tank and the mahadeepam, the participants were escorted to the place where two huge beautiful paintings depicting the churning of the ocean of milk (paarkadal) were mounted on opposite walls. One depicted the devas or gods holding one side of Vasuki the snake while the opposite wall was full of the asuras or demons. The story of Kurma, the second avatar of Lord Vishnu, was narrated here. The lights on the ceiling near the paintings was of an aesthetic design with three colours — green, blue and gold to depict the poison, water and nectar. The Kurma avatar or tortoise, carved out of green stone, was placed along a water stream. 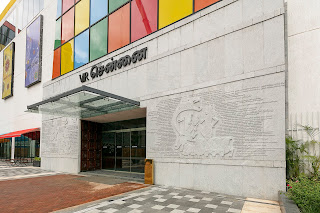 Varaha, the third incarnation, was in the form of a water fountain at the side of the mall, while Narasimha was depicted in a hand painted mural on the ceiling. Its location being “neither inside nor outside” in keeping with the reference to the tale, was captivating. The stunning mural depicts the scene of Narasimha pulling out the entrails of Hiranyakasipu. The Vamana avatar is represented in a 15-feet mural on the outside wall of the mall, capturing the moment when King Mahabali offers his head for the Lord to place His foot. A mural on another outer wall shows Parasurama, the next avatar, being blessed by Varuna, the god of water, as he sits in meditation in Gokarna.

The avatars of Lord Rama and Krishna are in the form of hand carved wall art, the design inspired by the Ramaswamy temple in Kumbakonam in Tamil Nadu. The last two avatars of Buddha and Kalki are located in a separate building with a quiet and peaceful ambience.
There is a seated sculpture of the Buddha in his form of  'amoga siddhi'; and then, we come
across an interpretation of the Kalki avatar designed with brilliant lights. There was a 300 kg “uloga bell” with all the 10 incarnations of Lord Vishnu carved on it, placed on the side entrance of the mall —  it was a delightful sight! 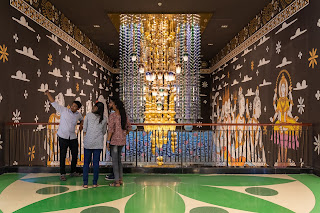 All the sculptures, paintings and carvings are by local artists. In order to encourage and nurture indigenous art and craft, VR is collaborating with local artists and guilds like Kalarings Art studio, Cholamandal Artists’ village, Klove studio, Satish Gupta and Sri Sankara Silpa Sala.

By including architectural references to temples in the form of questions and answers, talking about their history and quoting examples from literature such as Tiruvaimozhi, Nachiyar Tirumozhi, Silappadhikaram, and Geeta Govindam, Sriram kept the entire session alive and going.

Overall, the walk was both educative and entertaining. It concluded with a short music concert by students of Bombay Jayashri,  followed by refreshments. With the increasing influence of pop culture in India, especially in places like malls and movie theatres, such initiatives to remind us of our roots, must be appreciated.
Posted by Sruti Magazine at Thursday, May 30, 2019 No comments: 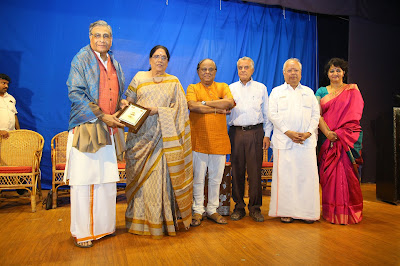 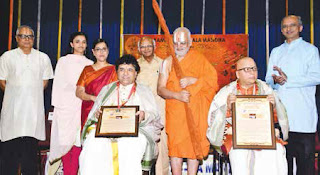 The violin duo Ganesh- Kumaresh, was conferred the title Sangeeta Vedanta Dhurina, instituted by Sri Rama Lalitha Kala Mandira, from Yadugiri Yathiraja Narayana Ramanuja Jeeyar, at the Bangalore Gayana Samaja auditorium in Bengaluru. The award comprises one lakh rupees for each artist along with silver medals and citations.
Posted by Sruti Magazine at Friday, May 03, 2019 No comments: 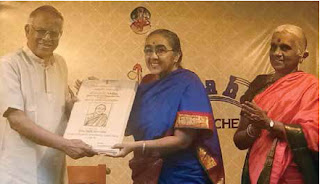 Jayalakshmi Balakrishnan, who runs Naada Inbam (Raga Sudha), received the Sreshta Sangita Seva Lahiri award instituted by Indira Ranganathan Trust from Spencer R. Venugopal in recognition of her yeoman service to promoting music, on the occasion of Women’s Day, 1 March 2019 in Chennai. It was followed by a concert of vidushi Suguna Varadachari.
Posted by Sruti Magazine at Friday, May 03, 2019 No comments: 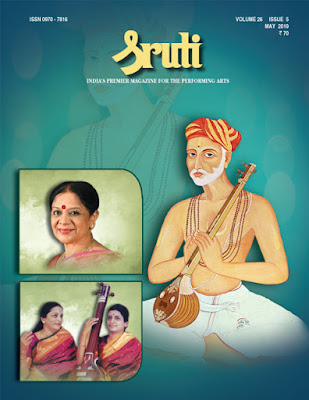 Kakarla Tyagabrahmam, popularly known as Tyagaraja, is said to have been born on 4 May 1767 according to the Gregorian calendar. We celebrate the birthday of this great vaggeyakara with a beautiful painting on the cover by the late classical painter-musician S. Rajam. Nestling in the heart of the city of Chennai, but away from its hustle and bustle, is situated a hoary sangeeta sthalam dedicated to Tyagaraja—Sri Thiagaraja Sangeetha Vidwath Samajam in Thiagarajapuram, Mylapore. Started by musicians in 1929, the Samajam is continuing its good work in a quiet way, keeping away from glamour and publicity. We trace its interesting story in this issue, and also present an analysis of a rare kriti—Sri Narasimha mam pahi—composed by the bard. It also falls in line with the celebration of Narasimha jayanti which occurs on 17 May this year, when Melattur comes alive to the sights and sounds of the Bhagavata Mela Mahotsava.

The staging of Prahallada Bhakti Bijaya in Odissi and the conference on Kathak and choreography in Bengaluru (in the News & Notes section) reflect the transition from legacy to re-alignment in the arts.

We have an elaborate profile of senior Bharatanrityam exponent Jayashree Rajagopalan, founder-director of Nrithyodaya-Mumbai who has been in the field for over 50 years. She is the recipient of the Nritya Perunjoti award from ABHAI—the Association of Bharatanatyam Artistes, this year.

Another interesting story is about the Hyderabad Sisters—Lalitha and Haripriya—who were very popular in Chennai in the 1990s but who became busy with their academic and concert assignments in Andhra Pradesh.

Not many would know about N.V. Murthy, a versatile percussionist, who accompanied both Carnatic and Hindustani musicians in the south. Sruti has always taken the initiative to write about less known artists who have dedicated their lives to the arts.

In the passing away of S. Muthiah, veteran journalist, historian and conservationist, Sruti has lost a good friend. I got a chance to meet the soft spoken ever smiling Muthiah in the 1990s. He was a well-wisher of the magazine and a good friend of the founder-editor N. Pattabhi Raman. He would occasionally visit the editorial office at Alapana and comment on the magazine’s layout, contents and have a good word for everybody. Deeply passionate about Chennai’s heritage, he enjoyed the articles, cartoons and statistics about Chennai’s music and dance season. In fact S. Muthiah was involved in printing Sruti in the initial years. He told us that he was there when the very first copy of the first issue came out of the trimming machine, and he flipped through it to make sure that they had made no errors while printing at TT Maps where he worked. Muthiah would often reproduce articles from Sruti in his fortnightly called Madras Musings. Meticulous and principled that he was, he never failed to give credit and would send us a cheque for the same though we never asked him to do so. We, at Sruti, cherish our long standing interaction with S. Muthiah — the ‘Man from Madras Musings’.
S. JANAKI
Posted by Sruti Magazine at Thursday, May 02, 2019 No comments: 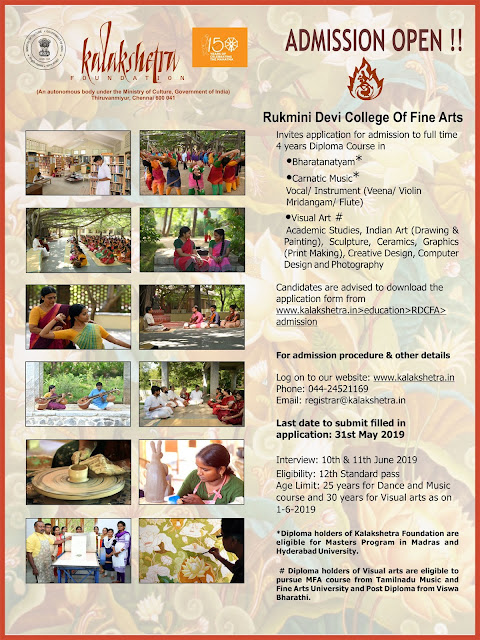