A modern-day gurukulam in Minneapolis 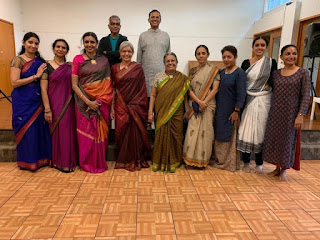 I dozed in the backseat as the car whizzed on the highway, plying me to the Koinonia Retreat Center situated outside Minneapolis. When I got out, the smell of tree bark and fresh earth filled the air. As I stood in the driveway taking in my unfamiliar surroundings, I could hear the all-too-familiar stamping of the tattukazhi with sollukattu rolling out effortlessly from Indian-American youngsters. In the first week of July, the best of Chennai descended upon a retreat centre located at a two-hour drive outside Minneapolis.

Navadarshana, a residential dance camp for Indian-American dancers was in full swing. The brainchild of Bharatanatyam dancer Priyadarsini Govind, the participants were immersed in an environment that promoted intense learning and absorption. Participants had been divided into three groups according to their skill level and received instruction in nritta and abhinaya. 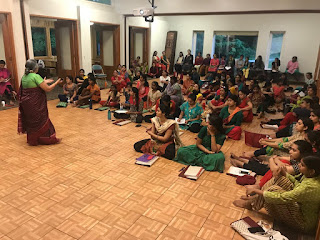 “Navadarshana”, was a camp that revealed an approach to learning Bharatanatyam; Senior gurus shared their expertise in all areas of learning each song. Dancers Aler Krishnan from San Diego and Chitra Ramaswamy from New Jersey dealt with the operational logistics for the programme and everything on the schedule hummed along perfectly. 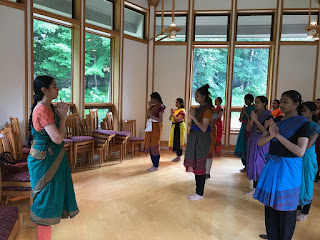 At the crack of dawn, the participants attended body conditioning classes conducted by Odissi artist Bijoyini Satpathy and Kalari classes by Muralikrishan. After breakfast, they attended classes in nritta and abhinaya. Nritta classes were conducted by dancers Anjana Anand and Priyadarsini Govind; Priya Govind handled the teaching of abhinaya for all the groups. Nithyakalyani Vaidyanathan taught nattuvangam for the songs that they learnt, while Venkat Venkatakrishnan from Dallas, Texas, taught the participants how to sing those songs, enunciating each phrase clearly. To explain the lyrics of the songs that they were learning, scholars S. Raghuraman and V.A.K. Ranga Rao participated via Skype sessions. Violinist and senior musician R.K. Shriramkumar led the senior participants in a Skype session and taught them how to sing the Desh tillana, a composition of Lalgudi G. Jayaraman. Carnatic musician  Subhashini Parthasarathy explained the nuances of raga Sankarabharanam as she brought out the beauty of the padam Intha mohamemira. In the post-lunch sessions, there were lectures by North American artists. Ramya Harishankar spoke on abhinaya, while I dealt with storytelling narratives and authenticity, urging each of them to search for authenticity in portrayal. After dinner, the participants heard from Gandhian scholar and arts writerV.R. Devika, about various personalities and forces that have helped create the practice of modern-day Bharatanatyam. 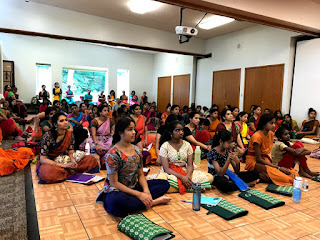 Each session created impact within the hearts and minds of the dancers. No mean feat—I thought to myself as I sat at the back of the room observing sessions in progress. Thaka dheem tadhim natru dheem the strains of the Desh tillana were played over and over as the senior dancers lined up to stamp the korvais in unison, yearning to best the previous iteration. Priya Govind spoke earnestly as she walked around the room, “the hand has to be extended to its fullest, the knees have to be turned out, and of course, the back has to be straight. There can be no shortcuts, right?” As she spoke, one could see the tiredness in the limbs as 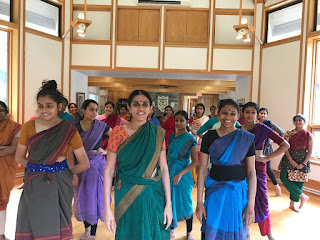 they stood—but, as she said - 1,2,3,4 - suddenly the back was straighter and the hand swept downwards in the kitatakatarikitathom with fluidity and speed, reaching the endpoint with precision. I then entered Nithyakalyani’s nattuvangam class in progress and found students in the intermediate level enunciating clearly the sollukattu for the kavuttuvam that they were learning. Hands resting on the tattukazhi, looking eagerly at her for the next request, their American accents had disappeared!

The most heartwarming presentation of the retreat came on the final day, where the 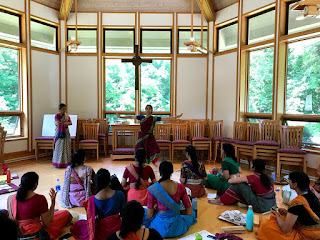 youngest set of dancers stole the show. They sang the mallari that they had learnt from Venkat Venkatakrishnan flawlessly and then demonstrated the rhythm without missing a single beat. They took turns making an announcement about the song that they had learnt from Priya Govind based on a Panchatantra fable and in an instant, they transformed into silly crows and wily foxes! When they did their final namaskaram, their eyes were shining, the back was straight and they deserved every applause in full measure. 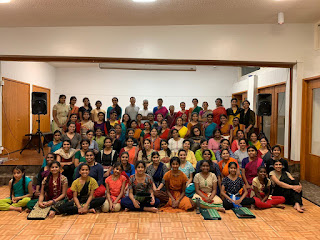 to a holistic approach to dance while exposing them to the best that Carnatic music, Bharatanatyam and dance scholarship has to offer is a laudable initiative. All over America, there are teachers dedicated to the preservation and practice of the art form, and their students are drawn from various backgrounds. The overall message of the Navadarshana dance camp to the youngsters was to do it right, as that is the only way to approach the learning of this art form.

The teachers worked and the students worked cohesively helping each other;  there 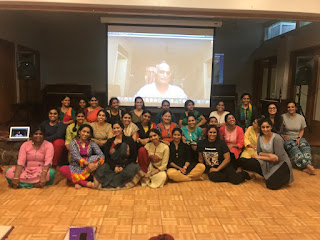 was palpable excitement to learn and absorb new material in class. “We all love the pursuit of natyam,” seemed to be the message that bound teacher and student together.

The camp taught Indian-American dancers the experience of living in what comes close to a gurukulam in the 21st century.  And, for conceiving and implementing this feat, kudos to Priya Govind, Vidya Prasad, Aler Krishnan and Chitra Ramaswamy.

(Nirupama Vaidhyanathan is the Artistic Director of the Sankalpa School of Dance in Fremont, California and the Managing Director of India Currents magazine. She holds a Master of Arts degree in Communication from the University of Pennsylvania.)
Posted by Sruti Magazine at Thursday, October 31, 2019