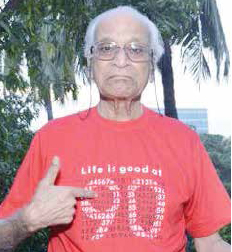 Veteran broadcast journalist P.V. Krishnamurthy passed away on 16 October 2019, in Chennai. He was 98. PVK, as he is affectionately known was born in Rangoon on 1 April 1921 and had a long and illustrious career with radio and television that started soon after he came to India as an evacuee from Rangoon in 1944. He joined the External Services Division of All India Radio, New Delhi as a newsreader cum announcer and rose to retire as the first Director General of Television in 1979. PVK was the youngest among his seven siblings. His initiation into music was through his eldest sister, Rajeswari. He bagged the first prize in a music competition in school and was accompanied on the harmonium by his brother, P.V. Subramaniam aka Subbudu, the veteran music critic!

In an interview to Sruti in May 2018, PVK commented on the current state of media.

“I am a Rip Van Winkle who retired in 1979. I don’t see much of television so I have no right to comment. But I strongly feel Prasar Bharati must show its teeth. Hundreds of people have retired without promotions and the morale is extremely down; it is not good for Prasar Bharati. I was fortunate to have worked when media was respected and people were devoted. I was lucky that I was posted in Delhi when history was being made—during India’s Independence, the partition, when Mahatma Gandhi visited the studios and when Sucheta Kriplani sang Vande Mataram. I was there not as an eye witness but an ‘ear witness’ to most of the important historic events thanks to my job in All India Radio. I have seen war, earthquakes, riots and killings and nothing frightens me!