S.V. Seshadri aka Aeolus is no more 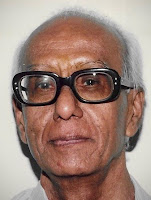 S.V. Seshadri, well-known writer, music critic passed away in Chennai on 16 October 2019. He was 94. S.V. Seshadri, famous under the nom de plume ‘Aeolus’, wrote detailed analytical reviews, combining style and substance which were a delight for lovers of music and English. His writings were published in Shankar’s Weekly from the mid-60s to the early 70s. Sruti has reproduced several of his writings. S.V. Seshadri also worked in Doordarshan and AIR New Delhi.

Here is an excerpt on M.L. Vasanthakumari’s music:

“M.L. Vasanthakumari’s voice at its clearest has the heady tang of the cold morning breeze or of fresh spring water. MLV is intelligent enough to put her voice to the fullest use. She can be as brash as a sunflower, as firm as a tulip and as delicate as a rose. Alone among the women singers, she has a male cast of mind, and wears armour of her scholarship with the ease and nonchalance of the Maid of Orleans. She is an adventurer, accepting the accidents and opportunities of the highway with a laughing unconcern that would have stood her in good stead in a picaresque novel. In ancient Greece, she might have been a votary of Artemis, springing to follow the Greek goddess in her nocturnal chase through the woods. The comparison may not be mere conceit; for in the swaraprastara, MLV displays the practised aim of a dexterous archer. Swift and unerring, the swaras fly with a feathered grace and hit the bull’s eye ten times out of ten. Pundits are never tired of equating her unconcern with flippancy, her laughter with scoffing and her freedom with apostacy. To them, MLV has only one answer. It is the joy she derives from the exercise of her swift and penetrating mind”.

To read more such writings, log on to www.sruti.com and tap in our archives.
Posted by Sruti Magazine at Saturday, October 19, 2019