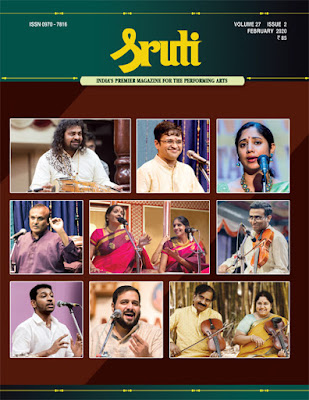 Come February, and as promised, we offer you a sumptuous fare of reviews of concerts held during the season. It is only this month and the next that we concentrate on individual reviews of music and dance, so that our readers too can savour the season—those who could not attend can get a good update, while those who did can relive it and compare notes.

There were concerts aplenty, and our correspondents were busy attending kutcheris and lecdems, taking notes in order to recreate the 2019-20 season for you. This time, however, we are not writing about the regular lecdems because many sabhas have posted them online for public viewing. Our critic C. Ramakrishnan who almost touched the century mark in attending concerts, takes you on a musical sojourn at the Music Academy as he diligently describes the rare kritis and the ragam-tanam-pallavi suite presented by several artists. S. Sivaramakrishnan, one of our earliest subscribers and a vainika himself, comments on several concerts held at Sri Krishna Gana Sabha in T. Nagar. They have together also covered the Lec Dem Mela focusing on musical instruments, held in the first week of December. Around the same time was organised a dance conference called Navadhisha—on the syntax and semantics of dance; we present an overview. Just as the flavour of the season lingers on, so will our coverage of it: a lot more on dance conferences and programmes will be published in the next issue.

The Carnatic musicians who drew a full house in most venues were Sanjay Subrahmanyan and the RaGa Sisters Ranjani-Gayatri. It is interesting to watch their large fan-following not only in Chennai but also in foreign countries and on social media. Next in the race in ticket sales and in attracting audiences in major sabhas like Narada Gana Sabha were Bombay Jayashri, Abhishek Raghuram, Trichur Brothers and Ramakrishnan Murthy. On the whole, the audience turnout this season seemed to have improved not only in numbers but also in drawing more youngsters. Bodes well for Carnatic music!

An analysis of season concerts over the years will reveal that instrumental music hardly gets its due—with all the solo instrumentalists competing for only 25 per cent of the total slots. Our ‘spotlight’ highlights the voices of some popular instrumentalists.

A peep into the past reveals interesting information about the famous MKT’s less known Carnatic concert career. Our News & Notes section has an interesting mix of events in India and abroad: a cultural concourse organised by the Central Sangeet Natak Akademi, a round up from Down Under, as well as the golden jubilee celebration of Priyamvada Sankar’s Bharatanatyam school in Quebec where she is disseminating the legacy of her guru T. Balasaraswati.

You will be happy to read about the new initiative launched by the Greater Chennai Corporation under the UCCN umbrella—the Chennai UNESCO Creative Cities Network—to take the arts to the people in public spaces. S. Natarajan who heads Aanmajothi – Cultural Wing of Saraswathi Vidyalaya, along with other members of the UCCN Committee (including Sruti represented by Sukanya Sankar), makes sure that Chennai lives up to its description of “cultural capital”. The committee members will also be involved in exchange programmes in other “classical cities of music” in India and abroad.

Talking about government patronage of art and artists, the Padma Awards were announced on the eve of India’s Republic Day. The number of awards for personalities in the performing arts is less than 20 out of the 141 names released. Veteran Hindustani vocalist Chhannulal Mishra of the Banaras gharana is the sole artist among the seven Padma Vibhushan awardees, while famous Hindustani vocalist Ajoy Chakraborty bags the Padma Bhushan (among 23 awardees). There are only a few musicians, dancers and theatre personalities (out of 118) selected to receive the Padma Shri, including two Carnatic music duos—the veteran vocalists Bombay Sisters (Saroja & Lalitha), and the nagaswaram duo of Sheik Mahaboob Subani and wife Kaleeshabi Mahaboob. It is a pity that versatile Bharatanatyam artists from Tamil Nadu do not find a place in the Padma Awards list. Several points to ponder!
S. JANAKI

Posted by Sruti Magazine at Thursday, January 30, 2020 No comments:

Gajananrao became a highly skilled violin player by the time he turned 20 and, by virtue of accompanying stalwarts from different gharana-s, he developed a natural instinct of absorbing the best from everyone. This broadminded attitude made him a scholar of music. With tireless perseverance, he also overcame the handicap with his throat and took lessons from great masters like Ustad Vilayat Hussain Khan of the Agra gharana, Ramkrishnabua Vaze of the Gwalior school and Bhurji Khan of the Jaipur-Atrauli gharana. Gajananrao was initiated in the gayaki of Gwalior gharana by his father but his quest for more took him to other musicians and he assimilated other styles in his music. He also learnt table under the guidance of Pandit Vinayakrao Ghangrekar. His parallel career was the result of a lifelong association with violin-playing and singing. 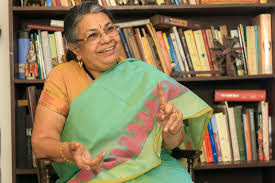 She has learnt Bharatanatyam  from The Dhananjayans and has researched folk forms. She gives lectures on the theory and practice of the dance and culture of India. She is a well-known storyteller, has authored the coffee table book “Ward 10 – Remembering Rangabashyam”, and has contributed to several national and international journals on art and philosophy.
Posted by Sruti Magazine at Thursday, January 30, 2020 No comments: 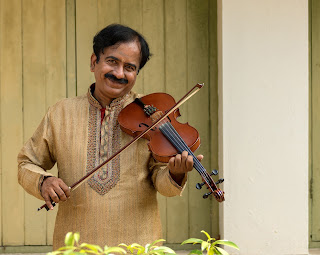 Among the team of overseas teachers for our annual 3-week Summer School, was the renowned Lalgudi GJR Krishnan, son of the late and renowned Carnatic violinist, Lalgudi G Jayaraman.

I had the occasion to sit in on one of GJR Krishnan’s violin classes: his empathy and strong communication with us all was palpable. Furthermore, at The Bhavan on 4 August 2019, we were privileged to hear his impressive solo performance. Accompanied by Bhavan’s resident percussion teacher, M Balachandar (mridangam), and Pirashanna Thevarajah (ghatam), Krishnan enthralled us all with his brilliant and sensitive playing.

He began the concert with a varnam in Nalinakanti – a composition of his father and guru, the late Lalgudi Jayaraman. He briskly followed this with Tyagaraja’s Ennadu jutuno in Kalavati– a rare raga beautifully rendered. One of the Tiruvottiyur Pancharatna kritis of Tyagaraja, Evasudha, ensued in which his scintillating swara passages thrilled us all.

A complete contrast in mood was the next item, Muthuswami Dikshitar’s, Sri Rangapuravihara (Brindavana Saaranga). In the stately vilambita laya, Krishnan’s lyrical playing bewitched us all

Followed next was the ragam-tanam-pallavi. Krishnan had chosen the 56th Melakarta, Shanmukhapriya, and treated us to an elaborate alapana; he then executed a fine tri-kala tanam. Krishnan demonstrated his utter felicity with bowing and string techniques such as glissando and pizzicato. The pallavi that followed was in the 9-beat Khanda Triputa tala, each beat taken in two rhythms, first quadruple, then triple –Chatursra and Trisra gati/nadai.

Lighter pieces then followed, such as Manasa sancharare (Sama) by Sadasiva Brahmendra and Chinnanchiru kiliye of Subramanya Bharati. Lalgudi Krishnan concluded his evening with a Lalgudi tillana in Sindhu Bhairavi.

Click on the image to view Snapshort News & Notes 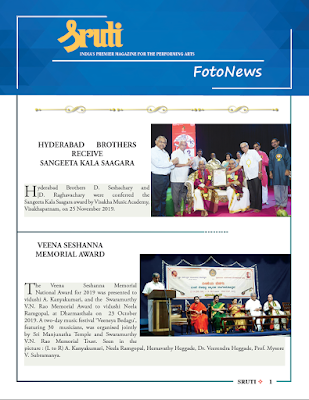 Posted by Sruti Magazine at Friday, January 10, 2020 No comments: