A precious insight into Harikatha 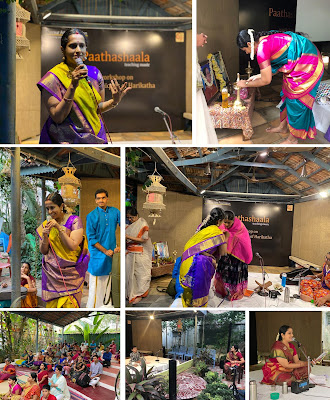 It isn’t on every Saturday morning that you gather at a  serene place covered with greenery and a vibrant aura, to get a glimpse into an ancient art form of India. Paathashala, the two-day workshop on the Techniques of Harikatha organised by Charsur Arts Foundation in collaboration with Vijayashri School of Harikatha, and conducted by well-known Harikatha exponent Vishaka Hari was more than enlightening. As a prerequisite, students filled out a short questionnaire on their basic qualifications, knowledge in Sanskrit, scriptures, and musical compositions—some of the essential criteria for participating in this workshop.

Vishaka Hari introduced the concept of Harikatha, which essentially is a one-person theatre art form, where the performer assumes the nature of the katha patram (character) and becomes one with his or her art. The topic for a Harikatha is chosen according to the occasion, the story can be developed on any plane, and the themes are endless, she said. Providing more insights she said that a learner of this art has to focus on the right mix of singing, narration, philosophy and humour while building a story. All assertions made during the katha are based on dharma.

Vishaka Hari took the participants through the various styles of Harikatha across the country. Just like any other art form, what is practiced in the northeast to Tanjavur Krishna Bhagavatar’s style, Harikatha is like a potpourri of cultures infused with knowledge and aesthetics. Following this, youngsters explored the eightfold structure of a Harikatha, such as panchapati, prathamapada, poorvapeetika, tillana, tani avartana, katha nirupanam and mangalam. To present these features, Vishaka Hari stressed that the performer must be well qualified and have knowledge of at least five languages, and a strong hold over the itihasas, puranas and other relevant texts. She pointed out that a good memory, creativity, eloquence, knowledge in music and other fine arts, and above all dedication to ones guru, are some of the prerequisites for a Harikatha artist.

The workshop was more an interactive session rather than a regular instructive workshop.  That  the participants were encouraged to discuss and exchange ideas, made it even more interesting.  As a resource, Vishaka Hari was easily approachable and made even the complex subjects, simple to understand. Her subtle sense of  humour combined with her ‘bottom-up’ approach for visualising a story, was refreshing.

The following sessions included a practical exercise. The participants were asked to perform Harikatha on various topics. “We learnt how to present a Harikatha on Krishna Leela, with the aid of Sanskrit verses/slokas from the Govinda Kathamritam.  It was interesting to see how each set of verses conveyed a different story or leela of Lord Krishna. From the tales of Gokula to Brindavana leela, every stanza came to life through Visakha Hari’s explanation.”
She also pointed out how the voice has to be modulated, be aligned with sruti even while speaking, at times, and how the performer has to be eloquent yet calm at the same time. The tone of the voice during narration would be changed according to the bhava of the katha under exposition.

During the second session, students were given handouts on slokas from Sri Sri Anna’s work Govinda Kathamritam, which describes the divine pastimes of Lord  Krishna, in different metrical forms. Students were taught to sing the slokas, the word-for-word meanings and story were narrated in detail, and suitable songs of different composers were sung for each episode.

The evening was reserved for performances by the students, based on what they had assimilated in the morning. On day one, Prahlada Charitram was presented by Varun, followed by Janani’s part one of Seeta Kalyanam. Snigdha Desiraju expounded on Bhavas in Tyagaraja Kritis, and Aradhana Anand performed Govardhana Leelai through Vishnu Shatpadi.  On the second evening, Janani performed the second part of Seeta Kalyanam, which was followed by Srinidhi’s  Prahlada Charitram, and Vignesh performing Ayyaval Charitram. The display of Harikatha by children, as small as 7-8 years, was a treat to watch; their coherence of thought and command over speech were beyond words. The audience thronged on both days to support the artists and the children. This two-day event was indeed a great initiative and an enriching experience for all the students who participated.