Bhaanotsav, was based on monologues; Bhana, Vithi, Prakarana, and Prahasan are the types of roopaka that were employed as a tool to educate the society in which exist social evil - drawing from Bharata’s Natyasastra which showcased the marga (way) through marga-sangeet (music), marga-nritta (pure dance), and marga-natya (drama).

The word Bhaan rang a bell for all those who grew up on the stories of Gopal Bhaan/Bhaand, a court jester of Raja Krishnachandra of Nadia, Bengal (1710-1783). These Bangla stories, based on the exploits of Gopal Bhaan, are dipped in humour and yet offer valuable social messages. The long sustained notes of music of yore helped in meditation, the body movements of dance depicting the creation of the universe, helped in understanding the philosophy of life, and the satire-dipped drama openly described the social scenario of those times, with both its good and bad sides. The audience was free to draw the conclusions. 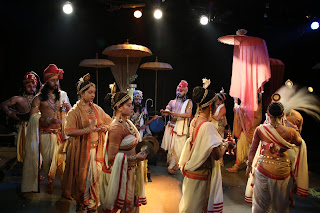 Roopaka
Naatya was categorized in dasaroopakas (ten distinct modes) led by natak, the grandest form of roopaka spanning a long period of time, stringed by its erudite sootradhar. Bhaan, on mundane (laukik) platform, covers only one day’s happenings narrated by a Vita, a character belonging to the middle class with his leanings towards amorous love and valour.

From this angle, the storyline of Padma-Prabhritakam (the lotus consent), written by ancient Sanskrit-playwright Shudraka, blatantly exposes the hypocritical attitude towards the prostitutes who, like Siva, swallow the poison to allow the society flourish in art, culture and related etiquette. Sayak Mitra, as Vita, brilliantly applied the monologues (Bharati Vritti) supported by subtle aesthetic sense (Kaishiki Vritti) and ekaharya to portray several characters through light-hearted jibes and addressed serious social and psychological issues. The layout of the scenes added to the authenticity of the narratives, written and tuned by Mitra, a worthy disciple of Bhattacharya. 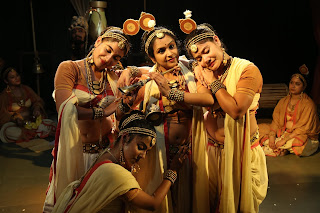 Day-two featured Bhanak and Bhanika, two upa-roopakas (abstract dance poetry), which heavily rely on music and dance. These minor dramatic forms that developed in the medieval period were employed to elevate spiritual awareness of society. Bhanak (Sayak Mitra), representing Siva, sits under a symbolic banyan tree brought in by the performers in a procession, and through song, dance and dialogues explained and related the seven notes with seven vortex centres and seven dimensions of consciousness. Bhanika (Pinki Mondal), a female raconteur who heard teachings of several wise ones, established different stages of human life through the saga of Dasavatara – as elucidated in Vajrayana Buddhism. 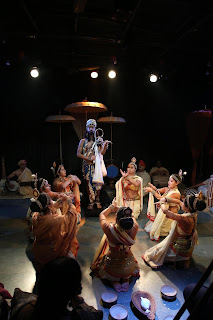 Bharatmuni opened the doors wide by prescribing any language or instrument capable of manifesting the desired rasa and moral value. The research team (Tanmay Bhattacharya, Rakesh Das, and Deep Ghosh) employed this well. Participating artists, Akash Mallik, Shubhendu Ghosh, Rinki Mondal, Manjira Dey and several others along with the musicians (Abhijit Ray, Joy Dalal, and Piyal Bhattacharya), designers and technicians infused life in the characters and their times.