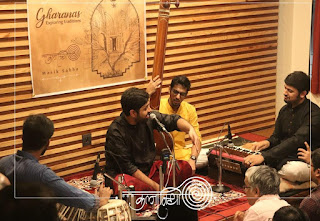 Kalanidhi, a music circle in Pune, kicked off its fifth year with its first chamber concert in the ‘Masik Sabha’ series on 19 January 2020.  In keeping with the theme of Exploring the intricacies of Jaipur Atrauli gharana for the concert, the artists featured were two up-and-coming khayaliyas of the gharana - Nishad Matange and Devashree Navaghare-Bhargave. The former presented ragas Bahaduri Todi and Kukubh Bilawal, both being melodies that are closely identified with the Jaipur Atrauli gharana, while the latter presented ragas Komal Rishabh Asavari and Suddha Sarang, ragas that are frequently rendered by artists from other gharanas as well.

Both artists gave a good account of the solid taleem that they have received from their respective gurus – Manik Bhide, Rajshekhar Mansoor and Ashwini Bhide Deshpande (for Matange), and Manjiri Asnare-Kelkar (for Navaghare-Bhargave). The distinct stylistics of the Jaipur Atrauli gharana - the usage of the khula aakaar, laya-oriented systematic development of the raga, maintaining of the sanctity of the structure of the bandish, use of behlava, were in evidence in both performances and elicited appreciation from the knowledgeable audience. Both performers were ably and unobtrusively accompanied on the tabla by Pranav Gurav, currently a student of Aneesh Pradhan, and on the harmonium by Ameya Bicchu, a student of Tanmay Devchakke

In addition to the objective of giving a concert platform to budding artists, the other objective of the ‘Masik Sabha’ series is for these artists to share their perspectives of the art form and how they relate to it. Both Matange and Navaghare-Bhargave spoke about and fielded questions from the audience on their individual takes on the relevance of gharanas and what this tradition means to them in the context of their grooming in the Jaipur-Atrauli gharana. The take-away for the audience was that while influences – whether incorporated consciously or unconsciously - from other gharanas are inevitable in today’s day and age, the aesthetic viewpoint and the stylistic approach of performing imparted in the Jaipur Atrauli gharana is central to their art. 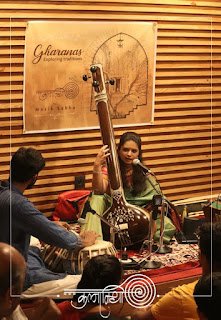 The venue for the programme was the music chamber created by industrialists Shrinivas and Padmaja Gadre at their bungalow in Kothrud. With its intimate setting and excellent acoustics, it provided the perfect setting for the chamber concert (baithak or chotekhani mehfil). It is also heartening to note the increase in the number of music circles/sabhas in the Mumbai-Pune area that are organising chamber concerts and the encouraging turn-out for such concerts.  Several of them are run by musicians themselves – in the case of Kalanidhi, it is run by the Gurav family consisting of tabla artist Milind,  khayal exponent Aparna, their son, Pranav, and their daughter-in-law, Komal.

(The author is an IT professional, a rasika and blogger)