Started by guru Gangadhar Pradhan in the year 1986, the five-day Konark festival of dance is like no other and attracts people from all over the world. The festival is organized by Odisha Tourism and Odisha Sangeet Natak Akademi. With the beautiful backdrop of the ancient Sun temple, all the performances are conducted in an open-air auditorium, and dancers emerge from their abode with the tinkle of their ankle bells and the sound of music from instruments combined with sonorous singing. The entire place, decorated with multi-coloured festoons of light and Odisha artefacts, created visual grandeur.

Odissi, Bharatanatyam, Kuchipudi, Kathak, Mohiniattam and dancers from Bali, Indonesia were chosen to perform this year. Apart from the main dance festival, the beach of Chandrabhaga offers the famous Sand Art Festival, which also attracts sand artists from far corners of the world, as they compete to win a prize from the Odisha Tourism Development Corporation.

One performance on each day showcased the state’s very own Odissi dance. The festival opened with Anweshana, from Srjan, the house of revered guru, Kelucharan Mohapatra, currently spearheaded by its artistic director, Ratikant Mohapatra. Anwesha was a bouquet of Odissi dance; modern, yet classical. Commencing with an invocation to the Sun God, the foremost of the nine planets, his disciples performed the Hamsadhwani pallavi, a creation of guru Kelucharan Mohapatra, who had initially designed it for a solo performance. Ratikant Mohapatra had beautifully re-choreographed this piece to suit a group rendition. Prayer to Goddess Bhagawati and a tribute to the nation concluded his recital. 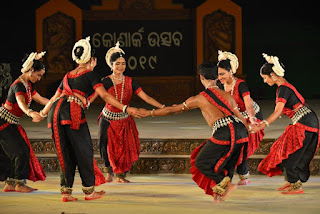 Aloka Kanungo also a direct disciple of guru Kelucharan Mohapatra presented a new idiom, Sabda Nrutya, which she had created by adding new sensibilities to the original form. Sabda Nrutya was presented by her along with her talented students in Dasa Mahavidya. The power of Shakti, the formidable energy-revealed through her ten manifestations with the use of tantra, mantra and yantra was the dancers’ tribute to all great women. Her strong musical ensemble consisting of guru Laxmikant Palit, Prof. Ramhari Das, Himanshu Swain and guru Dhaneswar Swain, guided her all through. A pallavi,  Mana sambhar in raga Sankaravarnam referred to the three times repetition of one of the four rhythms in the Odissi parlance. Jamuna kulare krushna eka dui jana was an expressional dance which blossomed fully with young gopis who were puzzled on finding two Krishnas on the banks of Yamuna. The emotion of wonder was suitably displayed in all its subtlety.

Swapnarani Sinha, a disciple of guru Durga Charan Ranbir (Deba Prasad school), and her group presented a different flavour with their vibrant dancing. Conceptualised by Swapnarani, her Triveni sangam dealt with the story of the confluence of the three rivers. Several mythological stories were collated to narrate the tale, upholding the sanctity and purity of the rivers. Professor Ramhari Das composed the music and wrote the script and guru Dhaneswar Swain composed the rhythm. Agni stuti in raag Bibhabari Kalyani to the rhythm of Dhaneswar Swain presented the story of Agni.

Prahlada Natakam, based on the popular folk dance of Ganjam district, by guru Gajendra Panda, however, did not fit the bill of Odissi.  Tandava nritya of the elephant headed God performed before the dance-drama embarked on Sabdaswarapata. This was performed to a packed audience until the story ended.

The grand finale of the festival was by Guru Kelucharan Odissi Research Centre (GKCM Odissi Research Centre, Bhubaneswar) with their presentation of  Hamsadooti –The Swan Messenger. It was one of those rare, mythological stories conceptualised by Sangita Gosai to music and rhythm composition of Swapneswar Chakraborty and Satchidananda Das, choreography by guru Kasturi Pattnaik. The story is from the Harivansa Maha Purana. The main characters of the story were the golden swans and the demon king Bajranava –enacted through an excellent rendition of Odissi dance by Yudhistir Nayek. Performed in the grand open-air stage, the piece was a gripping dance-drama.
Kathak was presented by the disciples of Nadroop of Pune run by guru Shama Bhate. Footprints of tradition showcased tradition and also brought about different flavours in its rendition. Surya Vandana and presentation of Roopak taal comprising uthan, thaat, aamad, tatkar, natabari bol, paran and tihai preceding kaliyadaman and chaturang in raag Kedara, was an amalgamation of tarana, sargam sahitya and dance, accompanied by pakhawaj.   It was a sheer aesthetic delight to watch this group of well-trained dancers. 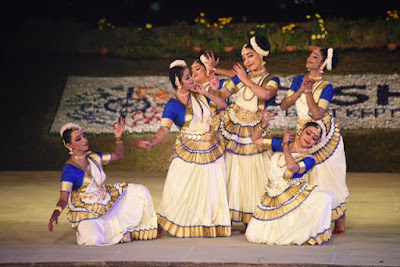 Mohiniattam dancer Jayprabha Menon was at her delightful best in Tatvam. Relying totally on sopana sangeetam of Kavalam Narayana Panicker, she struck a chord with their Rasa Ganapathy in ragam Kuntalavarali and talam Adi. Her group also performed Chandana charchita neela kalebara –an adulation of Krishna by the gopis who indulge in Ras Leela with him from the Geeta Govinda. In Narayana Guru’s Naga Tatvam she touched upon knowledge of the awakening of the primordial energy through the power of the snake in ragam Punnagavarali and Adi talam. Jayprabha effectively imitated the popular practice of playing the magudi by the snake charmer. Her fine expression and nritta along with her well-trained group of Mohinis said it all. In the finale, Jayaprabha and her group presented Jeeva, where they emphasized the rhythmic syllables in the 14-beat sopana sangeeta tala.

In their Kuchipudi presentation, veterans, Raja and Radha Reddy, portrayed the winds of change that are fast spreading in our motherland.  Through their dance-drama Bharata Bharati, they reminded us of the richness of our motherland and the message of peace, non-violence and truth we represent. Portraying Bharat as a land where the Natyasastra originated, as a land of the vedas, where many religious practices are followed, and yet people live amicably. Every detail of their presentation was rooted to tradition. The dancers had practised to perfection as they spread joy to the onlookers. Guru Raja and Radha Reddy’s appearance to act out the navarasas was applauded by the lay and the connoisseurs alike. Guru Kaushalya Reddy’s nattuvangam was praiseworthy.
Vaibhav Arekar, a bright star in the firmament of  Bharatanatyam is also a well-equipped theatre person. His Surya Namaskar was unique in more than one count. Beautiful light designs by Susant Jadav to highlight crucial parts of the presentation like that of the rising sun, which was portrayed elegantly by Vaibhav. Neat presentation and some wonderful rendition of dance units woven together with dance phrases were delightful to watch.
Vaibhav, along with his group, performed jatiswaram, transforming the pure nritta piece into a work of art never seen before! The ever-changing designs playing with the swaras were pleasurable. The piece, in the hands of Vaibhav, acquired a new character. Medieval poet Jaydeva’s Dasavatar also had a different take. He praised Kesava’s ten manifestations with much creativity. A polished dancer, he ignited his students to perform their very best. This reviewer has the aspiration to see Vaibhav work more wonders with traditional pieces that our eyes have got tired of seeing.
The Balinese dance group, Widya Budaya from Indonesia, performed Selat Segara a contemporary choreography of a traditional temple courtyard dance to welcome the audience. The disappearance of Sita was taken from the Ramayana and presented in magnificently bejewelled and bedecked costumes; the dancing, unfortunately, had precious little to offer.