The inauguration ceremony at the Music Academy’s 14th Dance Festival struck the right notes. Senior Bharatanatyam dancer Priyadarsini Govind was conferred the title of Nritya Kalanidhi 2020, and in her acceptance speech, she  thoughtfully thanked both—the legendary traditional families who had bestowed on India the great art of natya, and the later non-traditionalists who had worked to make the art suit the social and proscenium compulsions of the time, which had enabled dancers like her to take to the art form of Bharatanatyam. Chief guest Mark Van de Vreken, Consul General of the Kingdom of Belgium, Chennai, said he was working on increasing cultural exchange programmes between India and Belgium. Not the least was the thanksgiving by Sujatha Vijayaraghavan, member of the executive committee, wherein she meticulously mentioned every department contributing to the mounting of the mammoth festival.

With the scheduled 8.30 am start on the first three days, featuring panel discussions on Spirituality and classical dance, Insights and adaptations from folk dance and theatre, and The evolving classical dance pedagogy, followed by performances in the main auditorium right up to 12.45 p.m., with the newly added post-lunch break recital from 2 pm to 3.15 pm, then again the final evening recitals from 6 pm to 9.15 pm—it was a daunting timetable for even the most ardent dance lovers. That all the sessions attracted good audiences, with the evening shows demanding early arrivals to command seats in the first few rows—were pointers to an event that has caught the public eye, and hopefully will continue to do so.

From the very senior to the very young, the selection committee would seem to have cast the net wide in its search for talented dancers across the spectrum, though with some surprising choices. 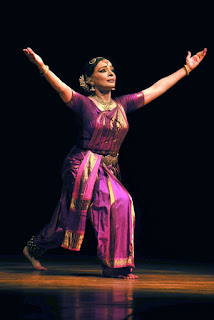 Among the senior frequently featured dancers, Malavika Sarukkai’s intense recital, evinced high-quality energy, starting with Tyagaraja’s Sambho Mahadeva in Pantuvarali, the dance elaborating on the paramadayakara Gangadhara depicting Ganga during her descent contained in the matted locks of Siva. In the Karnataka Kapi varnam of Swati Tirunal, Sumasayaka, the wonderment shifted to Padmanabha reclining on the serpent bed of eternity, with the lovelorn nayika, a victim of Manmatha’s wiles, ardently waiting for her beloved. Neela Sukanya’s nattuvangam, Vasudha Ravi’s vocal support, with Nellai A. Balaji (mridangam) and Srilakshmi Venkataramani (violin), made up the involved musicians. The best of the recital came in S.V. Seshadri’s lyric Aaparcchanam with music in Bhairavi by Meera Seshadri, woven round a brave ruler’s leave-taking of his mother before setting out for war. Malavika’s visualisation of the subjects enthusiastically responding to their King marching to battle, as the lonely mother looks  on from the balcony, with pride and trepidation, made for one of the most moving scenes. With Malavika’s known relish for rhythm and footwork, C.V. Chandrasekhar’s Laya in raga Durga made a fine ending.

The audience loved having Alarmel Valli back on stage after a period of forced absence, looking fresh and taking off from where she had left. Dance inspired by poetry has to become poetic to stand out. The evening commenced with Scents of the Earth, with its dance images stirred by verses from Ritu Samhar, from Bharatiyar’s songs, from verses for harmony from the Atharvana Veda—all serenading nature in a variety of hues, set off by Rajkumar Bharati’s ragamalika score. Valli’s varnam Kana aavalanen with Prema Ramamoorthy‘s ragamalika music, incorporated the sensual and the sacred in the nayika’s love, with spring beckoning, for her peerless Lord Siva Chidambaranatha in Tillai. One salutes Valli’s sensitive selection and moving rendition of Pushpam Vilapam by Karunasri Jandhyala Papayya Sastry, describing the plaintive cry of a flowering plant. 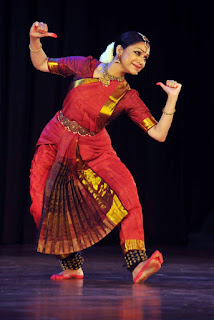 Stage presence with the ability to communicate across cultures, are Rama Vaidyanathan’s plus points—she had designed her presentation as a beautiful bouquet of compositions in praise of Lord Subramanya. Subrahmanya bhujangam as invocation, performed to singer Sudha Raghuraman’s fine score in Chalanata, set the tone, narrating aspects of the deity, starting from his unusual birth. The concluding composition based on Devaraya Swamigal’s ragamalika Kanda Shashti Kavacham came as a soulful offering to Kartikeya, a deity dear to Tamil hearts.  Dandayudhapani Pillai’s varnam in Poorvikalyaani Swamiyai azhaittodi va, in the brilliant teermanams composed by the late Shivakumar saw Rama at her nritta best, with fine nattuvangam by S. Vasudevan. But the dancer endlessly spinning out statements like taamadam seyyalaaguma amounted to self-indulgence, naturalistic expressions and mannerisms (which all dancers have in some measure) at times overwhelming stylised interpretation. And the singer setting off on her own musical forays disturbed the togetherness of dance and music. 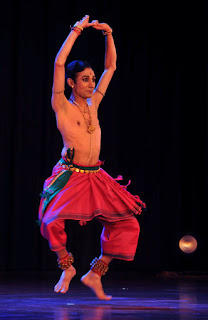 For choreographic originality, none could beat Praveen Kumar with his unique  interpretation of Muthiah Bhagavatar’s daru varnam Matey malayadhwaja in Khamas. His jatis were a class by themselves, each fitting with the sahitya it follows.  Equally rare were the other compositions with the Suddhananda Bharati composition in Durga, Aadum azhagai parade Ambalavan, where like a lakshana geeta, movement theory is touched upon—kaikalin vazhiyinil kangal irandum sella (where the hands go, there the eyes follow)! Subramania Bharati’s composition Teertha karaiyiniley showed for a change, the love-struck hero waiting eagerly for the nayika who fails to turn up. In the Purandaradasa devarnama Yasoda amma ettikkolamma (carry me Amma), the oft-heard cry of little ones, was sensitively interpreted. Armed with his immaculate technique, Praveen is fast evolving into one of India’s finest Bharatanatyam performers. He had a fine singer in D.S. Srivatsa, with nattuvangam by D.V. Prasanna Kumar, mridangam by Lingaraju, and flute and violin by Mahesh Swamy and Mandya Nagaraj—all in perfect agreement.

Bijayini Satpathy took the Music Academy floor on an auspicious day—the birthday of guru Kelucharan Mohapatra. She could have dedicated her recital to the great guru, instead of which she made the announcement dedicating the programme to register her opposition to the CAA. While she has every right to her opinions, one wondered if a dance/music festival which brings so many people together in like-minded enjoyment of the arts was the place to make an announcement, which in a palpable manner (even while there was clapping) brought in a feeling of the ‘we’ and the ‘they’. There are other platforms for voicing political views. 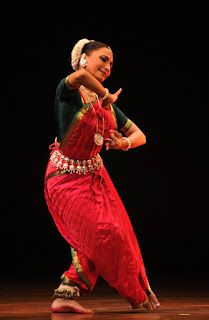 Starting with Kelucharan’s Mohapatra’s mangalacharan with Syamala dandakam as stuti, Bijayini rendered Srimati (choreographed by Surupa Sen with music by Raghunath Panigrahi) where a woman makes her beauty an offering to the Lord. While Bijayini’s Odissi is in a class of its own, I was surprised at the plain green costume with a small border which had nothing of the Odisha textile or design. The ashtapadi Sakhi he Kesi mathanam udaram, as choreographed by Surupa, was followed by the dramatic Seeta haran narrating the abduction of Seeta and the sacrifice of Jatayu who tries to rescue her from the clutches of Ravana.

Having seen the same item performed by Bijayini ten days earlier at the Bharati Vidya Bhavan, I felt the old magic was missing, despite her singer Jateen Kumar Sahu being in better form than he was during the earlier performance.

The standing ovation notwithstanding, for those who had witnessed the earlier performance, the best of Bijayini was, for some inexplicable reason, absent.

- to be continued in the next part.