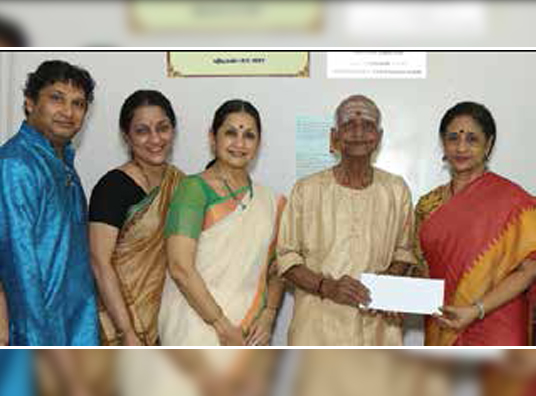 The year 2020 began as usual with festivities connected with the New Year. In Chennai, the cultural capital of India, the December- January Margazhi Mahotsavam was slowly coming to a close with most sabhas boasting of more than two months of non-stop programmes featuring thousands of artists from all over the world. February heralded the festival of Sivaratri when dancers congregated at the thousands of Siva temples to participate in dance festivals celebrating the Lord of Dance, Siva-Nataraja. March saw the commencement of the annual and board exams for students and a general lull in cultural activities. It was a bolt from the blue for the fraternity of artists world over when the deadly Corona virus struck and literally stunned people into a shocked silence and inactivity in the form of the “lockdown”. Realisation about the enormity of the situation dawned slowly with everyone trying to come to terms with the novel challenges in day to day life.

Members of the artistic fraternity were preparing themselves for the various tours abroad for performances, arangetrams, workshops and other assignments for extended periods of over five to six months. How would the lockdown affect their livelihood? The first reaction was one of shock, disbelief, and dejection, which got slowly transformed into acceptance of the current situation and drawing up of plans to deal with the crisis.

Steps were required to resurrect the largely unorganised sector of culture comprising mainly of professional and non-professional artists from various classical dance and music styles, as well as the thousands of folk artists and traditional arts & crafts persons who were rendered jobless.

The Association of Bharatanatyam Artistes of India (ABHAI) has, over the years, been playing a proactive role in artists’ welfare. This time too it soon swung into action. The organisation’s president, Roja Kannan, shares how ABHAI implemented its plans.

“We had to take some hardcore decisions on how to deal with the crisis that artists were facing because of the pandemic and how to find intermediary and immediate solutions to their day to day problems. An emergency committee meeting was convened online and thus was born the initiative called ‘Abhai—Artistes for Artistes Welfare Fund’.

An appeal for funds was framed by means of a video which was produced by Abhai, wherein all the committee members performed, and I appealed for funds at the end. The songs were carefully chosen, keeping in mind the gravity of the situation, and the need to gain strength from one another in a spirit of mutual give and take. We put together lyrics of poet Sahir Ludhianvi which speaks of equality and equanimity, verses from Ramalinga Adigalar’s Jeeva Karunyam which talks of compassion towards everything on Earth—the flora, fauna, the hungry, the poor and the sick, and finally verses from Maitreem bhajata which talks of universal peace and harmony. Each committee member recorded his/her portion from home and with some in-house editing skills we launched the appeal-video on Tamil New Year’s Day on 14 April. The video was shared through all our social media platforms, as well as the Abhai WhatsApp groups comprising nearly 3000 members, in the spirit of self reliance or ‘atmanirbhar’.

The response was immediate and heartwarming. What started as a slow trickle has now transformed into a steady flow with the donations received so far amounting to over thirteen lakhs rupees. We are humbled and happy to state that all these donations have been from fellow artists, students, rasikas and the general public who have supported our initiative. The stony silence from a section of artists and the hate and sarcastic emails that were circulated did not deter us even a tiny bit from our mission to revive the spirit of the artistic fraternity and help them gain a foothold till things settled down. The lack of government support also did not matter to us.

Our disbursements till end of May have been to the tune of over 12 lakhs rupees. The total number of artists helped is around 162, which includes dancers, teachers, members of the orchestra (vocalists, violinists, flutists, mridangists, tambura artists, special effects artists, tabla artists), make-up artists, costumers, tailors, stage decorators, lighting technicians, instrument makers and repairers, folk artists, puppeteers, members of the Irula and soothsayer communities. The list is long.

This is an ongoing process of ABHAI—for the artists, by the artists, to the artists—a mission that we as an organisation of artists, hav  committed ourselves to engage in apart from our regular schemes like monthly medical assistance to old and indigent artists as well as outreach programmes in Corporation and Government aided schools to take the arts to the grassroots level.