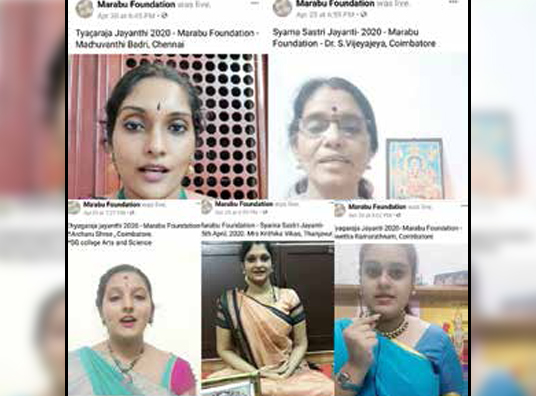 My father used to tell us “Never hate anything. If you do, you may have to live with it forever”. That said, I had to make peace with my contempt for social media and accept it with all the positives it has to offer, especially when it has the world tied up together during these testing times.

Every year, the janma nakshatras of Syama Sastry (1762-1827) and Tyagaraja (1767-1847) are important events at Marabu Foundation, Tillaisthanam. Since its inception, we at Marabu, have had the blessing of paying musical homage to the great saints in their houses. In the month of Chaitra, on the day of Kritika nakshatra (the birth star of Syama Sastry), Marabu Foundation has been presenting a special musical offering at his house in the morning, followed by a concert in the evening at the Tanjavur Bangaru Kamakshi Amman Temple. The celebration has always been preceded by a workshop to teach some of his priceless compositions in the usual gurukula pattern at the Marabu house, Tillasithanam, where the candidates are handpicked and taught free of cost by senior music teachers.

This year too I had elaborate plans in mind to celebrate Syama Sastry’s jayanti. I had planned a musical homage covering all the important sthalas pertinent to him like Kanchipuram, Tiruvarur, Tanjavur and Tiruvaiyaru, while depicting how Bangaru Kamakshi had travelled with the family for more than two centuries until the Maratha ruler brought them all to Tanjavur.

It is said that Syama Sastry’s ancestors were anointed to be the official pujakas of Bangaru Kamakshi Amman (then in Kanchipuram) by Adi Sankara, and fearing the invaders, they fled with the deity from Kanchipuram to several places. It was King Tulaja (1763- 1787), the Maratha ruler of Tanjavur, who brought the family and the deity to Tanjavur, by building the temple and presenting the family with a house and lands for comfortable living.

With regard to Tyagaraja, Marabu had conducted workshops on his kshetra kritis (Lalgudi, Tiruvottriyur, Srirangam and Kovur) four years ago which was facilitated by gurus Leelavathi Gopalakrishnan, Shyamala Venkateswaran, Prema Rangarajan and Bhushany Kalyanaraman. While his ghana raga pancharatnas are popular and widely sung, his kshetra pancharatnas are not sung as groups, although kritis like O Rangasayee, Dharini telusukonti, Ee vasudha and Sambho Mahadeva are very popular. It was my keen desire to have these 20 kritis sung by the workshop participants on Tyagaraja’s janma nakshatra (Chaitra masa – Pushya nakshatra, which fell on 30 April 2020), in front of the Rama idol worshipped by Tyagaraja at Varagappaiyyar lane in Tanjavur.

I was hoping to bring out all this glory, but as they say, God finds the right time to execute our plans. Well, He also gave me a solution on how to go about it!

I have never understood what social media is all about. While apps like WhatsApp have become an important means of communication, I have always looked at Facebook as a means to fritter away time. YouTube still has some useful content to refer, while sucking up energy and time. I didn’t know Instagram existed until my niece Madhuvanthi Badri (also one of the trustees), threw some light on it, when I happened to discuss my plans with her.

The possibility of a musical offering performed live through a social networking site excited me. It was startling to know that people from different geographical locations could go live over a social platform for this purpose!

It was decided that the four girls—Madhuvanthi Badri (Chennai), Krithika Vika  (Tanjavur), Swetha Ramarathnam and Archanashree P. (Coimbatore) would sing one kshetra pancharatnam each through Marabu Foundation’s Facebook page on 30 April 2020. Due to certain technical shortcomings we decided on this format.

In the meanwhile, I had discussions with S. Vijeyajeya, who heads the Department of Music at PSG College of Arts in Coimbatore. One of the senior disciples of Chandrasekhara Bhagavatar of Pandanallur was to perform on 25 April 2020 for Syama Sastry day at the Bangaru Kamakshi Amman Temple. With the lockdown situation at hand, we pitched the idea of her performing online. She in turn suggested we do a similar homage like the one planned for Tyagaraja and roped in the four girls to join her in singing the gems of Syama Sastry. In no time, a video conference call had us deciding the kritis to be sung.

I took rapid lessons from the girls on how to download and install the apps; that seemed more nerve wracking than the process of planning the event itself! On hearing these developments, Kunjithapatham Iyer, the Mudraadhikari of Kanchi Kamakoti Peetham for Tanjavur, who helps in arranging Syama Sastry’s janma nakshatra programme year after year choked, “This year, I thought we had to be satisfied with the offering of a few flowers and neivedyam to Syama Sastry’s portrait at the temple, but it was Her will which made the programme possible in this unimaginable period.” Vishaka Hari, who supports our Syama Sastry programme, was overjoyed with the developments. Auditor Sundar of Chennai, instrumental in executing this programme, was equally elated.

The days that followed comprised constant rehearsals, creating the invitation, and giving me tutorials on how Facebook live sessions work, over video conferencing. Vijeyajeya was as anxious as I was—like new recruits learning the ins and the outs! The fascinating idea of connecting to the world from the comfort of our homes was finally coming together.

On 25 and 30 April, it was extremely gratifying to witness them all singing so soulfully for the two saints. I had requested them to feel the aura of Bangaru Kamakshi Amman in the ambience of the temple, which they brought out with their bhava-laden singing. The kshetra pancharatnas were all rendered with equal devotion. As much as I did miss the satisfaction of all this happening in Tanjavur, I couldn’t have asked for something better with thousands of people getting together to pay their respects to the great saints.

It is heartening to see so many artists perform every other day in the online sphere and even more heartening to see unprecedented viewership for the same. It does look like the way forward until things return to normalcy. Also, it has got many like me to embrace the social networking world with open arms— with a cheer!

(The author is a veteran musicologist and academician)