Madras-Chennai is the city where thousands of artists— musicians, dancers, and those pursuing the allied arts have made their home. Artists come from far and near to participate in the city’s unique music and dance season to get noticed, and to earn name and fame. If one gets a foothold in Chennai, the general perception is that the “artist has arrived”! 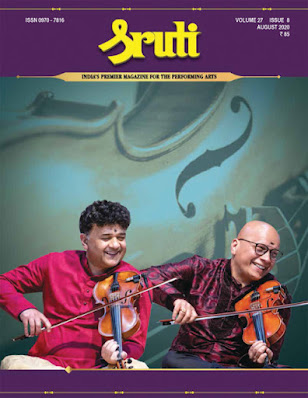 The metropolis is rightly described as the “cultural capital” of the country. It is an ancient place, no doubt, but the modern city came into being on 22 August 1639, and the day has long been celebrated as Madras/Chennai Day. Sruti, on its part, brings to you an interesting article about musicians, dancers and patrons of yore in the city of Madras; written by the stalwart Indologist and scholar, the late Dr. V. Raghavan whose birthday coincides with the founding day of Chennai city.

Have you tried to appreciate music for music’s sake without the trappings of lyrics and language? Can we not enjoy the nada emanating from musical instruments—the sounds of music itself with their inherent emotions, colours and flavours as envisaged by the person creating them? Does the audience stand in the way of allowing each musical instrument to develop a “voice” of its own by expecting instrumentalists to replicate the human voice? This is not a\ debate on sangeeta and sahitya but an exploration to tap the full potential of musical instruments. You could find some answers in our cover story on the brilliant violin duo Ganesh and Kumaresh, who have been in the field for over four decades. Their technical virtuosity, amazing manodharma, and penchant for the unusual, is well known. The brothers nudge one another to scale peaks in violin playing as they seek to explore and present the “voice” of the violin rather than reproduce the singing voice! In their quest for “pure” music they have charted a new course in the playing, understanding and appreciation of instrumental music.

In connection with the violin, it is a matter of pride that Indian craftsmen—three from Kerala and one from Tamil Nadu—have recently achieved a milestone in crafting handmade models of the Italian Stradivarius violin in India. This commendable initiative towards self-reliance, combined with quality, in crafting and repair has been made possible through the combined efforts of the Lalgudi Trust and well known violin maker James Wimmer, through workshops conducted over several years. A major breakthrough indeed!

There is an interesting story too about the Kerala based octogenarian nagaswaram vidwan, Tiruvizha Jayasankar, who has carved a niche for himself and the mangala vadyam through his innovative approach and collaborations with famous tavil maestros.

A peep into the past reveals the good and bad times faced by the devadasis who travelled from Tanjavur to Baroda around the 1880s, and their descendants who live there.

Besides our news reports and reviews, we present the second article in the saptaswara devata series by S. Rajam his visualisation of the Shadja.

Every year, this is the time when the Carnatic music field would be agog with excitement on the announcement of the Sangita Kalanidhi designate of the Madras Music Academy. This year seems to be a time to “wait and watch” as the Academy is maintaining a low profile during the lockdown. Will there be an online season? Meanwhile, music lovers continue to speculate—could the Kalanidhi be an instrumentalist this time? We await the choice as a welcome diversion for discussions during the long-drawn pandemic. It will be a bonanza for rasikas if the Music Academy can stream concerts of artists of the golden era from its archives from time to time during the lockdown.