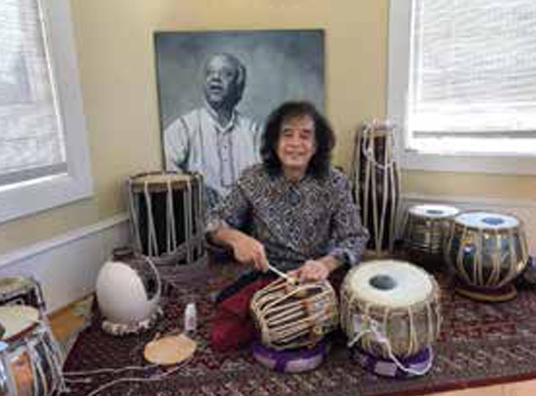 It has been three months since the last “live” music and dance concerts were held; yet the deluge of online performances streamed live on various platforms, or recorded in isolation, then streamed live, are in thousands.

There are differing views on this phenomenon—seasoned listeners are grateful for an opportunity to listen to their favourite stars online. “Earlier, where did I get the chance to peek into Ustad Zakir Hussain’s home in California and see him playing in his drawing room live!” said an excited fan. (The tabla wizard periodically goes live on his Instagram account, sometimes even live jamming with other musicians in other cities; a recent interaction with Anantha R. Krishnan on the mridangam in Chennai, was thrillingly racy.)

Shilpi Ravi who listens with as much enjoyment to Carnatic as well as north Indian music confessed, “There is so much music, starting from 9 am till the night, one has to literally make time for household chores. Every day Durga Jasraj’s Utsav interactions with artists followed by a live concert by the same artist are a must for me, as are the morning Carnatic music broadcast by the Mani Krishnaswami Academy. One day, I was glued to my screen the whole day during the weeklong Spic Macay annual online convention where there was music, a talk, yoga, a film.” Indeed, Spic Macay’s successful attempt to replicate their annual weeklong immersive festival was impressive—the interaction with doyens like Padma Subrahmanyam, Chitra Visweswaran, Dr. Karan Singh of note. The all-night music concerts ended as always at dawn with the vocal dhrupad of Wasifuddin Dagar who represents the oldest performing line of classical musicians pan India, being the 20th generation in an unbroken line of musicians.

On the other hand, the erratic internet connections make the listening experience of live concerts a disturbed one, with connection interruptions, lag in transmission and bad sound. There are many who prefer to listen to the concerts uploaded, amongst others by NCPA, Sangeet Natak Akademi, Prasar Bharati and the YouTube channels of popular artists which are now being updated regularly. NCPA’s broadcast of a recent dance performance by the inimitable Malavika Sarukkai and a themed concert by Ulhas Kashalkar titled Bandish focusing on great compositions by stalwarts like Anant Manohar Joshi and Ratanjankar stand out amongst the many interesting performances.

The issue of listening to music at home is also a controversial one. Vidushi Sudha Ragunathan cautioned: “People should not get so comfortable listening to a concert at home; you can stop, listen, then come back to it, like watching a movie …. is that really what we want? Complacency in the audience should not set in. There is a surfeit of online concerts I feel, leading to impatience amongst listeners, not wanting to wait for the artist to warm up and get into the zone—singing zone or connecting zone—whatever you want to call it.”

Organisers are a worried lot—the audiences they have so assiduously built over the years may find it easier to just settle for online concerts at home instead of making the effort of first buying tickets, then reaching a concert venue, and maybe having to wait to hear your favourite artist. Since there are so many free online concerts (on an average of 6-8 concerts daily, even more over the weekend), one may even be saturated in the next few months! Dr. Sathish Kumar of Rajalakshmi Fine Arts, which has been hosting concerts in Coimbatore and parts of the UAE for several years, enunciated in no uncertain terms: “Online concerts… disaster in the long run.” Tejendra Narayan Mazumdar who hosts the massive Swar Samrat Festival in Kolkata every year says: “I have mixed views on online concerts; but in no way feel they will present a threat to the real experience which simply cannot be replicated. Someone who loves the thrill of a live concert experience cannot be satisfied by the online experience, however many months we have to make do with them.”

Popular Carnatic duo Ranjani Gayatri give the artists’ perspective which is, “We are waiting to perform to a live audience but in the interim, will be sharing our music online”. North Indian diva Kaushiki Chakravorty has resisted offers to perform online but admitted she will be singing online soon as there seems to be no immediate end to the current isolation we are stuck in.

The other factor at play is the commercial one—nearly all the online fare on offer is available free and neither are the artists paid their full fees. Some get paid token expenses which is going to be a problematic issue once concerts start. Without a doubt, the audience at a well-known online festival like the HCL Concerts (two or three concerts a week for the past few months, and slated to continue) or Mahesh Kale’s California based ICMA Foundation with its weekend concerts is larger than a medium sized under-1000-seater auditorium, with the added ability to hear the concert any time from the organiser’s website, taking the number of listeners into thousands. As such, online audiences of established\ virtual concert organisers are a powerful force; leading one to wonder why organisers assume that their platform is needed by an artist without concerts, and that artists should be available to them without payment? Costs involved in a virtual concert cannot compare with the costs of a real concert with advertising, venue booking and sound system to name just the essentials.

Of course, one must remember there are literally hundreds of artists who want and need the visibility online even without the fees, hoping that the exposure will translate into an audience when the time comes.

Kshitij Mathur who has just hosted an online weeklong Young String Festival opined: “Artists who are so impatient to go live every day on social media are ruining their own market. As an organiser why would I pay such an artist once things go back to normal? The audience has already heard his music several times over!”

Indeed, the Young String Festival was noteworthy in many ways. The 16 instrumentalists from all over India were young—none was above 35 years, and the youngest at 11 years was Kolkata based seventh generation sarangi player Amaan Hussain who held his own with an excellently rendered raga Sri, played with aplomb. Additionally, many of the performers were new to even seasoned listeners and included the excellent sarangi performer from Delhi, Kirana gharana’s Mudassir Khan, guitarist Shahnawaz Ahmed and sitarist Rishabh Rikhiram. Some of the artists played without any accompaniment, confining their recitals to the precomposition section of alap jod jhala / ragam tanam—sarodists Indrayuddh Majumder, Australia based Praashekh Borkar and Pratik Shrivastav, sitarist Soumitra Thakur, Carnatic veena exponent Ramana Balachandran and Abhay Nayampally on the guitar and violinist Yadnesh Raikar impressed. Others like the dazzling Mehtab Ali Niazi on the sitar had his brother accompany him on the table during his rendering of raga Suddha Kalyan; as did the very dexterous and impressive Satyendra Singh Solanki on the santoor, with his able brother Ramendra Singh on the tabla. Seasoned violinists Ragini Shankar and Manas Kumar expectedly, were a delight. Since the concerts were recorded earlier by the artists at home, Kshitij Mathur was able to ensure none of the ragas were repeated, which added to the appeal of the festival.

Another novelty thrown up in Covid 19 times has been musical collaborations. Many artists have united through music; though in their different lockdown zones, their musical offerings have been collated together to create pieces of music. These have usually been to raise awareness or raise funds for a cause. The first of these was Dharti Ma in April to offer gratitude to Mother Earth, followed by many others including maestro L. Subramaniam’s Vasudaiva Kutumbakam with stalwarts like Jasraj, Yesudas, Parween Sultana amongst others, musically interacting with the London Symphony orchestra. Another interesting song was by Sudha Ragunathan entitled Maitreem Bhajata with 47 singers. Mysore Manjunath has recently launched Life Again with musicians from several countries. The latest collaborative venture was entitled Raga for Healing conceived by Purbayan Chatterji with, amongst many others, musicians Bombay Jayashri, Rashid Khan interestingly accompanied on the guitar by his son Armaan, U. Rajesh, and Kaushiki Chakraborty singing with her young son Rishith accompanying her on the tabla.

Despite all on offer, one is eagerly waiting for pre-virus safe times to come back. As Sudha Ragunathan puts it: “Online concerts are just a makeshift arrangement to connect the audience and the artist, the [actual] live experience with the energy, visible body language where you can feel the love and energy, is a totally different feeling that cannot be replicated”.

(Writes on music, musicians and matters of music)
Posted by Sruti Magazine at Monday, August 03, 2020