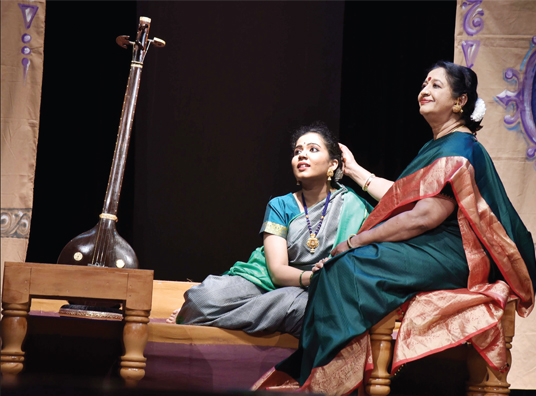 Tribhuvanae ae ae ae, as you listen to the Mukunda Mala stotra sung by Bengaluru Nagarathnamma, you observe an older way of singing. It is at a higher octave, the lines are sharply cut, there is less gamaka and the singing is stronger. Composer Pusthakam Ramaa begins the play, Vidyasundari Bengaluru Nagarathnamma, on the same note, but with softer continuity of lines, adding more body with gamakas reflecting contemporary Carnatic music. The play on Bengaluru Nagarathnamma was premiered on 27 December 2019, at Chowdiah Memorial Hall in Bengaluru.

The opening scene depicts the samadhi of Tyagaraja, with the two groups of Peria Katchi and Chinna Katchi squabbling over the conduct of the saint’s aradhana. Bengaluru Nagarathnamma enters with several devadasis and decides to conduct the aradhana on her own. Young Bannibai (who went on to become a Harikatha legend), adopted by Nagarathnamma, is introduced and the crowd flocks to listen to her at the aradhana. However, the event is cut short by a fire started by a jealous miscreant.

Vidyasundari Bengaluru Nagarathnamma, a musical play produced by the Sangeeta Sambhrama Trust in Kannada with Tamil and Telugu (also English) dialogues, was directed by the award-winning theatre and movie director Nagabharana; with music composition by Pusthakam Ramaa. The play draws inspiration from Sriram V’s book The Devadasi and the Saint: The Life and Times of Bengaluru Nagarathnamma, and the Kannada novel Vidyasundari by Maleyuru Guruswamy. The text for the play has been adapted by Prathibha Nandakumar and Hooli Sekhar.

It was a fast-moving play showcasing several events: The life of young Nagarathna in Nanjanagudu near Mysore, her education, training in music, her mother Puttalakshamma falling into penury, their move to Bengaluru, the death of Nagarathna’s mother, and her musical prowess were well enacted. Nagarathna meets judge Narahari Rao who becomes pivotal role in her rise. The role of the Dewan was played by Pulikeshi Kasturi who was also the choreographer of the play. Interesting were the scenes unfolding the building of a house for Nagarathna on a small hillock that Narahari named Mount Joy, which came to be known as Narahari Raya’s gudda, the breakup of the couple, and their reunion heightened by Nagarathna singing the javali Matada barade (won’t you talk to me?) addressed to him. The roles of young Nagarathna and Narahari were played by Ananya Bhat and Nitin with sweetness and gusto.

Nagarathnamma’s move to Madras and her friendship with Veena Dhanammal (Nagini Bharana), becoming wealthy and building a bungalow, inviting her guru Bidaram Krishnappa to sing Kannada songs in Madras, her sweetness and coyness giving way to confidence and strength (acted with authority by Deepthi Srinath) were all portrayed with conviction. The receipt of a letter from Bidaram Krishnappa (Vageesh Krishna), Nagarathnamma’s first visit to Tyagaraja’s samadhi in Tiruvaiyuru which she cleans up on finding it in a state of disarray, how she sells her jewellery and her house to build Tyagaraja’s samadhi (she exchanges fertile land for the barren to construct it) and Nagarathnamma’s final resting place in front of the samadhi—the scenes narrated in Harikatha style with a chorus connecting them, with great music, were gripping. P. Ramaa played a dignified senior Nagarathnamma.

Some artistic license seems to have been taken in the depiction of the friendship between Nagarathnamma and Veena Dhanammal. Was Dhanammal present when  Nagarathnamma went to Tyagaraja’s samadhi for the first time? Did she dance? The well known humorous side of Nagarathnamma could also have been highlighted. There were some glitches in the malfunctioning of the sets, which can easily be corrected in future presentations.

The play combined drama, dance and music with interesting production values that enhanced the narrative. One hopes it will have a long run, with many presentations, as it tells the story of a woman extraordinare.