To Guruji, With Love 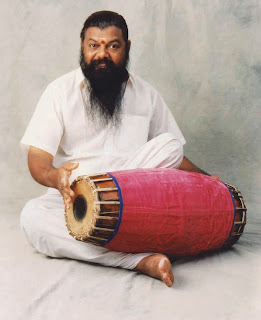 The root of meditation is the form of the Guru

The root of worship is the feet of the Guru

The root of mantra is the word of the Guru

The root of liberation is the grace of the Guru

To my beloved guru, Karaikudi Mani sir: my most humble pranams to you on your 75th birthday.

As one of the most revered mridangists of all time, he is: a transcendent musician whose rhythm has reached and influenced all corners of the globe.

Watching him play is akin to watching someone who has completely mastered their craft. With a style of playing so distinct, nuanced, and majestic, he elevates a concert so seamlessly. Every performance of his is a completely cathartic listening experience, and a listener is filled with an indescribable sphere of energy afterwards.

I started learning from guruji when I was 15. As I vividly recall, sitting down in my first class with him was as though my life’s wishes in music had been fulfilled. He was my musical hero, someone I had drawn inspiration from for years. Since then, I have watched him teach for hours at a stretch, spontaneously creating unique korvais and patterns with his ever-flowing fountain of creativity. His compositions reflect his deep musical intellect and remind us to break barriers in the world of percussion, where exploration is eternal.

Classes were an exercise in hard work, perseverance, and discipline, interwoven with invaluable lessons applicable to the real world, from the do’s and don’ts of life to core values of human dignity. At the same time, the more light-hearted moments outside of the teaching realm were equally special: hearing him reminisce about some of his most memorable concerts, joining him in prayer at various temples, and of course, eating his idli-sambar made from scratch.

Additionally, his U.S. tour in 2018 marked a series of truly unforgettable memories I have shared with him. I stayed by his side in Cleveland, New York, and New Jersey, and had the ultimate blessing of performing with him on stage. Being his sishya, few things mean more to me than expressing my gratitude through seva.

Mani sir’s life has been one dedicated to paying homage to this rich art form through unwavering determination. And though the weight of his legacy and lineage is heavy, it is one that I — along with all his students — feel privileged to carry forward.

Happiest of birthdays, guruji. May we continue to be recipients of your grace, and selflessly share this knowledge and wisdom with others as you have shown us.