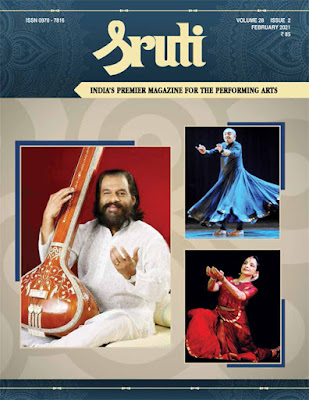 Every year, on the eve of Republic Day, the Padma Awards—among the highest civilian awards of the nation, are announced by the Government of India in three categories— Padma Vibhushan, Padma Bhushan, and Padma Shri. Given to eminent personalities who have made a mark in their respective disciplines, we eagerly await the list of artists selected to receive the awards in the field of performing arts. Last year we bemoaned the fact that the awards were conferred on very few classical musicians and dancers. This year it’s no better; the number has shrunk further! Out of the 119 Padma awardees, the selected artists can be counted on your fingers. There is no dearth of highly distinguished top performing artists in the country—one wonders why they are not being considered for these prestigious awards? Classical dancers don’t figure in this year’s list. Moreover, there are several veteran artists like Vyjayantimala Bali, Kalamandala  Gopi, Sudharani Raghupathy, Chitra Visweswaran—to name only a few (there are many more in different genres) who were conferred the Padma Shri decades ago and have continued to enrich the art form, but have not been bestowed the higher awards! All this talk about promoting our rich cultural heritage seems like lip service if the government does not recognize deserving art practitioners in time.

This year, the famous singer S.P. Balasubrahmanyam has been selected to receive the coveted Padma Vibhushan. He certainly deserves it, but it is a pity that he is being honoured posthumously. In this month’s issue, musician Anil Srinivasan pays tribute to this singer whose hallmark was ‘versatility with humility’.

It is a matter of some consolation that the Padma Shri is being conferred on a few artists. Two veterans—Carnatic violinist Annavarapu Ramaswamy and Subbu Arumugam who helped revitalise villupaattu, are also being conferred the Padma Shri; they deserve a higher award. Senior mridangist Nidumolu Sumathi and star vocalist Bombay Jayashri are also among the awardees. It is heartening that several folk artists in different parts of the country are also being honoured. British theatre director Peter Brook and musicologist Sanjida Khatun from Bangladesh are among the foreigners chosen for the award. Sruti congratulates all the awardees and hopes the Padma awards list will be more inclusive and extensive next year.

The Sruti cover stories in February focus on three famous exponents who have courageously pursued their passion for the arts. K.J. Yesudas, the man with the “golden voice”, has entered his eighties. Famous in the music field film, devotional and classical music—he has drawn countless music enthusiasts to Carnatic music. Lata Pada’s life is a lesson for many—she immersed herself in dance to overcome shattering personal loss to become an acclaimed dancer, choreographer, and teacher in Toronto. Art has been her solace and healer. She and her Sampradaya Dance Creations are ‘sector leaders’ for Indian dance in Canada. In the passing away of Astad Deboo, India has lost a pioneer in the field of contemporary dance. He ploughed a lone furrow, as his personal dance style defied categorisation; thereby denying him due recognition. Unfazed, he plodded on his adventurous pursuit of his art, using it also to help the less fortunate in society.

We also bring to you the first part of the Chennai season coverage. Concerts were webstreamed from mid-December every day. Of course, this time our reviewers had the luxury of watching them virtually from home. Like the ‘live’ season, this too posed the problem of plenty. Happy reading!