Analysis of the Kharaharapriya pada varnam of vidwan M. Balamuralikrishna

A pada varnam composed by vidwan M. Balamuralikrishna in the 22nd melakartha raga, Kharaharapriya has great richness in the Telugu literature and this composition  narrates the the events that happened according to the Ganesa Purana. The beauty of this particular composition is the rhyming word sequences that occur in the stanzas, and also a single word being used at multiple places for conveying different meanings. The varnam was not composed entirely at once. First Balamuralikrishna composed the pallavi, anupallavi and ettugada, later, he added chittaswara sahityam and then kept adding the charanams to it, and he rendered this during a concert in Chennai in the year 1999.

The six-stanza varnam starts with the pallavi, Ninnu nera nammithi Gananayaka, nata jana vighna vinaashana. The composer says that he has a great faith on the Lord Ganesa who is always engaged in eliminating the obstacles of his devotees. The composer has inscribed his signature/mudhra in the anupallavi, and it rhymes at end of the each phrase perfectly; Muni gana pranuta, mangala charita, Murali Krishna sahodari sutha.  The composer describes Lord Ganesa as being praised by the holy sages, with an auspicious history and the son of the sister of Murali Krishna;  Goddess Parvathi,  sister of Lord Vishnu. In order to inscribe his signature, the composer describes the incarnation of Vishnu in the form of Krishna who holds flute (Murali) in his hand.

The chittaswara sahityam describes an important incident in the Ganesa Purana. The moon, which adorns the head of Lord Siva laughs at Ganesha on the sacred Chaturthi day, when Ganesa with his stomach full is unable to bow and offer his prayers to his parents Siva and Parvathi. In order to suppress his ego, Ganesa curses the moon that whoever person sees the moon will face unnecessary blames and undeserved defames. Having realised his mistake, Chandra (moon) surrenders to the feet of Ganesa. The Lord retracts the curse, but says that a person who will see the moon on the Ganesa Chaturthi without worshipping him will have to face the undeserved blames!

The ettugada pallavi continues at end of each stanza. The composer describes Lord Ganesa as Sumukhaa paavana, sritha sumukha, meaning, the lord is holy and handsome and is agreeable to his devotees. The first Sumukha refers to describe the handsomeness of the Lord and in Telugu, the word Sumukha means accept, agree or to make a nod.

In the first stanza, the composer says that he trusts the feet of the Lord. In the second stanza the composer says that Naraadi vinuta pada vaarana mukha, bhaya vaarana vara guna daana vitarana.  Lord Ganesa, with an elephant face, whose feet is worshipped by the humans, is the remover of fear, and has the noble character as he showers his blessings liberally. Once can see rhyming word at end of each phrase, and also the word Varana is being used at two places. It is used as a synonym for an elephant in the first place, and in the second place it is used as a synonym for removing/eliminating. In the third stanza, the composer feels grateful to the Lord and says that he feels blissful by reading the glorious history of Ganesa and asks him to forgive the sins committed knowingly or unknowingly and to transform him into a noble/kind hearted person.

The first three stanzas describe the qualities of Lord Ganesa and the wishes made by the composer on behalf of the devotees. The last three stanzas describe the incidents that happened according to the Ganesa Purana. In the fourth stanza, the composer says that Ganesa took the form of a bird and killed three demons that were in the form of a tree, a net and a human, thereby bringing peace and prosperity to earth. In the fifth stanza, he describes how Lord Ganesa suppressed the demon Durasara. Durasara was a greedy demon, who attempted to invade and conquer the holy city of Varanasi. At first, Ganesa took the form of a dwarf, and then expanded himself to full strength, killed the demon by crushing his head with one foot, and spread the second foot as an umbrella over the entire city of Varanasi and hence established peace. Finally, the composer says that Ninu pogada mementha – we humans are meagre people to sing in praise of you. There are continuous rhyming words that come one after the other in this stanza such as Varanasi nakraminchina durasaruni durasa nirasa gavimpa. Here, duraasa means greed, and niraasa means sorrow. There is an underlying message being conveyed that too much of greed will always lead to sorrow.

The sixth and final stanza, and the largest of all, describes how Lord Ganesa acquired the leadership of the ganas. There is a story where the ganas, the servants of Lord Siva ask him to appoint a leader for them. Then, Lord Siva calls upon his two sons Ganesa and Muruga (Karthikeya) and conducts a test that whoever goes around the entire universe and takes a dip in all the holy water bodies and returns first, will be assigned the leadership. Muruga heads out on his peacock. Ganesa, unable to move fast, recognises that the entire universe is dependent on his parents, and hence goes around them, and thus wins the test.

This composition is unique since no other varnam describes the glory of Lord Ganesa in such an elaborative manner.

Posted by Sruti Magazine at Tuesday, February 23, 2021 No comments: 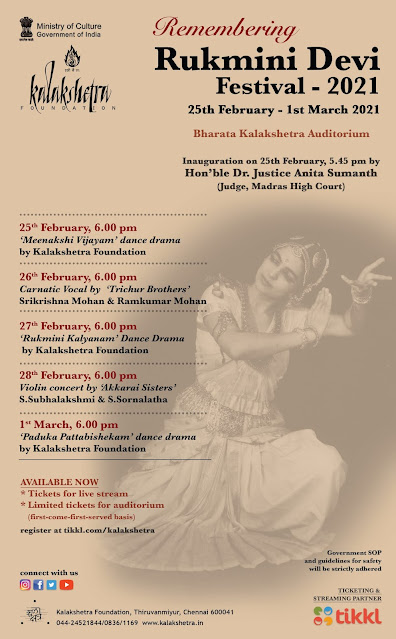 Posted by Sruti Magazine at Wednesday, February 17, 2021 No comments:

THE TRADITION CONTINUES UNABATED DURING THE PANDEMIC

Last season, I attended more than 100 concerts live. This year, I viewed all the online concerts hosted by the Madras Music Academy, Mudhra and sporadically by other sabhas.

The Academy’s eight-day festival was inaugurated on 24 December 2020, by Roshni Nadar Malhotra, Chairperson HCL Technologies. There were 27 slots in total—15 senior slots of 90 minutes duration and 12 junior and sub senior slots of 60 minutes duration. The packaging of the concert for the contrived duration was challenging for the musicians, but over all, everyone strived to give a complete concert experience in the abridged slot.

The inaugural nagaswaram concert at the Academy was by Semponnarkoil SRGS Mohandas, supported by Mylai K. Selvam. Rameswaram T.B. Radhakrishnan and Swamimalai Gurunathan ably accompanied them on the tavil. Their Kharaharapiya (Rama nee samanamevaru) and Bahudari (Sadananda tandavam), with a series of ragamalika swaras were refreshing and the percussion artists added colour and gusto to the concert. Sree Ganapatini in Saurashtram and Annapoorne Visalakshi in Sama were rendered in the first half of the concert. While there had been criticism in earlier years that the nagaswaram artists were seated on the stage floor, this was rectified this season and the artists were seated on the erected dais.

Posted by Sruti Magazine at Thursday, February 11, 2021 No comments: