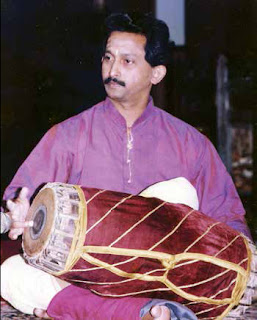 Senior mridangist J. Vaidhyanathan believes his commitment to accompaniment begins right from arriving well on time for the concert. “A concert is like a yagna, a lot of effort—we should not cause any consternation to either the organiser or the artists—rather, we should ensure that we do whatever we can to keep them calm, thus ensuring the best output from the artists. Also, regardless of who the artist is or his/her seniority levels, everyone should be treated on an equal footing on stage,” says Vaidhyanathan.

The youngest of three children, Vaidhyanathan was born to Sangita Kalanidhi D.K. Jayaraman and his wife J. Jayalakshmi on 22 April 1965 in Damal, near Kanchipuram in Tamil Nadu. The family moved to Chennai a few years after his birth. His aunt Sangita Kalanidhi D.K. Pattammal, a colossus in Carnatic music, was already in Chennai. Music, thus, was the most  natural foray for Vaidhyanathan.

His elder brother Srivatsan did not pursue music but is a knowledgeable rasika. Sister C. Sukanya is a vocalist who accompanied her father regularly and performs and continues to teach. Wife Poorna, who has a doctorate in Music, is working as a violin lecturer since 2005 at S.V. College of Music and Dance run by TTD in Tirupati. Like Vaidhyanathan’s mother, Poorna too has been a quiet pillar of support in his musical career. “She is very meticulous, especially in organising my things when I have to travel. I do not have to worry about anything and can concentrate on my mridangam playing. We also discuss a lot about music. She is an excellent teacher who has trained beginners in music to rise to the level of gold medallists,” says JV as he is popularly known.

As Jayaraman taught his students, he noticed the toddler Vaidhi constantly tapping to perfect tala with his fingers. Noticing the child’s affinity for rhythm, Jayaraman decided to start him on mridangam. Little Vaidhi was initiated into ‘ta dhi tom nam’ by the stalwart Sangita Kalanidhi Palghat Mani Iyer. Given his prolific travel schedules, Mani Iyer suggested to Jayaraman that the child continue to learn from his senior disciple Palghat Kunjumani. Vaidhi also learned from Srinivasan (another disciple of Palghat Mani Iyer), Dindigul Ramamurthy and Tanjavur Ramadas. While learning from Ramamurthy and Ramadas, Vaidhyanathan won the junior scholarship from the Government of India. In 1985, when it was time to apply for the senior scholarship, he enrolled with mridangam stalwart Sangita Kalanidhi T.K. Murthy, who was an A-Top grade artist.