In every generation, there come one or two superlative musicians who dominate the musical landscape during their time. In north Indian classical music, in the generations preceding ours – in the field of sarod, it was Amjad Ali Khan in the 1980s and 90s, indeed till today; before him it was Ali Akbar Khan from the 50s to the 70s. In vocal music, till the 1940s it was Fayyaz Khan, followed a decade later by Bade Ghulam Ali Khan and Kesar Bai, then Amir Khan and Kumar Gandharva, followed by Bhimsen Joshi, and lately, Kishori Amonkar and Jasraj.

In the world of tabla, the golden trinity -- Samta Prasad, Alla Rakha and Kishan Maharaj gave way to Zakir Hussain. Amongst sitariyas, Vilayat Khan and  Ravi Shankar  were followed by Shahid Parvez and Shujaat Khan; this cycle continues.

Today, with the advent of social media platforms for the dissemination of classical music, to discern who is going to rule the concert platforms in the next few years is harder to ascertain. There are also many more practitioners whose art is available to music lovers. Despite this, one can perhaps predict some from the younger generation of musicians, who will emphatically come into their own in the following decade. 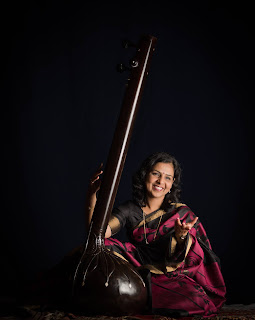 Manjusha Patil (born 1971), is already amongst the top ten Hindustani  vocalists today. Acknowledged as a talent to look out for, she was awarded the Central Sangeet Natak Akademi Yuva Puraskar in 2012, and the coveted  Kumar Gandharva award in 2016, among other accolades. A self-made singer, who has had three gurus, Manjusha has a well-honed,  highly-practised voice that soars with ease in three octaves; an ever expanding repertoire, an ability to move between vocal forms with seamless ease -- her abhangs are as polished as her vilambit khayal or emotive thumri.

Manjusha’s journey started in her pre-teens. Born in the rich musical town of Sangli, Maharashtra, her talent was quickly spotted even as a child, and she was sent to the best singer in Sangli, Chintubua Mhaiskar. She started performing at a very young age, and was noticed on stage by her next guru, D.V. Kanebua, who lived in the nearby town of Icchalkaranji. She would spend the weekends with her guru, and would practise what she was taught during the week, after school. This continued for twelve long years.

Kanebua was an unusually erudite singer -- initially trained in the Gwalior gharana gayaki, he had also learnt in the Agra style from Vilayat Hussain Khan. His prowess in natya sangeet was well-known. He laid a solid music foundation for Manjusha, from which she could soar, taking guidance from other seniors like Shubhada Paradkar, Vikas Kashalkar and finally his star brother,  Ulhas Kashalkar from whom Manjusha continues to learn. Her innate interest in thumri led her also to pursue the craft from Narendra Kanekar. She is equally popular for her abhangs, which she honed under Kanebua who had learnt from none other than the great Bal Gandharva himself.

Manjusha realises that this decade is an important one; she shared that in 2015, after she had the honour to be accompanied on the tabla by Zakir Hussain. It was a golden moment for her, and intensified her focus.

Satyajit Talwalkar is hailed as one of the finest tabla players of his generation. Born in 1978, he has been playing solo and accompanying concerts for the last 25 years. Son and disciple of  Suresh Talwalkar and acclaimed vocalist Padma Talwalkar, Satyajit started his musical training as a toddler and impressively played his first solo concert at the age of nine. 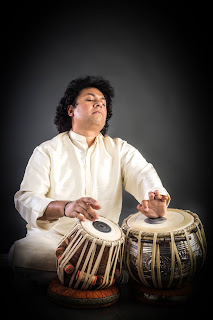 Today, creditably he has accompanied several musicians of an earlier generation including Amjad Ali Khan, Hariprasad Chaurasia, Shiv Kumar Sharma and Jasraj. He was awarded the Central Sangeet Natak Akademi Yuva Puraskar in 2011 as a recognition of his undoubtable mastery on the tabla. Today Satyajit is a much sought after accompanist. His musical approach in accompaniment is no doubt a result of his training under his vocalist mother, but father  Suresh Talwalkar too has always included vocal music very prominently in his solo acts, making it a part of the presentation. In fact, having the voice accompany the tabla is an innovation derived from his acknowledgement that laya is incomplete without swara. His solos are thrilling, innovative and executed with a crisp mastery that is breathtaking, and one expects to hear much more of Satyajit in the coming years.

Like other percussionists of his generation, Satyajit too has dabbled in experimental music with percussionists from other genres, and jazz musicians. 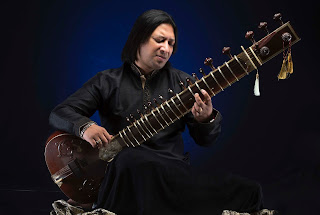 Sitariya Shakir Khan (born 1982) is an eighth generation practitioner of the sitar; in his family, in his generation he is the only concert playing “sitariya”. He is the son of sitar maestro Shahid Parvez, great grandson of the surbahar playing Wahid Khan and great great grandson of  Imdad Khan, the founder of the gharana. Regarded as the premier sitar playing gharana of India, the Imdadkhani gharana, has, in the last 100 years produced the finest sitariyas in each generation, from Imdad Khan, Inayat Khan, Vilayat Khan and Shakir’s own father,  Shahid Parvez Khan. Shakir played his first concert at the age of eleven. As yet his undeniable talent is relatively unacknowledged, with very few awards to his credit, but his popularity and credibility as a performer are there for all to see. His recitals are polished, redolent with expertly executed movements. Holding a masters degree in music, Shakir is following in his father’s footsteps in keeping his family’s tradition alive, and teaches in the gurukul system at their ashram called Swara Setu in Pune, which has around 100 students.

What stands out in Shakir is his openness as a musician; most younger musicians hesitate to communicate with other older artists on stage.  Laudably, Shakir has played jugalbandis with north Indian vocalists and instrumentalists, including Mewati gharana vocalist  Sanjeev Abhyankar. 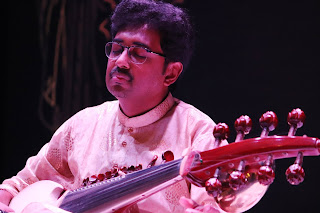 Abhishek Lahiri (born 1983) is fast emerging as a sarodiya to watch out for. With a training combining the three major schools of sarod playing, Abhishek perhaps has an edge over his contemporaries. His father  Alok Lahiri has received musical training from the Senia Maihar gharana (with  Shyam Ganguly, disciple of Baba Allaudin Khan), Senia Gwalior gharana (from Amjad Ali Khan) and Senia Shahjahanpur gharana (from   Budhadev Ganguly). Each school has its specialisation and it is to Abhishek’s credit that he has seamlessly integrated the different approaches assimilated by his father, while of course remaining primarily a Maihar gharana sarodiya. His integrity to raga is matched by a correctly taught unfolding of the raga, combining lyricism with the sarod baaj.

Abhishek has played in venues across the world, including at the European Parliament at Strasbourg. His albums have been nominated twice by GIMA (Global Indian Music awards) and he is already an A-grade artist with All India Radio. Described as the ‘wonder child of sarod’ in 2008, Abhishek is fast living up to expectations. He share: “I have tried to develop my own style of playing, not trying to copy anyone blindly. I feel that maintaining the integrity of the ragas is very important, and cannot be compromised. As I am an instrumentalist, I must show the special techniques of the sarod, the sarod baaj. It is not enough to only play with lyrics, where the specialities of my instrument are not exhibited. My performance should be 60 percent physical riyaaz and 40 percent thinking and introspective riyaaz. If I attempt to play exactly like a maestro of the 1960s or 1970s, I will not be able to attract a younger audience who can  listen to the greats on record.”

The coming decades promise to be interesting musically for north Indian classical music, with such talented musicians maturing into the masters of tomorrow.