The symbolism of rivers has been used abundantly in poetry, music and story-telling. Rivers depict the entire circle of life and are revered as nature’s wonders. In the Indian context, they are worshipped and humanised to tell moving stories of civilizations. However, through the generations,  excessive use of these water bodies has led to their erosion and contamination. Today, we are faced with the colossal task of restoring them and sustaining them for future generations. This is the quintessential and compelling message of the recently released music video, Rivers of India. 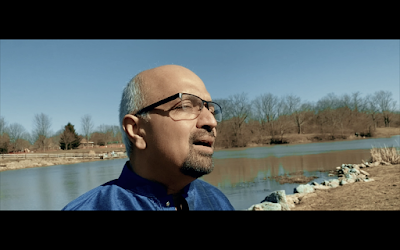 Premiered on Earth Day, 22 April 2021, Rivers of India was conceptualised and composed by Kanniks Kannikeswaran, famous Indian-American music composer, in collaboration with The Center for Clean Water (ICCW), an initiative of IIT Madras, of which he is a distinguished alumnus (2019 awardee). The 6.5 minute-long video is a breathtaking salutation to India’s rivers, with a prayer to preserve them. Not only is the video a feast for the eyes, but also pools in leading Indian classical musicians Bombay Jayashri and Kaushiki Chakraborty and their sons, who are emerging artists.

To those familiar with his work, Kanniks is a firm believer in the sovereignty of ragas to bring people and causes together. His efforts in building global choirs and musical communities have brought him a flood of accolades. As a member of one his regional choirs in the US and also a miniscule part of the choral arrangement in the Rivers of India video, I feel privileged to share the story behind this musical video, which includes the names of 51 rivers from all over India.

In February 2020, a little before the global pandemic hit, Kanniks visited The Woodlands, TX (the choir chapter I am part of) and College Station, TX. It was while working with a group of 30 amateur singers in College Station, singing his composition Gange from his flagship production, Shanti, that the idea of creating something simple, featuring the names of rivers such as Ganga and Yamuna struck him. “I immediately found myself singing the first line of the composition, finding joy just in the names of the rivers. The manner in which they fit into a seven-beat Misra chapu tala and the addition of the prefix Sri to the river Saraswati, was something that naturally fell in place”, recalls Kanniks. He completed this inspiring piece of work on his way back to his home in Cincinnati.

When Kanniks resumed online lessons with us, we were indeed delighted to be amongst the first of all his choral groups to learn the Rivers of India composition from him on Zoom soon after lockdowns were imposed. During one of our sessions, he expressed his vision to see this song performed by prominent singers in India, along the lines of the iconic Mile sur mera tumhara. Little did we know then that some of our voices would trickle into this meaningful presentation a year later alongside celebrity musicians. 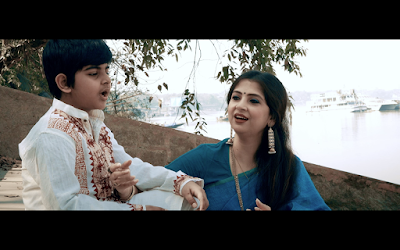 Moving along with his drift of thoughts, Kanniks reached out to his 1984 batchmate E. Nandakumar (CEO – International Center for Clean Water IIT Madras), with whom he discussed the idea of a music video. This was in continuation of a conversation they had in January 2020 during the  35th reunion of IIT Madras, where Kanniks had proposed creating a large-scale stage performance on campus, with the goal of promoting awareness about water resources. Given the changed circumstances around Covid-19, Nandakumar and Professor T. Pradeep, Director of ICCW, readily agreed to support an online production with the same theme.

The lockdowns of 2020 eroded a good part of the year, however Kanniks was determined to tide over them and make the video a reality. He reached out to Sai Shravanam, music producer/ace audio engineer in Chennai, with whom he had worked together on other projects. The two plunged into the project and came up with a deluge of ideas, from reaching out to artists, to recording and producing the music. It was an epiphany on Sai’s front that led the team to pursue the mother-son duos of Bombay Jayashri and Amruth Ramnath (Chennai), and Kaushiki Chakraborty and Rishith Desikan (Kolkata). Supporting singers Mayur Davay and Savitha Sai were added, much like the many tributaries featured in the video. The song was arranged and produced by Sai Shravanam with several layers of percussion and special effects.

Kanniks says he was excited at the prospect of working with leading artists as well as uniting the Carnatic and Hindustani streams together in one video. According to him, both Jayashri and Kaushiki perceived and internalised the central emotion of the song in its entirety - the flow and swathe of the rivers. 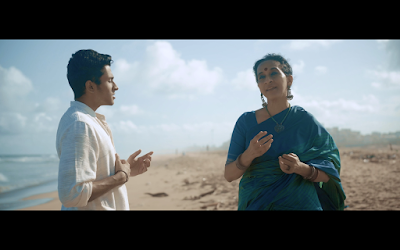 To be featured in the same video as such stalwarts was a thrilling prospect for all of us. Although spread out in different parts of the world, the 50 of us became uniformly immersed in the tune. We each sang the lone choral line, dressed in shades of blue, and shared our individual audio and video tracks with Kanniks, who programmed them into the video. Concluding recordings and edits were done by Bharat Vikram (a successful producer of several musical videos), and a trailer was released 22 March of this year. The final video was released formally on 22 April in a virtual ceremony hosted by IIT Madras.

If one were to dive deep into the composition, it can be best described as a “song that just flows”, as Kanniks states. Written in the beautiful raga Yamuna Kalyani, the piece is complete with a pallavi, anupallavi and a chorus, with the curves in the melody representing the flow of the rivers. The seven-beat cycle stands for the sapta-sindhavah (seven bodies of water revered in the Rig Veda). Yamuna Kalyani vibes with the name Yamuna that appears in the very first line. The tribute also indirectly salutes Muthuswami Dikshitar whose kriti, Jambupate in the same raga, reveres Siva’s manifestation in the form of ‘water’. The anupallavi is rich in swaraksharas; the lines rhyme with each other with alliterative alankaras such as antyakshara prasam. The Sanskrit equivalent names of rivers such as Sutlej easily glide with the tune, as do names such as Vaigai and Hooghly!

This music is not just about adulating the rivers of India. After the introductory celebration, the song makes a distinct transition into the raga Keeravani, with intense alaaps and percussive layers. At this juncture, the camera moves away from the singers and vistas of pristine waterscapes to scenes of human-induced pollution and the resultant devastation of water resources. Kanniks reiterates that he did not want the song to end in this gloom and therefore introduced a momentary pause, after which a surge of hope gushes in, with the well-known Tamil phrase from the Silappadikaram - nadanthai vazhi, juxtaposed with the Sanskrit phrase Jale asmin sannidim kuru. (You walked this land; may you be blessed; O rivers, please emerge in the water in front of me).  There is an immediate change in key and a dramatic emergence of the virtual global chorus of singers, splashes across the screen. The song comes to a climactic conclusion with images of the Center for Clean Water, the work done by them and an invitation to be part of the Clean Water initiative.

The video is nearing one lakh views within a month, and makes a statement that, the online audio-visual medium of expression is here to stay. The end result is as captivating as it is influential, in spurting out an indomitable message to preserve these invaluable resources. Lastly, intergenerational projects have a large impact. “These rivers are ours and this story needs to be told”, Kanniks pours his heart out passionately, “This is an attempt to call the rivers out by name. Knowing of their existence is a first step in creating awareness about water resources”, he expresses.

The entire project brings back for him, the memories of The Blue Jewel, a production from 1996 which he collaborated with the University of Cincinnati. “I am blown away by the relevance of the shocker images used then;  masked humans are now walking the globe – while at that time, we projected the reality of our disregard for the environment resulting in patients being treated with masks in hospitals”, he observes.  “Surely, what the world is going through is largely a result of our own callousness towards our precious resources”, he adds. The Blue Jewel touched only a few thousand people in Cincinnati, but in today’s digital world, Rivers of India is garnering a fast-growing viewership. Kanniks is soaked with gratitude for social media and complements online platforms for providing much-needed respite and sanity to music lovers in today’s turbulent times.

Talking to Kanniks is always an invigorating experience. Just like the lush waterfalls portrayed in the Rivers of India video, his mind is always overflowing with creative ideas and message-oriented themes waiting to be produced. He is particularly overjoyed to have been able to include the names of all hostels on the IIT Madras campus in this song (they are named after Indian rivers), transporting him back to his student days there. While for us, the members of his global choir, this mesmerising production has been instrumental in delivering a spate of important lessons - from water conservation, to adapting to online presentations, and finally, the names of Indian rivers.

(The author is a freelance writer and also a member of the Rivers of India choir)
Posted by Sruti Magazine at Tuesday, June 01, 2021