Efforts on to renovate Dikshitar's Mandapam in Tiruvarur 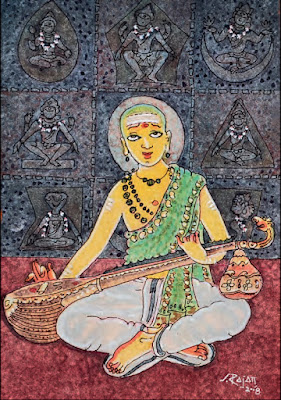 "Kamalalayil pirandaarkum Mukti” -- those born in Tiruvarur attain salvation”-- describes the greatness of the unique holy town of Tiruvarur, which is also known as Sripuram, Bhoopuram, Kamalalayam, Valmikapuram, Muchukundapuram and so on, glorifying its many-splendoured facets.

The birth of the Carnatic music trinity in this auspicious place adds further dimensions to its greatness, with its presiding deity Sri Ajapaa Natana Tyagesa moorti and Devi Kamalamba, it’s pervading gnana  sakti.

The initial establishment of a memorial for Muthuswami Dikshitar at his birth place in Tiruvarur happened in  1955, which involved the well-known local landlord, Bhikshandar Kovil G. Rajagopala Pillai and Tiruvarurite  Dr. V. Raghavan,  under the auspices of the Sangita Mummoortigal Sabha on  the instruction of the Paramacharya of the Kanchi Mutt, who visited the birthplace of Dikshitar and conducted pujas there for a period.

As per available print sources, in  1976, V. Raghavan, T. Sadasivam and local landlord V.S. Tyagaraja Mudaliar, worked on  building a new mandapam at the same venue. As they were mobilising funds for this project, a munificent donation of 1,40,000 rupees came from a native of Tanjavur, Pillaali Govindasamy Pillai, who travelled to Singapore as a youth and became a leading textile businessman there. That generous offer helped to complete the mandapam which was inaugurated  on 3 March 1977, in the presence of Govindasamy Pillai who was then 90 years old.

It is a nostalgic experience for me to recall as I was present at the morning inauguration and sang two gems of compositions of  Dikshitar, that too in the presence of M.S. Subbulakshmi, who offered a scintillating musical homage that evening.

After more than four decades, on the instruction of Sri Vijayendra Saraswati Swamigal of Kanchi Kamakoti Mutt, the renovation of  the mandapam  has been undertaken and the work has been assigned to a managing committee, under the chairmanship of Sri Karyam of the mutt and other eminent members of the city.

This noble project to commemorate one of the Carnatic music trinity has been budgeted at rupees one crore and fifty lakhs. Lovers of Carnatic music, musicians and rasikas of Dikshitar kritis, are welcome to contribute generously towards this memorial for the versatile “vainika gayaka"  Muthuswami Dikshitar, and pay their homage to the musical genius on the banks of the Cauvery.