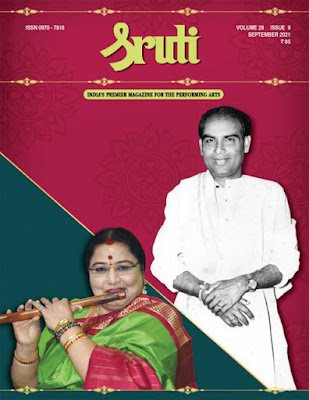 It is an indisputable fact that over the centuries, in Tamil country, the nattuvanars were the custodians of the art of Sadir-Bharatanatyam, and the devadasis its practitioners. Together they kept the practice of the art alive which flourished under the patronage of the rulers and the wealthy. The nattuvanars were well versed in music and dance, they were intelligent, progressive and smart enough to adapt themselves to changing times to keep the art alive. One such nattuvanar who gained name and fame in the 20th century—as a natyacharya, musician, choreographer, composer and vaggeyakara—was K.N. Dandayudhapani Pillai whose centenary is being celebrated through 2021 to 2022 by his disciples. In the cover story in this issue, Sruti pays tribute to this multifaceted artist who was ahead of his times. Besides the excellent art that he propagated, his major contribution is the corpus of compositions for Bharatanatyam which he has bequeathed to suit the changing times. By the 1950s, more and more children were eagerly enrolling for classical dance classes. Not only were they young, but hailing from ‘non-traditional’ backgrounds, they  had no clue about the deeper meaning of sringara, bhoga, viraha and such. As Dandayudhapani Pillai too had several such students, he wrote, tuned, published and taught innumerable compositions suitable for  young students to understand and perform. These have stood the test of time and are taught across the globe.

I happened to read a perceptive article by Dandayudhapani Pillai (published in his Natya Kalalayam school souvenir) in which he has put forth his views on Bharatanatyam. He says that the art was once in the hands of devadasis who preserved it as a treasure. But, at a particular period there existed the danger of completely losing this art and its divinity. It was found necessary that unless all sections of the people learnt this art, it would lose its glory. It is really interesting that he goes on to say that children who desire to learn Bharatanatyam are increasing in number, but the number of teachers who can impart the art in its pure form are just a few. As a result the people are baffled because they are unable to appreciate real art and unable to honour true artists. This state of affairs has to change. He wrote this in the early 1970s. Well the situation does not seem to have changed much over the decades! Has it?

The second cover story this month focusses on flautist Sikkil Mala Chandrasekhar who turned 58 last month (23 August). Immersed in music since her childhood,  on the one hand, she had the double advantage of being mentored at home by the Sikkil Sisters – her mother Neela and aunt Kunjumani. On the other, she lived in their protective shade for quite awhile and had to prove  her musical mettle as a soloist. Over the years, she has emerged as one of the top Carnatic flautists  of her generation. She is the proud torchbearer of the Sikkil Sisters’ bani – flute playing marked by precision and clarity,  combining fine technique, melody and bhava, steeped in classicism with a flair for nuanced laya wizardry.

Over the past few months, we have been offering our readers interesting facets about Lord Nataraja. From this issue we begin a series on the ‘five sabhas’  where He performed the ‘pancha kritya’ – expounded by scholar Sudha Seshayyan. We also have a thought provoking article on the prosody and origin of javali by veteran critic and writer V.A.K. Ranga Rao.

One wonders whether concert halls will open up in the near future? In the relaxations announced till date by the Tamil Nadu State Government, cinema halls are permitted with 50% occupancy. Does it apply to cultural halls too?  It would be helpful if the authorities clearly include cultural programmes too while announcing the relaxations. Let us wait and watch!

Email ThisBlogThis!Share to TwitterShare to FacebookShare to Pinterest
Labels: S.Janaki