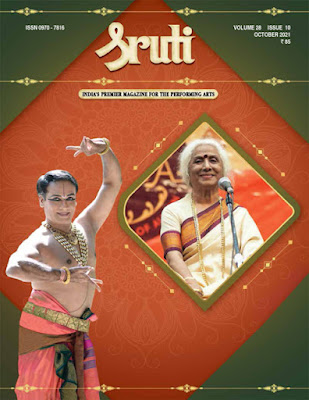 16 October 2021 is the 38th birth anniversary of Sruti. Launched by its founder and first Editor-in-Chief, N. Pattabhi Raman in 1983, the magazine continues to serve the performing arts with zeal and commitment. The journey over the decades has not been a bed of roses, more so as it is a “niche magazine” catering to music, dance and theatre; hence the flow of ‘Vitamin M’ (Money) has mostly been small except during the music-dance season and festival months. The pandemic has, for its part, added to the financial crunch and we hope that our well-wishers, subscribers, advertisers and sponsors, will enthusiastically come forward to support us in our continuous endeavour to uphold the high standards that we have set in the service of the arts.

The cover stories this month focus on two renowned personalities who were not born into families with a music or dance lineage, but have made it big by dint of their passion and toil in their respective fields.

Veteran Hindustani vocalist Prabha Atre—born 13 September 1932—is a trailblazer in many ways, erudite, quiet unconventional and revolutionary in her approach to matters musical. In a candid interview she has shared her views with writer Shailaja Khanna—on music, its teaching, festivals, selection of artists, as well as the attitudes of artists and rasikas. The 89-year-old scholar-musician believes in “change”, in the need to re-assess tradition in the current context if it is to survive and flourish.

Multifaceted Sathyanarayana Raju is a Bharatanatyam dancer, choreographer, teacher and curator, combining style and substance. His is a story of struggle, grit and determination in the pursuit of his passion – truly an inspiring and moving journey to success.

In this issue we pay tribute to veteran violinist Sikkil Bhaskaran who passed away on 20 July this year. He chose to be an accompanist and in his long musical career of about seven decades, he accompanied several generations of musicians. He served the Carnatic music field in an unobtrusive manner.

We also have an interesting interview with scholar and cultural analyst Bharat Gupt, wherein he has given a call to project India’s ancient art and heritage as our national identity, as also to undertake steps to revive India’s ancient theatre and make it a hallmark of contemporary productions—as the Greeks have done.

We continue with our series on the Pancha sabhas of Lord Siva’s Dance. This time Sudha Seshayyan writes about the Rajata sabha in Madurai, and also throws light on savants who composed  songs on the Ponnambalam and the Velliambalam. Our thanks are due to famous artist Keshav for sharing two beautiful illustrations with Sruti for a crisp article on dance in Vaishnavite Tamil literature.

The month of September saw the passing away of two personalities whom Sruti admired—Keshav Desiraju and veteran Carnatic musician, scholar, teacher and composer B. Krishnamoorthy. Keshav Desiraju (66), was a distinguished bureaucrat deeply engaged with public health and clean governance. He was recently in the news in music and literary circles for his much acclaimed book titled Of Gifted Voice – The Life and Art of M.S. Subbulakshmi. He was a good friend of Sruti since its inception, and would visit the office on his trips to Chennai. He voluntarily took upon himself the task of indexing the contents of our magazine even some twenty years ago. During the lockdown he diligently completed indexing the issues of Sruti published till 2020, and emailed it to us. Sruti will ever remain grateful to him for this mammoth task.

To conclude on a positive note. Congratulations to Apsaras Arts, Singapore, for successfully organising  a marathon online-cum-live tenth anniversary celebration  of Indian dance and music via the Indian Performing Arts Convention (IPAC). The recent expansion of its scope and its efforts to constantly improve standards in the performing arts in the region, are  indeed commendable. All the best!