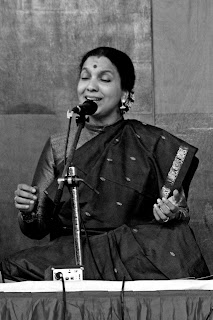 On the eve of Krishna Jayanti, “Arpana” (a service under Auroville City services) presented a unique concert, “Sri Krishna Rasa Panchamrutam” by Auroville’s newly appointed Secretary Dr Jayanti Ravi, her daughter Krupa Ravi, and her son Adit Ravi. Sri Krishna Rasa Panchamritam weaves the Katha (stories) from the life of Lord Krishna, Gitam (songs) from the life of Krishna and Nritya (dance) of Krishna at the Sri Aurobindo Auditorium at Bharat Nivas.

Dr Jayanti Ravi related stories of Krishna and sang songs in Tamil and Sanskrit. When she sang Mira Bhajan – Hari tum haro jan ki pid, I heard someone saying, “She sings like MS”. She invited the audience to join her in Dhun - Govind bolo hari Gopal bolo. She also sang for her daughter Krupa Ravi, a graceful Bharatnatyam dancer who performed Madhurastakam and Madu Maikam, choreographed by Radhika Surajit and Kararvinde, choreographed by Krupa herself. It was an effortless, non-hurried, soul -soothing performance. Awarded the Guru Mutthuswamy Pillai Award by Krishna Gana Sabha, and Kal ke kalakar by Sangeet Natak Academy, Krupa has learnt Bharatnatyam from Padmasri Ananda Shankar Jayant.

Dr Jayanti Ravi is an eminent classical vocalist. She has been trained in varied genres of Indian music including Carnatic, Hindustani, Abhangs, Shabdas and Sugam Sangeet. She also sings Gurubani from Guru Granth Saheb in Punjabi and Rabindra Sangeet in Bangla.

“I have stayed and studied at many cities in India and abroad and that has given me a chance to learn varied genres of music. I learnt from stalwarts such as Padma Bhushan Sripada Pinakpani, Sangeet Kalanidhi B.Rajam Iyer and my mother Dr Rajalakshmi Srinivasan,” says Dr Jayanti. 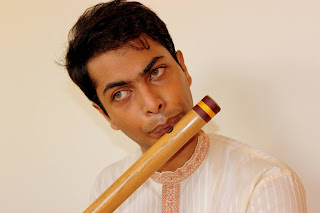 “In how many languages do you sing?” I asked her, full of curiosity.

“Who is the real Jayanti Ravi – a singer or an IAS officer?”

“Both are an integral part of me. Music balances my hectic political life. At the end of the day when I sit with my tanpura, I am at peace. I was posted at Godhra at the time of Hindu-Muslim riots. I was the first one to enter the burnt train. It was very a difficult and stressful time, but my music kept me sane.”

Dr. Jayanti Ravi is a graded artist of All India Radio.