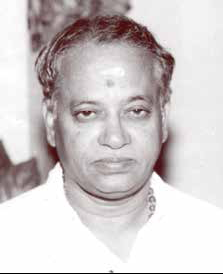 Veteran violinist Sikkil R. Bhaskaran passed away on 20 July 2021. Dedicated exclusively to accompaniment, the artists he shared the stage with straddle generations and read like a who’s who of Carnatic music—from Maharajapuram Viswanatha Iyer, K.B. Sundarambal and M.M. Dandapani Desigar to Sikkil Mala Chandrasekhar, N. Vijay Siva and Palghat Ramprasad. He is known, along with his contemporary, Tanjavur Upendran, for bringing to light numerous rising talents, Mandolin U. Shrinivas being particularly noteworthy, and encouraging other stalwarts to play for these youngsters. Bhaskaran had the distinction of having played for as many as three successive generations of multiple musical families and several august lineages.

Bhaskaran was born on 4 May 1936 in the town of Sikkil (located between Tiruvarur and Nagapattinam) to Rajagopalan and Vedavalli, in an Isai Vellalar Pillai family, a community involved in music for generations. Bhaskaran lost his father, a military man, at around age four. His mother, younger brother and he were then financially supported by Bhaskaran’s grandfather, Sikkil Ramasamy Pillai, who was a noted nattuvanar in Bharatanatyam. While watching the natya sevai on a visit to the Sikkil temple, Prof. P. Sambamoorthy developed an acquaintance with Ramasamy Pillai whose teaching style he liked and suggested that Pillai join Triveni Kala Sangam in Delhi. In 1960, Ramasamy Pillai did so. He later received the Central Sangeet Natak Akademi Puraskar in 1972, along with Begum Akhtar and T. Mukta among others.

Little Bhaskaran was studying in the local primary school in Sikkil, when representatives from the Shakti Nataka Sabha, then a new theatre company based in Pudukkottai, came scouting for indigent but talented children who could dance and sing. Bhaskaran was selected after he sang a song of M.K. Tyagaraja Bhagavatar. Thanks to his grandfather, Bhaskaran was also familiar with dance. Given their financial circumstances, Bhaskaran’s mother allowed the company to take her son, when they promised food, upkeep, training and even a small stipend. Ramasamy Pillai’s affiliation with the sabha, probably made the decision easier. Bhaskaran was barely 9 or 10 then and in 4th or 5th grade. That was the end of formal schooling for him. At Shakti Nataka Sabha, he was taught the Tamil and Sanskrit languages in addition to music, dance (for which Ramasamy Pillai was the instructor) and acting.  Some famous alumni of that sabha were Sivaji Ganesan, M.N. Nambiar, S.V. Subbiah and S.A. Natarajan. Bhaskaran remembered a play named Kaveen Kanavu where Sivaji Ganesan carried him in his arms while delivering the dialogue—Bhaskaran played the part of a child called Sumathi. He  donned many such roles—as young Rama and young Muruga. He reminisced that, on the day India achieved Independence, he, along with others from the sabha, were lodged at Varada Muthiappan Street in Georgetown, and they were all taken in a car to see Chennai city.

At the sabha, Bhaskaran saw and heard the violin for the first time; he was taught the bare basics and decided that he wanted to take up the violin exclusively. He returned to Sikkil, having been with the troupe for some two years or so. Residing in Sikkil with his family, he began his music training with Tiruvarur Subbaiyer— travelling by bus to Tiruvarur for classes. A couple of years later, he moved to Mayavaram and began traditional gurukulavasam with Mayavaram Govindaraja Pillai. How he was introduced to Govindaraja Pillai is not known exactly but the Isai Vellalar community was a close-knit one and it is possible the acquaintance was facilitated by Ramasamy Pillai. It was on a trip back home to Sikkil at the time of this tutelage that Bhaskaran performed his first concert. A person had visited his home and requested Bhaskaran to play in a concert for which he could not find a violinist. Given the organiser’s earnestness and the family’s dire straits, Bhaskaran agreed to do so. By the time he got back to Mayavaram, his guru had got word that Bhaskaran had played very well in the concert. Govindaraja Pillai advised  his disciple to quickly begin playing well while the people felt that he was already doing so!

This was a gurukulavasam in a very traditional sense. Bhaskaran would wake up early in the morning at around four, clean and clear the cowshed, wash the cows, milk them and take in the milk to Govindaraja Pillai’s wife. He would then finish his ablutions and sit down for practice. As and when needed, if the cart driver was not available, he would also drive the bullock cart. Later in the day, when Govindaraja Pillai was done with his morning routine, he would ask Bhaskaran to bring the violin and then proceed to make corrections to what the boy had played earlier that morning. Much of the rest of the learning was on the go, by accompanying his guru on concerts and extensive travel.

It was the general practice of well-established artists to have a student or two tag along with them. An unforgettable camaraderie would develop among the students stemming from their travelling together frequently, usually in a railway  compartment different from that of the guru. Semmangudi Srinivasa Iyer, till his last days, always addressed Bhaskaran as “arai ticket” (half ticket), since he had seen him several times as a young boy travelling on half-fare!

Bhaskaran was married in 1962 to Vasantha (who hailed from Kumbakonam), in Swamimalai. Rajamanickam Pillai not only attended the wedding but told Bhaskaran that his firstborn would be a boy and suggested he be named Swaminathan—that in fact happened, and Bhaskaran’s eldest son is Swaminathan.

A relatively early concert that Bhaskaran would often mention was accompanying T. Brinda and T. Mukta for All India Radio’s (AIR) National Programme of Music, aired from Tiruvaiyaru. It was notable for two aspects—he was yet to receive any grading from All India Radio, and secondly, the opportunity arose because many other violinists had declined to play for the sisters since they were female.By this time, Bhaskaran was in high demand, and the couple decided to settle down in Kumbakonam as it had better train connectivity than Sikkil. Bhaskaran, mridangist Tanjavur Upendran and flautist N. Ramani were all compatriots from Tanjavur district and the best of friends from their teens and remained so for life. Given that needs were minimal, all were sufficiently provided for by performing in  the several villages within the district itself for the various festivals conducted there. The visiting artists would usually be put up on the front porticos of the large houses. Travelling outside of the district was a bonus rather than an abject necessity for these artists then.

Bhaskaran’s son recalls his father telling him that it was the local bullock cart drivers who, those days, would provide them information as to which artist performed in which village, as well as the audience response. The cart drivers would add their own opinions in good measure, explaining what facet of each artist they liked. This throws light on the fact that temples probably served as the most prolific place of patronage, and classical music had a popular reach and also an impact on the general public. It brings to mind posters of old movies that featured well-known singing stars and the number of songs in them—it was a huge selling point. Most of these songs had a strong Carnatic base.