For ages, the ancient love story of Śakuntalā has inspired artists and composers all around the globe. From Theophile Gautier, to Franco Alfano, multiple adaptations have been released, multiple operas have been seen. Now, a special adaptation of Kalidasa’s Abhijñāna Śākuntalaṃ is to be released on the silver screen in Sanskrit India’s oldest language .

Many movies on the liaison between Śakuntalā and Duśyanta have been produced by the Indian Film Industry, in various languages, in different decades, and with different actors. One of the most notable ones is the Tamil movie starring M. S Subbulakshmi and G. N Balasubramaniam in the main roles (released in 1941). The interpretations have always been slightly different from one another, with music always playing a vital role.

Śākuntalaṃ - Produced and directed by renowned orator Dushyanth Sridhar, is a Sanskrit film with dialogues in Sanskrit and the ancient language Prakrit. The influence of the rich Indian heritage is expected to be deep in this film, with incorporation of recitation of hymns from various vedas and use of yogic postures. The detailing in the background showcases architecture from the Chalukya, Pallava, Hoysala and Vijayanagara periods. 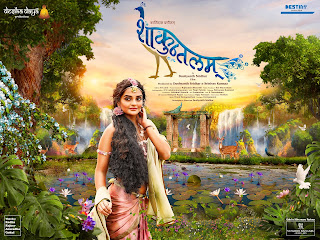 The songs in the film have lines from the compositions of master composers and from treatises in south Indian languages. The compositions, tuned by the eminent composer Rajkumar Bharathi, are set in Carnatic and Hindustani ragas, with the mellifluous voices of lead singers Abhishek Raghuram and Deepika Varadarajan traversing the notes.

Sequences of Bharatanatyam, and Yakshagana dances are to be seen in the film, with Anitha Guha and Keremane Sivananda Hegde as the choreographers.

Though the main cast is mostly of debut artists, the supporting cast consists of seasoned actors such as Y Gee Mahendra, T. V Varadarajan, Mohan Raman, amongst others.  The lead actress, Payal Shetty (a trained Kathak dancer) and Shubham Sahrawat’s transformation and portrayal of Śakuntalā and Duśyanta respectively, are greatly anticipated. The entire team had rehearsed their dialogues for two months online before the actual shooting of the film began, to ensure that the dubbing process went smoothly.

A premise like Śākuntalaṃ, set in the forests for the most part, lends naturally for a mesmerizing visual presentation. Audiences can look forward to the rustic appeal in the film created by the use of Khadi clothing coloured with natural dyes, procured from Gandhigram and Crafts Council of India.

Despite the fact that the number of Sanskrit films produced is dishearteningly low, this adaptation of Kalidasa’s masterpiece in its original language, is greatly anticipated for the many cultural aspects so consciously integrated by the core team. Masters in their art forms - B. Lenin, Sai Shravanam, Magi Natesh, Lakshmi Srinath - are sure to have added their magic to this magnum opus. All in all, this is a Vocal for Local project in so many ways!