Madhusudhanan Kalaichelvan, a Professor in Architecture with deep knowledge in Saivaite and Vaishnavite literature, music, philosophy, Tamil epigraphy, and many related disciplines and his oratory skills in Tamil and English, interspersed with Sanskrit slokas and hymns leaves a lasting impact on his audience. He has collaborated with many acclaimed musicians and presented very interesting lectures on a variety of subjects. 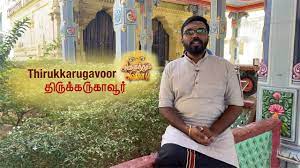 Kalaichelvan, in his inimitable style covered all minute details about the temples, idols in the temples,  iconography, sthala vriksham, temple tanks,  festivals, and various stories covering the temples, also interviewing the devotees present there. Even though some of the stories are familiar, his lecture covers many unknown details and customs of worship in the temples. The visuals covering gigantic temples, mammoth praharams, exquisitely decked deities, vahanams, all make it an exhilarating experience for the viewers. His chaste Tamil pronunciation and  communication skills are commendable.

The music used in these videos adds to our enjoyment. Snatches from Tevarams, Divyaprabandham, Dikshitar kriti Bhajare re citta in Kalyani are sung by popular musicians like Sikkil Gurucharan, Ashwath Narayanan, Bharat Sundar, Vignesh Easwar, Vidya Kalyanaraman, Vinaya Karthik Rajan, Saindavi Prakash, and Suchitra Balasubramaniam.  Veena by up coming musician Anjani Sreenivasan, mridangam by Aswini Sreenivasan, percussion by Venkat, provide soothing music in many episodes. The videos are produced by Ragamalika TV headed by noted music curator, Subhasree Tanikachalam, who has also penned a viruttam for this production.