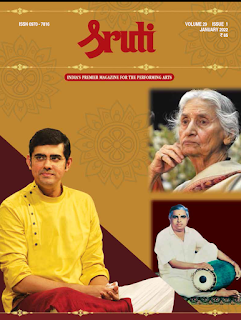 Happy New Year 2022 to all our readers. Will this year open a new chapter, reveal a new verse, or will it continue to be the same old story of pandemic, caution, curbs and restrictions? Whatever it may be, as Nido Qubein says, “Your present circumstances don’t determine where you can go. They merely determine where you start.” And according to Plato, “The beginning is the most important part of the work.” Vern McLellan, on his part,  puts the onus on each one of us when he says:  “What the new year brings to you will depend a great deal on what you bring to the new year.”

Thousands of rasikas must be spending the month of Margazhi watching the gamut of online concerts on display – quite a saturating spread over a month with a concentrated offering in the last ten days of December 2021. Many have ventured out after a long break, to once again physically attend and savour live programmes in concert halls – that is indeed a vibrant, unmatched experience – whether it be music, dance, drama or lecdems.

The Sruti Foundation too, in collaboration with the Music Forum, had organised  a Lecdem Mela at the Arkay Convention Center in Chennai, over two weekends. This time the focus was on personalities no longer with us, who have made a notable contribution to the field of Carnatic music. The sessions devoted to veteran musicians, composers and scholars like B. Krishnamoorthy, Tanjavur Sankara Iyer, Sripada Pinakapani and maestro Lalgudi G. Jayaraman, drew a reasonably good audience with Covid protocols in place. The synergy between the presenters and  the onlookers was indeed palpable. You can view the Lecdem Mela sessions at your leisure on Sruti’s YouTube channel.

In the January issue of Sruti, the focus is on three varied personalities.  Nonagenarian Kapila Vatsyayan, whose first death anniversary was observed some months ago, was a trailblazer and pioneer in the field of scholarly research in Indian art and culture.  The doyen, who was an institution builder, toiled to build bridges between the regional, national and international  field of arts.  I recall being bowled over by her erudite scholarship, her holistic vision of the arts and high flown language, when she delivered the keynote address at the December festival of the Narada Gana Sabha many years ago.

Mavelikkara Krishnankutty Nair was a veteran mridanga vidwan whose centenary was celebrated in 2021. He played for several artists belonging to different generations. He is well known for his melodic accompaniment which embellished the music of the main artist. The fact that he was the mridangam accompanist  for M.S. Subbulakshmi for several years, itself speaks volumes about the man and his accompanying abilities. He also worked for the welfare of artists.

The third personality is a much younger artist – Sikkil Gurucharan, who hails from a family of renowned Carnatic flautists, but has made an impressive mark as a fine vocalist. Blessed with a good stage presence and voice, he has equipped himself well and has been able to consistently hold on to his place in the Carnatic music circuit. His forays into innovative collaborations too have won him large audiences.

In the section on Heritage sthalams, the series on the pancha sabhas comes to a conclusion with the article on the Chitra sabha penned by scholar Sudha Seshayyan. And of course, we have some of our regular features like News & Notes, Bookshelf and Snapshorts to keep you abreast of what is happening. So continue to read Sruti.

The new year is a canvas waiting to be painted, it is a song waiting to be set to tune, it is a dance waiting to be choreographed, it is a proscenium waiting to come alive with creative ideas. So let us all “begin” this New Year 2022 on a melodic, harmonic note with renewed, positive energy.

Email ThisBlogThis!Share to TwitterShare to FacebookShare to Pinterest
Labels: S.Janaki