Every year, come January and Republic Day, we eagerly await the list of Padma awardees announced by the Government of India. The Bharat Ratna is the jewel in the crown of civilian awards, followed by the Padma Vibhushan, Padma Bhushan and Padma Shri in the order of ranking. Like several other awards, the Padma awards too, have not been above controversy; as they are often influenced by the powers that be. The Padma awards – presented to distinguished persona in different walks of life, continue to be among the coveted honorifics in the country. 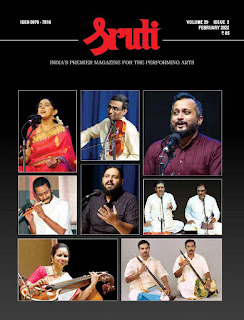 India is one nation which can proudly boast of its matchless, rich and varied cultural heritage, and hoary traditions dating back to several millennia. It is numero uno in this field, but when it comes to honouring personalities in the arts, or budgeting for the arts, arts administration or appointing heads for cultural bodies, such matters are not accorded the importance and urgency they deserve. This year too, a quick glance at the Padma awards list reveals that not many artists have made it to the meritorious list. In the list of 128 Padma awards announced this year, very few belong to the category of performing arts. Four eminent personalities will be adorned with the Padma Vibhushan for their “exceptional and distinguished service” and we are delighted that vidushi Prabha Atre – vocalist, scholar and veteran doyen of Hindustani music (who was recently featured on Sruti’s cover), is one of them. Among the 17 persons honoured with the Padma Bhushan, two artists find a place: one is renowned Hindustani vocalist Rashid Khan who had bagged the Padma Shri about 15 years ago. The other is  the famous septuagenarian Punjabi folk singer Gurmeet Bawa who passed away in November 2021. She had the distinction of being the first Punjabi female artist to sing on Doordarshan. The list of 107 Padma Shri awardees is peppered with the names of classical and folk artists. It ranges from iconic veterans to those quietly serving in their  chosen fields. It includes names like the Kathak divas Kamalini and Nalini Asthana, veteran Carnatic musicians A.K.C. Natarajan and H.R. Keshavamurthy, and the octogenarian Sadir practitioner and teacher R. Muthukannammal – among the last living devadasis in Tamil Nadu.. Sruti extends its congratulations to all the Padma  awardees of 2022. However, one feels it would have been befitting to confer the Padma Bhushan on the 92-year-old A.K.C. Natarajan, whose name is synonymous with the clarionet in Carnatic music.

As in previous years, in the February issue of Sruti, we bring to you reviews of the music season 2021-22. Our correspondents have been busy attending live and virtual concerts and putting them down on paper for our readers. A special word of appreciation for our Chennai correspondent C. Ramakrishnan who has diligently toiled almost like a one-man-army. It is evident from the reports that nothing can match the feel, the aura and the spirit of “live, in-person concerts”. We also have interesting articles on events which have combined innovation with tradition in order to sustain the interest of future generations. We are privileged to publish a book review by renowned writer  Shanta Gokhale. She has written a beautiful and insightful
review of a Marathi book which makes you feel “How I wish I could read Marathi!” At the same time it underlines the necessity of having such excellent translators who can capture the spirit of the original writing.

As Sruti goes to print, it is also time to convey our condolences to the members of the bereaved families of the legendary Kathak maestro Birju Maharaj, of the iconic archaeologist and scholar Dr. R. Nagaswamy, of Milena Salvini – founder-director of Mandapa Centre, Paris and ardent propagator of Indian arts. We are also saddened by the sudden passing away of our Chennai correspondent V. Karpagalakshmi (better known as Lakshmi Venkataraman). She was N. Pattabhi Raman’s niece and was associated with the magazine almost since its inception, contributing articles from time to time.