for the bees to feed,

they mix their preserve

for a future need;

the Queen and the Drone,

wait for the that day

when the moon never shone

If not stolen by the men around

and their tiny shelves;

But where is the nectar

and where is the honey

to feed the mind and

the intellect of so many;

The one that shines

and a soul sans par;

The effulgence of the sparks

with a glow that never leaves 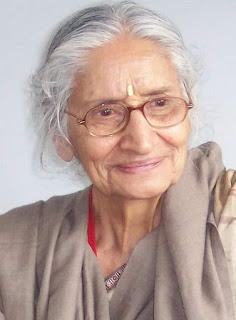 Dr. Kapila Vatsyayan was one of the most distinguished personalities and unparalleled scholars of our times. Of course, much has been written and published about her scholarship and wisdom; nevertheless I take the liberty of sharing a few thoughts about her since I have known her for over six decades.

I first met Kapila ji while she was still an under-secretary to the Government of India, Ministry of Culture in New Delhi in 1958-59. This was the time when I was awarded that prestigious Government of India scholarship by the Ministry of Culture, New Delhi. I was 14 years old then. She had signed in the correspondence and the certificate. I was later given to understand that my scholarship award was challenged. The reason was that I was pursuing my schooling while training to become a Bharatanatyam artist. It was mandated that only students from traditional families were eligible for such scholarships. However, my scholarship was upheld and I was awarded the same as a special case. Kapila ji continued to keep in touch with me even after my marriage in 1965. She used to visit us in Chennai and has also stayed with us. She made it a point to get me butter (in the mud-pot) prasadam from Dwaraka whenever she went to the temple. She was a spiritual person and we have travelled to Kancheepuram to pay obeisance at the Kanchi Kamakoti Peetham.

Once I had mentioned to T. Balasaraswati that Kapila Vatsyayan was in town and Balamma asked me to bring her home to her Poonamallee house and I still cherish the extempore performance that Balamma gave for the two of us.

I have had the occasion to review Kapila Vatsyayan’s book in the past. We have had several fruitful discussions on the subject of dance, painting, poetry, culture and music. I still remember the time when Kapila ji and Dr. Nagaswamy started the Natyanjali festival at the Chidambaram Nataraja temple in 1981. She was a very soft spoken person though being very erudite. She was loving and affectionate towards me and my family.

Kapila ji made many pioneering efforts and headed several, cultural, education and governmental organisations. Her writing and publications stand testimony to the indelible mark that she left behind in the art history of the country.

I pay my respects to this noble soul and shall cherish the moments of our association.