The evening commenced with one of Ratikant’s most popular compositions, Bho Shambho –a prayer to Lord Siva penned by  Swami Dayanand Saraswati, which explores the multifarious facets of the Lord through improvised expansive movements all within the traditional Odissi format. With an unerring grip on rhythm and undiluted grammar of the choreography, three well-trained dancers negotiated the relatively fast-paced number in ragam Revati portraying the striking diversity of Siva’s attributes with nuanced detail with appealing movements in the reverberating spiritual vein as trained by their guru, Ratikant. 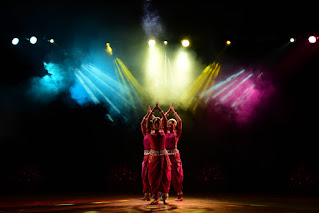 The next number Meepa premiered and dedicated to guru Kelucharan Mohapatra as a mark of respect on his 96th birth anniversary needs a special mention. Well-crafted with a unique blend of music composed by Agnimitra Behera, especially the delicate strokes of the piano at the beginning and soul-stirring flute-violin combination. The rhythm and the strength of movements of the choreography of Ratikant, with the sharpness and precision of the dancers combined with the fantastic light design of Devi Prasad Mishra elevated the performance. 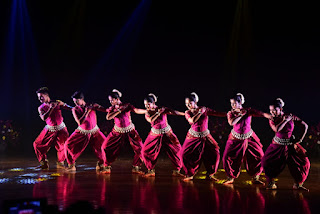 Lovely sways and swings, floor moves with spellbinding skills and styles in the piece had a dramatic appeal with visual imagery, a hallmark of Ratikant’s choreography primarily due to its graceful contours, seamless dips in and out in harmony, in the fascinating execution with variable energy, neatness and a dialogue with the expansive stage space with the finesse of a memorable production. Srinibas Satpathy on the flute, Agnimitra Behera and Suramani Ramesh Chandra Das on the violin with Ravi Shankar Pradhan on the sitar enriched the music as accompanists. 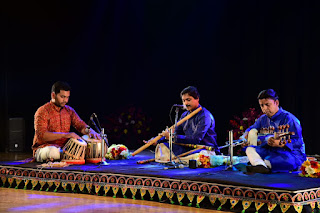 The music section in the second half saw the magic of jugalbandi in the sarod –flute presentation by two well-known musicians of Odisha. Jabahar Mishra on the flute with sarod and tabla player Sandeep Kumar Raut on the sarod presented raga Gorarakha Kalyan set to Mata tala and drut Teental in a soulful recital of raga, rhythm and melody accompanied on the tabla by Subhransu Sekhar Sahoo. The distinctive and intense phrases of the raga Misra Pilu in tala Dipchandi and Kaharva were offered in definite terms exploring the strong and subtle nuances and were received well by the audience. Their second presentation of the popular bhajan Raghupati Raghava Raja Ram was an experience to cherish. The two-hour evening was compeered by Sribas Ghatuary with his usual efficiency.