Rabindranath Tagore’s dance-drama, Chandalika sourced from a Buddhist legend highlighting the power of spiritualism as preached by Buddha, has been his launching pad for commenting on several issues that are needed for the existence of a healthy and happy society where everyone is seen as equals -- be they, men or women. The issues Rabindranath Tagore touched upon in his dance drama Chandalika written in 1938 are as relevant today as it was when it was written.  Tagore’s protagonist of the drama is Prakriti - the daughter of a Chandal, who belongs to the fringes of the caste system. Though sourced from a Buddhist legend, Ananda the young disciple of the Buddha is not the protagonist. The focal point of this dance-drama has been the existent inequality in our society, among other things. This inequality brings in its wake socio-economic, political and cultural inequality that exists in our country. Besides, the dance drama has also commented on female sexuality. Today the world talks about subaltern history as well as women’s sexuality. The visionary poet has put forward these ideas for a healthy society as early as the early 20th century. 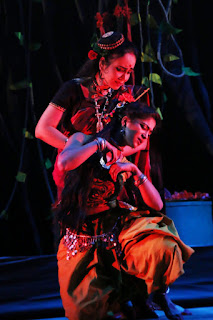 Bharatanatyam performer Sutapa Awon Pradhan chose to perform Chandalika with her repertory group to remind people of the message of Tagore. She has skillfully conveyed his ideas with sensitivity. As a choreographer who understands rhythm and the beauty of dance movements and is able to interpret the language of the lyrics of Tagore with the subtlety of body-language Sutapa Awon is a winner and has worked wonders.

As penned by the poet each and every song in the drama, the dialogues, and the mantras chanted were emotionally charged. All that the choreographer needed to reach her desired goal was a careful understanding of the text and the layers of interpretations that it offers.

Sutapa Awon Pradhan has worked hard in her endeavour to portray the ideas of the dance-drama. She was able to engage the attention of the audience from the start to finish. The story is poignantly told when Prakriti, the protagonist is branded as an untouchable. With her status as a chandal’s daughter, she is the poorest of the poor and naturally an outcast. The pathos of this awareness was brought out in the production. Her Praktiti was a rebel as the poet had intended. 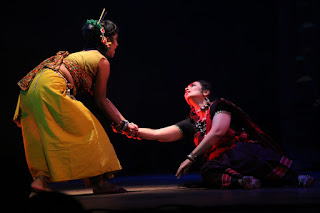 Ananda, the young disciple of Buddha passes by when Prakriti is near the well, chanting the Buddha mantra Jo sannisinno barabodhimule. She is at her most vulnerable moment of torment caused by her societal stigma of being a Chandal’s kanya. The path of Buddha has taught Ananda the equality of all human beings. And that makes him ask her for water to quench his thirst.  Her answer is that she is the daughter of a chandal, which makes the water of her well unclean and doesn’t cut any ice with him. His answer, “As I am so are you”, strikes a chord in her heart. She has fallen in love. Why not? After all, she has human feelings like everybody else. For the first time, she realises her dignity and the place she deserves in society.

There was clarity in the renditions of these in dance. In Chandalika, Tagore has explored the neglected. His Chandalika is a powerful critique of all that ails our society. Prakriti’s boldly protests against the injustice, that the caste system has doled out to a large section of the people of which she is a symbol.

Chandalika portrays Rabindranath Tagore’s ideas of female desire in an untouchable girl. Dance to Tagore was a vehicle through which contemporary ideas and predicaments could be conveyed to the audience. It should ideally bring about a change in people’s minds; our hearts weep for Prakriti.

Just as Tagore had intended, Sutapa has taken inspiration from both the classical dances and the non-classical dances. Through dance, he has expressed the female identity that defies accepted norms, brought out excellently in Sutapa’s rendition. As in his other dance dramas here too religion, poetry, music and dance merge. 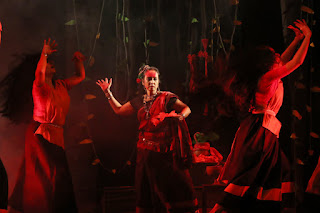 In the dance drama Chandalika, Prakriti is constrained by her socio-political, economic and cultural conditions. The drama articulates Prakriti’s aspirations through the rhythmic movement of her body. Her mother is portrayed as one who accepts the position assigned to her by society-it takes all sorts to make up this world. At her daughter’s behest her magical powers bring Ananda, who is soaked in the teachings of Buddhism to Prakriti, to fulfil her lust, but seeing his lacklustre image in the mirror shown to her by her mother, she undergoes a transformation. Prakriti had seen him with the radiance of his enlightenment soaked in the teachings of Buddha and then to see him as an ordinary mortal for her benefit was a fall she couldn’t imagine.  She had loved a man who was sparkling bright, but what she saw in the mirror was the image of a man devoid of light radiance.  Love elevates her. The audience is in a dilemma. What was the primary message of the dance-drama? Was it all about Buddha’s teachings or was it about the dignity of a woman that Tagore has carefully penned?

Sutapa Awon Pradhan the choreographer has made use of the classical dance form of Bharatanatyam, moulding it sufficiently to suit the beautiful lyrics and dialogues penned by Tagore. She has used vigorous folk dances while casting a magic spell. The amalgamation of dance styles has merged seamlessly in the drama.  The music arrangement was done by Kalyan Sen Barat. Vocalist  Jayati Chakraborty who sang the songs of Prakriti had the effect of conveying anger, pathos, sorrow and serenity. Moumita Banerjee vocalised the songs of the mother, which was unique. Madhurima Das in the role of Prakriti melted our hearts. Sutapa Awon Pradhan in the role of the mother showed how subjugation is taken for granted. 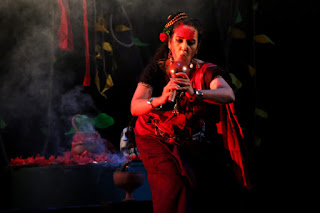 Students of Nrityalok danced the group dances which gave fullness to the drama. Tarun Pradhan the Director of Sarabhuj did the stage designs. Gopal Ghosh’s light designs helped in creating the scene where magic was used to bring Ananda to Prakriti. Make-up man Bablu Mondal’s acumen brought out the uniqueness of the different characters.

I cannot at this point help but recall Sutapa Awon Pradhan’s choreography of Rabindranath Tagore’s Natir Puja in Satyajit Ray Auditorium at ICCR, Kolkata in 2011 to commemorate the 150th Birth Anniversary of the poet, which the poet himself had staged in 1926 at Jorasanko and filmed in New Theatres in the year  1932. (Unfortunately, all copies of the film had burnt). Sutapa had choreographed a beautiful dance drama, true to Tagore’s spirit, which is etched in my memory.