The Konark Festival 2021 was held offline for the second consecutive year after the pandemic that struck the world. Odisha Tourism had left no stone unturned for the success of this one-of-its-kind festival. They had even adopted stringent measures for following the norms and restrictions to prevent the spread of the dreaded Coronavirus.

The smooth flowing of the first two days programme of the five-day-long festival was like a lull before a storm. Then came the third morning, when the rain god simmered with fury. The signs were clear –a cloudy morning with incessant drizzle, enough to dampen the spirits of the organisers as well as the performers. Weather reports on the third day morning of the festival by the India Meteorological Department predicted Cyclone Jawad would reach the coast of Odisha on 3 December 2021 due to a deep depression over South East Bay of Bengal.

To be selected to perform in the Konark dance festival is the chance of a lifetime for most dance companies. Mayur Lalit Dance Company, Dasyam Centre for Mohiniattam, Spanda Dance Company,, Suravi and GKCM Odissi Research Centre could not perform, because Odisha Tourism was left with no other option, but to cancel the festival starting from the third day.

However, December first and second 2021 was able to showcase the scheduled programmes. On 1 December 2021, the weather in the small town of Konark was salubrious. It was just the perfect season to be in that temple city, which boasts of the Konark Sun temple on the shores of Chandrabhaga river, built by Narasimha Deva -1 in the 13th century, to witness the Konark Festival of dance showcasing the beautiful classical dance forms of India. The open-air two-tier stage, which is where the dances were presented had for its background the richly sculptured Surya temple whose beauty is sheer joy. It reminded me of, Keats’ line “Beauty is truth, truth beauty that is all ye know on earth, and all ye need to know”. 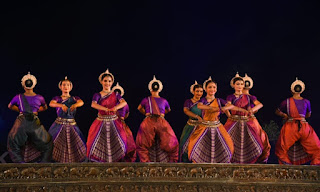 The statues practically seemed to come alive from the walls of the chariot of Surya to entertain the audience, before going back to their allotted space on the temple walls.  The first team to take the stage was from Gandharva Mahavidyalaya. Renowned Odissi exponent Madhavi Mudgal and troupe presented Nartan Ganesh, practised to perfection in Odissi style. Madhavi Mudgal’s trained dancers were expert dancers. Sometimes they took on the role of bhaktas, while at other times they imitated Ganesha. Careful observations by Madhavi facilitated the dancers to adapt the swaying of the trunk and flapping of the huge elephant-like ears the remover all obstacles. The group of dancers evoked bhakti. The music composition was by Madhavi Mudgal and Pt. Vinaya Chandra Maudgalya.  Gunakri Pallavi showed the joy and rhythm of movement, which is beauty in itself. This was a composition of the legendary Gopal Chandra Panda and a rhythm composition of late guru Banamali Moharana. There is rhythm in God-gifted human bodies and the graceful movement of dancers created aesthetic bliss. The musical ensemble supported the dancers in creating a perfect ambience. The music echoed in our ears hours after it was actually heard.  The abhinaya piece, Uthilo ede kahinki re, is an old composition of Gopal Krushna Patnayek, which Madhavi used to showcase the naughty activities of child Krishna. It had an old-world beauty. In Trayi the moods of the three seasons Vasant, Grisma and Varsha were enumerated through the musical traditions of Hindustani music. Madhavi Mudgal’s flawless choreographic skill was appreciated. 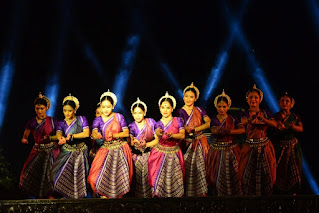 Choreographer Vaswati used the composition of Shanti Sharma based on raga Yaman Kalyan, Bairagi, Bhatiar, Malkaus and Bhairavi in Panchakshar.

Tarana in raga Bahar in Teental used abstract phonetic sounds in their renditions. The music composition was by Hindustani maestro Amjad Ali Khan. Every nuance of the Kathak technique and subtle abhinaya through which the stories were told made a mark. The dancers were in top form.

On the  2nd day of the Konark Festival, Abhinaya Dance Academy of Anita Sharma made a  Sattriya presentation. A disciple of guru Jatin Goswami, Anita Sharma has taken giant steps to be the kind of performer that she is today. She made an exposition of this living tradition of dance, which is practised in Sattras to this day. Krishna Vandana naturally was paying obeisance to Krishna; Sutradhari nritya involved movements of the head, hands and limbs; through Nandi Geet she offered her prayers to the devatas, God, monarch and the Brahmins. Bhatima, Chali Nach, Leela Govindam, Rajaghoria Chali and Gajendra Moksh were all traditional pieces rendered. The audience got a summary of all that  Sattriya dance is about. These varied items were suitable for understanding the dance form.  The pieces were all of antique value. However, the dance form has to take a big leap to make itself contemporary and speak the language of people too and not only of the gods. Rajghoriya Chali was a pure dance, showcasing the joy of rhythm and grace. The dancers were clad in immaculate Assamese costumes unique to Sattriya.


Niranjam Routh and a group of Nupur presented Devi, representing the ten Mahavidyas in Odissi style of feminine divinity. She blesses the deserving and also takes no time in getting rid of the unwanted. Rag Desh Pallavi was presented to the music composition of guru Ramhari Das. The whole stage filled with dancers was captivating.  Guru Niranjan Rout’s practical training has paid rich dividends. However, the best piece he presented was Sun, supreme of all the planets.  The massive dance area consisting of a two-tier stage was filled artistically with skilled dancers. Surya has been a recurring theme in all Indian classical dance forms. Here it was richly presented in the Odissi dance form. Guru Niranjan Routh the founder of Nupur, is an eminent creative artist and is totally dedicated to the enrichment of the culture of Odisha.