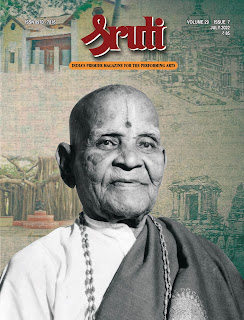 Some things happen only when they are destined to happen in spite of the effort you put in to try to make them happen! Of course, this does not deter us from trying our best to make things happen. Sounds like a jolly tongue twister, but it is only a general observation. We have experienced this in Sruti off  and on, but two instances stand out – when we started putting together material on Madurai Somasundaram and Mysore Vasudevachar. For years we were trying to bring out  comprehensive stories on these two giants, but things did not fall in place till recently. Last year, in July 2021 we finally succeeded in publishing a cover  story on Madurai Somu.  And in this July issue, we present to you the cover story on the great vaggeyakara Mysore Vasudevachar.  Difficult to believe, but Sruti began  collecting and sifting through the material on this scholarly musician almost thirty years ago! Some years later, scholar-musician S. Rajaram offered to write about his famous grandfather, but he was unable to devote enough time to this after he took on the mantle of directorship of Kalakshetra. Finally, our efforts have borne fruit after several years,  when arts activist and writer V.R. Devika (who too has her roots in Mysore) offered to write for Sruti about the ‘grand old man’ soon after she played the narrator for Vasudeva Gana Sudha presented by the Dhananjayans recently. She has done extensive research on Vasudevachar for the purpose and visited the places associated with him. You will certainly relish the two part feature on the master composer. Vasudevachar adorns Sruti this time, with images of Mysore, his house and Kalakshetra in the background. Another article with a Mysore connection is about a CD titled Nrithya Sangeetha, featuring   compositions of the musician-king Jayachamaraja Wodeyar which lend themselves to dance.

The spotlight this time is on veteran artist Prof. A. Janardhanan who celebrated his  80th birthday this April. Deeply loyal to his alma mater, he has spent his lifetime serving in Kalakshetra as a student, academician, guru and a performer par excellence. Sruti is privileged to have published a cover story on this unassuming artist a few years ago. On the occasion of this recent milestone, we join in the felicitations and share with you his insights on ‘dance matters’.

Mannarkoil Balaji is another artist, who without much fanfare, has made a mark in the field of percussion as a versatile senior mridangist and a well versed teacher and writer. In an interesting interview he provides insights into his life-rhythm.

This year Guru Poornima falls on 13 July 2022 – it is a day for disciples to pay respect to their gurus. The ‘Gu-ru’ is much
more than a teacher, he/she is one who leads the disciple from darkness to light, from ignorance to awakening and towards the light of true knowledge.

In the stories about Mysore Vasudevachar and natyacharya V.S. Muthuswamy Pillai you can peep into the past, and get an interesting glimpse into the guru-sishya relationship in the gurukulams of yore.

Sruti mourns the passing away of veteran Bharatanatyam exponent and teacher M.K. Saroja. She, her late husband Mohan Khokar and son Ashish Khokar have all along been well wishers of Sruti. Our condolences to the bereaved family.

There is no doubt that art is entertaining, but whenever possible, art should also play the role of a catalyst in society—like Gurudev Rabindranath Tagore did through his numerous poems, songs and dance-dramas (read in the News & Notes section). Art can be an effective  vehicle to sensitise the audience against evils and to uphold values. Art that is elevating is what lingers on – and it is the responsibility of the artists to play their chosen roles to perfection.