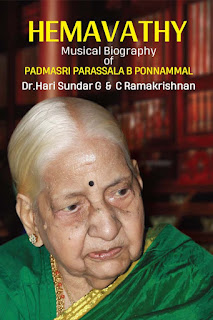 Hemavathi -- a musical biography of Parassala B. Ponnammal -- jointly authored by G. Harisundar and C. Ramakrishnan -- was released at a well-attended function at Ragasudha Hall, Mylapore, Chennai on 22 April 2022. Hemavathi is a rough translation into Sanskrit of Ponnammal -- the celebrated vidushi from Kerala -- who was born on 29 Nov 1924 at Parassala, south of Tiruvananthapuram. She lived a simple life, soaked in chaste Carnatic music, till June 2021 when she shed her mortal coils.

The event in Chennai was jointly organised by the department of music, Kannur University, Nada Inbam, Chennai and Hemavathi Music Chamber, Tiruvananthapuram.

The book release function heralded a three-day music festival from 22 to 24 April with concerts in the evening.

The function started with a prayer by young Sri Lakshmi and Madhavan trained by Sudha Easwaran, who rendered Ananthapadmanabham asraye -- the traditional invocation song of the erstwhile Travancore State composed by Sangita Kalanidhi L. Muthiah Bhagavatar (in Arabhi raga) -- bringing nostalgic memories of a bygone era.

G. Harisundar, author of the book, welcomed the guests Guruji Kasi Viswanathar of Sri Vedavyasar Tapovanam, Chennai, Cleveland V.V. Sundaram, and vidwan R.K. Shriramkumar. A management professional, Harisundar detailed the background of writing the biography, and how he managed to obtain Ponnammal’s consent while she was alive, for the noble venture.

Harisundar mentioned that the attention of the music world was drawn to the grand old lady when Aswathi Tirunal Rama Varma, scion of the Travancore Royal family and himself a musician of repute got her to sing at the haloed Navaratri Mandapam in Tiruvananthapuram. Eventually Parassala Ponnammal was credited with the status of the first woman to sing at the Mandapam in its history of 177 years when she performed a fine recital on the first day of the Navaratri series on 23 Sep 2006 at the ripe age of 82. ‘The golden pride of Anantapuri’ sang at the Mandapam till 2019.

Parassala Ponnammal was one of the fond disciples of Semmangudi Srinivasa Iyer and other stalwarts who taught at the Swati Tirunal College of Music (then known as Music Academy, Trivandrum) in its initial years. Credited with many firsts, she was the first woman to head a Government music institution in Kerala when she retired as the principal of the RLV College of Music, Tripunithura. She was the first woman singer from Kerala to receive the Padma Shri award. A Top grade performer, she broadcast from All India Radio for many years. She was a repository of Swati Tirunal kritis, compositions of the music trinity and other vaaggeyakaras as well as many devotional compositions.

The Malayalam edition of the biography Hemavathi authored by Harisundar was released at a solemn function at Kaudiar Palace, in Tiruvananthapuram, by Princess Pooyam Tirunal Gouri Parvati Bayi in January 2022. It was also released at Kannur University the same month by Vjay Neelakantan, Founder, Perunchalloor Sangeetha Sabha.

The present English version of Hemavathi is the result of a joint effort by Harisundar and C. Ramakrishnan, Sruti Correspondent, who too has a close association with the Ponnammal family.

Cleveland V.V. Sundaram, in his felicitation address, recalled that it was K.N. Shashikiran of Carnatica who arranged a concert of the doyen (soon after the Mandapam event) in Chennai, leaving the rasikas wondering how they had missed Parassala Ponnammal's music all these years though she was familiar to the senior professionals. She sang many concerts later in the metro. V.V. Sundaram also spoke about his experience of inviting Ponnammal Mami to the U.S.A. for the Cleveland festival and the warmth she exuded during the entire trip and performances at various venues. She was such a noble person, grace personified. He further remarked that a house-full audience for a book release function stood to prove the respect the rasikas had for Ponnammal and her music.

Cleveland Sundaram released and handed over the first copy of the book Hemavathi to vidwan R.K. Shriramkumar. (The 241-page finely designed book is priced at Rs. 320.)

Guruji Kasi Viswanathar of Sri Vedavyasa Tapovanam, Chennai, in his anugraha bhashan, recalled the special regard and relationship Ponnammal had with the ashram where she used to sing a concert on the first day of January every year. The Swamiji spoke on the values held by the vidushi and the purity she maintained in her music.

C. Ramakrishnan, co-author of the book, proposed the vote of thanks. He also acknowledged the warmth and hospitality extended by Parassala Ponnammal and family members during his visits to their house in Tiruvananthapuram.

The concert on the first day was by Amritha Murali who had won the fond appreciation of Parassala Ponnammal and who had earlier accompanied her on the violin at the Navaratri Mandapam. In this concert Amritha was accompanied on the violin by R.K. Shriramkumar, Mavelikara Rajesh (grandson of Mavelikara Krishnankutty Nair, legendary mridangam vidwan of Kerala), N. Guruprasad (ghatam) and Anirudh Athreya (khanjira). Amritha Murali presented a fine concert consisting mostly of Ponnammal’s favourite choices -- Merusamana, Narasimhamamava, Dvaitamu sukhama and Amba Kamakshi rendered as the main kriti of the evening.

Aswati Tirunal Rama Varma, who was instrumental in Ponnammal singing at the Navaratri Mandapam, graced with his august presence, the concert of Lalitha and Lakshmi (granddaughters and disciples of Ponnammal) who presented a recital on the evening of the second day of the festival. It was an honour for the artists as well the organisers and rasikas that the descendant of Maharaja Swati Tirunal was present on the occasion to appreciate the music of the sisters.

The main concert of the second day was by Parassala Ponnammal’s disciple Gitakrishnan from Tiruvananthapuram, accompanied by Chidambaram Badrinath (violin) and Guru Raghavendra (mridangam). Gitakrishnan initially learnt from his father Raghunathan Nair who was a student of Ponnammal teacher. He included the Yadukulakambhoji swarajati, the navavarana kriti in Sankarabharanam and Devadeva in Todi -- a composition of Swati Tirunal popularised by Semmangudi and Ponnammal. A brief ragam-tanam-pallavi in Hemavati (on Ponnammal) was imaginative. He also included a kriti by Harisundar. The accompanists offered fine musical support.

The third and final day started with a listening session of Parassala Ponnammal's national programme radio concerts – this was presented by E.N. Sajith, Regional

Director, Indira Gandhi National Centre for Arts, Thrissur, who also learnt from Ponnammal. Merusamana, Marivere (Latangi) and Todi raga for Sree Venkatesam varam of Poochi Srinivasa Iyengar were the highlights. It was a good recording and one of the best of Parassala Ponnammal's radio recitals. The speaker also touched upon the teaching techniques of the guru.

The concert of the final day was by Palghat Ramprasad accompanied by L. Ramakrishnan (violin), Thrissur Narendran (mridangam) and K.V. Gopalakrishnan (khanjira). The sprightly concert that started with Seetamma mayamma included Rave Himagirikumari, and a ragam-tanam-pallavi in Kanada among other compositions. The ace accompanists embellished the recital with excellent support. Ramprasad is another young vidwan who had earned the special appreciation of Ponnammal.

It was a happy coincidence that the main concerts of the festival covered all the three swarajatis of Syama Sastry without any repetition. These musical gems were very dear to Ponnammal teacher.

At the end of the festival, one felt immersed in the legacy of Parassala Ponnammal and her pure music. Good attendance by rasikas on all three days was sufficient proof of her noble achievements in the field of music and her admirable qualities.