Prof. A. Janardhanan in conversation with Bhavani Ravindran: 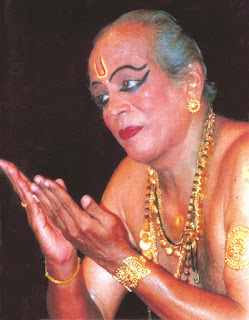 I called upon the veteran artist and natyacharya at his home on 14 May 2022. I found Prof. Janardhanan to be very humble despite his achievements. Though he does not boast about it, he has all the productions of Rukmini Devi etched in his memory. He was and still is, able to recall to the minutest detail all that went into the original productions. This is what has helped revive all these phenomenal pieces of dance choreography which were in danger of extinction. We, as the viewing public and rasikas, owe a lot to Prof. A. Janardhanan for even this one great service to his alma mater without which we would not have been able to enjoy the masterpieces created by Rukmini Devi several decades ago. Some excerpts.

Rukmini Devi ‘Athai’ was a fountain of knowledge and innovation. She could comprehensively visualise all aspects of a dance production -- stage setting, costume designing, musical arrangements, dance movements, and abhinaya. Her vision was all-encompassing and she had truly great artists and teachers to assist her. She drew people to her like a magnet and each was a giant in his or her field. The stage backdrop by Srinivasulu was always breathtaking and suited her way of visualisation. There was no room for compromise and perfection was the only way to complete a sequence.

In contrast, my teaching is very minor in comparison -- to the extent that it is fairly uncomplicated. I teach what I have learnt. I do not have to really worry about the other aspects as they are already there. Athai was created from scratch, whereas my job is to see that it is followed to the letter and not allowed to die away. My contribution to art in Kalakshetra is akin to what the squirrel did to help Sri Rama.

On Selection of Dancers

Athai chose people for a character by her ‘feel’ of the person’s ability. She would say that dance is the fifth Veda and cannot be taught to everyone; if not properly chosen it would be like asking a drunkard to recite verses! I do not know why she chose me for the role of Sri Rama. She used to treat me like her son. Perhaps she had a soft corner for me as my father was also in Kalakshetra at the time! This is only my thought, I really don’t know the true reason. My father, Chandu Panikkar performed on stage at the age of 85, maybe Athai felt that being his son, I too would be able to live up to her expectations! Many people used to feel that Athai was always choosing the same people for prime roles. She would then remark that if you can find someone who can do better than the persons I have chosen, I will gladly keep them! Among us, there was no problem with who got which role, our faith in the judgement of Athai was total, and none of us had any ill feelings towards one another. This was probably due to the discipline with which we were brought up in Kalakshetra.

Here an incident comes to mind. During one performance of Sabari Moksham, the main spotlight fell down just missing me; I could have been grievously injured had I been one foot in the wrong direction in the path of the falling light.  The stage was plunged into darkness, it was pitch black with only the burning lamp for Nataraja giving some light. No one moved, it must be said that the audience too did not utter a single sound, Kalakshetra audiences are like that! Athai quickly got up, in the darkness she got the debris cleaned and restored the lights. This took three minutes. When the lights came on, all of us were frozen in exactly the same posture and expressions that we were in when the lights went off. The show continued from that point perfectly and smoothly. That is the discipline of Kalakshetra and I am proud to be one of them.

I am eternally blessed to have been in the midst of a galaxy of great artists who taught us. They taught us like we were their children, not students of an institution where they were employed. They gave their all without holding back. It was an amazing commentary on the noble art of teaching.