‘Rasa abhinaya’ is a key terminology that dancers are exposed to over the years. It emphasises aesthetic communication with a creative interpretation of the lyrics and music. This idea of the art of communication employed by the artist to provide an artistic experience to the audience in blissful settings, sans percussion, was what I experienced during Raasaabhinya 2022. It was organised by Samskruthi - Temple of Art, headed by Sathyanarayana Raju in association with the Bengaluru shaakha of the Association of Bharatanatyam Artists of India (Abhai), at Vyoma Art Space in Bengaluru in the first week of May.

It is indeed a challenge to present only abhinaya compositions in performance. Sometimes the repertoire gets limited to a few compositions, but what stood out in this festival was how each artist used his/her life experiences, knowledge of the world, individual understanding of classical literature and sastras, as well as other allied arts – all of which enriched the content of the whole festival thus giving us a taste of true ‘rasaanubhava’.

Having closely watched and been associated with Padmini Ravi over the years, I have been in awe of her work, though she sometimes experiments with dance and music in a ‘neo’ way. This time, even though the music sounded neo, her approach to the pasurams, which related to advaita, Vedanta saguna and nirguna was profound. The way she conveyed abstract points like looking beyond the outer surface wherein we all live and the infinite truth that the almighty resides within us, set an ambient opening tone to the festival. It specifically created a calm atmosphere captivating the sahridayas and taking them along with her.

Deepak Mazumdar has this quality of transforming from a coy love-struck heroine to a playful child Krishna, thereon to a devotee who immerses himself as he watches his Lord. Quickly and easily he brought alive the characters in front of you in a moment that made you wonder how easily he glides into a gender fluidity as he transcends from one character to another. Though he had woven together a few passages from different songs, it was quite a revelation how just a few lines if well done, can create rasa symbiotically as if it were one-story unfolding slowly.

It is said that the life of a Kuchipudi dancer is incomplete if he/she does not play Satyabhama’s role. The haughtiness and stylish gait, contrasting with the subtle and coy way she utters the names of Krishna—were all beautifully brought out by Veena Murthy Vijay. Kuchipudi is known for its usage of vachika during the performance and she spiritedly used the narratives by juxtaposing with current trends—thus bringing in humour, leaving the audience in splits of laughter. Another interesting aspect of Satyabhama’s character is the description of the unique jewellery that she wears from head to toe—which the artist herself describes; this was very interesting to watch. What is common between the popular song Pyar kiya tho darna kya from the movie Mughal-e-Azam and the traditional padam Yarikagilum bhayama? Well, both the songs express the feelings of a nayika who was bold enough to express her love in public. When we closely observe the lyrics of these songs, the intent and the content are similar, but each of them was composed at different times for a different journo. Only a dancer with a vast experience in performance and intellect in creating works can come up with such a unique concept—and it was none other than celebrated artist Prathibha Prahalad. If a sakhi went pleading to Krishna to go to Radha in the ashtapadi Natha harey, the counterpart showed the heroine’s condition through another film song which was classical based Neela aasman. The bridge between traditional culture and popular culture was beautifully juxtaposed giving new artistic resourceful initiatives for all the dancers who had arrived there to witness art at its best. The artist informed in the beginning that she was paying a tribute to Lata Mangeshkar via these compositions. 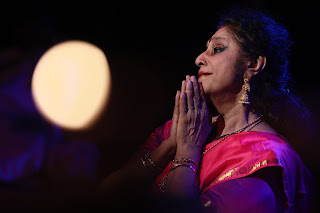 When you watch a senior guru perform it is not the accolades and number of performances she has given that matters, but the art in her that speaks. This was evident as one watched Chitra Visweswaran dance. The poise, the delineation and the satvika aspect kept the audience rapt in silence and stillness even after she finished her presentation. Nobody was in a mood to wind up, it was a moment of tranquillity, which transported me to the world of the unknown as tears rolled down. Every eye in the intimate space was moist. We understood the sahitya, but it was the inward journey of the artist which came across and took us all along. The hymns of Siva, Devi and Vishnu were soaked in quietude where even Sathyanarayana Raju’s detailed aesthetics which had set the stage with bright colours and fragrant accessories melted into the background.

All the musicians who accompanied these artists contributed equally in giving us the rasa. As dancer Lakshmi Gopalaswamy said “The festival was very special, an experience not had in years. It was a magical amalgamation of exemplary artists sharing their vast and personal experiences in art and life, willingly received by a kind, supportive and enthusiastic dance community. The compact studio Vyoma and aesthetic setting helped blur the boundaries between the artists and the rasika, allowing for a collective experience that was moving and transformative”.

As I was walking towards the exit I heard a rasika eagerly asking: “When is Rasaabhinaya season two?”